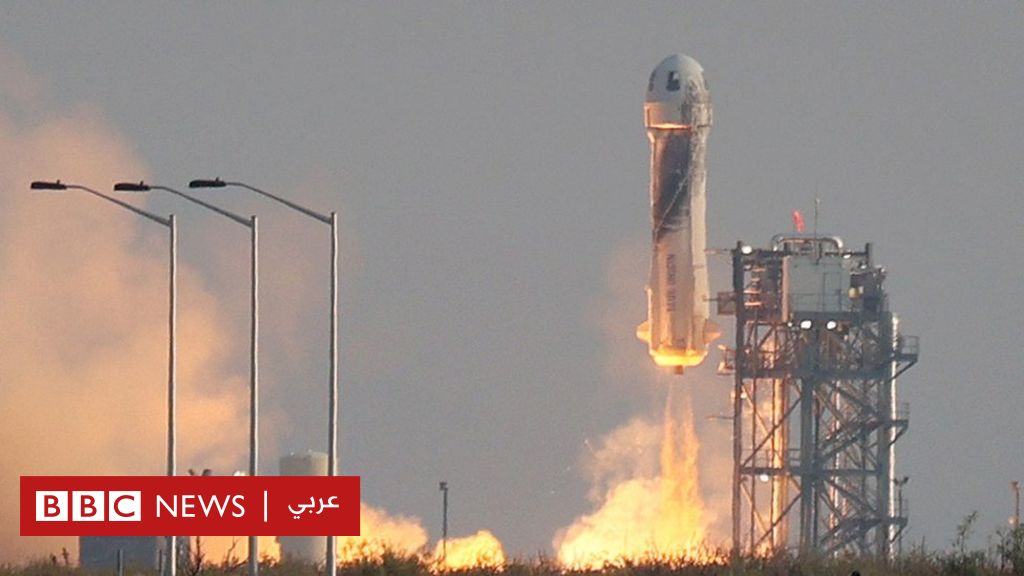 Billionaire Jeff Bezos returned to Earth after fulfilling his dream of space travel Tuesday on the first manned flight of his New Shepard rocket ship.

Accompanied by his brother, Mark Bezos, Wally Funk, an 82-year-old pioneer in the space race, and an 18-year-old student, Bezos spent a few minutes at an altitude of 107 kilometers beyond the Karman Line, the line between Earth and space.

Everyone traveled to space in a capsule with large windows, allowing them to see stunning views of Earth.

The astronauts were able to contemplate the planet from space through these large windows that occupy a third of the cabin space. “It’s all black here,” Funk said over the live audio feed from the capsule.

After the capsule reached its maximum altitude, about 106 kilometers (350,000 feet), it began descending on its return journey. The capsule descended in free fall before deploying three huge parachutes to land smoothly in the desert after a flight of about ten minutes.

The four passengers, who were in good condition upon leaving the capsule, were greeted with cries of joy from the “Blue Origin” teams, and Bezos appeared wearing a cowboy hat at the moment of his return.

The rocket that carried the capsule spontaneously returned to a landing platform near the launch site.

Among the passengers were the oldest human to travel to space, former astronaut Funk, and the youngest student, Oliver Damon.

The spacecraft was launched at 14:12 GMT (09:12 EST) from a special launch site near Van Horn, Texas. The passengers then parachuted into the West Texas desert 11 minutes later.

Two minutes into the flight, the capsule detached from its rocket and continued its ascent toward the Karman Line – the most famous frontier in space, at an altitude of 100 kilometers.

Passengers felt weightless for about four minutes and were able to leave their seats to float and enjoy views of our planet below.

“People who have boarded – astronauts – say they can see how fragile the Earth is,” Bezos said before the flight.

“The views will be fantastic, and ground zero in terms of gravity will be an extraordinary experience that you cannot know in any good way on Earth.”

Funk said before the flight that she was looking forward to doing somersaults and falls during microgravity.

They underwent the same screening tests as male astronauts, but they have never flown into space.

She is the oldest person in space. But she told CBS News, “I feel like 24!”

“Wali can outperform us all,” Bezos said. “She was during the Mercury 13, better than all men, and I can guarantee that is still the case today.”

Bezos recently resigned as CEO of Amazon, the e-commerce giant he founded, in order to focus on his other projects, including Blue Origin.

His brother Mark, 53, is a senior vice president of the New York-based Robin Hood Charitable Foundation.

The fourth passenger is the son of financier Jose Daemon, who founded the Dutch private equity firm Somerset Capital Partners. Oliver was originally given a seat on the second flight, but was put on the flight to replace the unknown winner at auction.

The unnamed winner, who paid $28 million to join Bezos on the New Shepherd’s first manned flight, was forced to withdraw “due to a scheduling conflict”.

Bezos and Sir Richard Branson have come under fire on social media, with users saying space money could be better used in other areas such as tackling climate change or helping the world recover from the pandemic.

Sir Richard responded to the criticism, saying: “I can understand that, but I think whoever says that may not be fully aware of what space does to Earth.”

He explained that satellites monitor “the degradation of rainforests, they monitor the distribution of food – and even things like climate change,” adding: “We need more spaceships going into space, we don’t need less.”