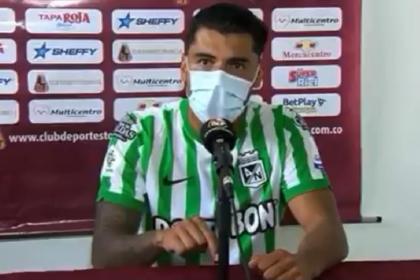 Jefferson Duque is in the eye of the hurricane. The Atlético Nacional captain will be investigated for his statements at the press conference, after the match in which his team was eliminated by Deportes Tolima from the Colombia Cup.

On that occasion, those led by Alexandre Guimarães fell 2-0 in front of the posh team, which unleashed the discontent of the purslane leader, who did not answer any questions in the media attention and described his performance and that of his teammates as a ‘shame. ‘.

“I wanted to come here, on behalf of the group, to put my face, to apologize to all our fans, to apologize to the ‘teacher’ because the truth is that this happened is a shame”, were the words of the forward on 21 January.

Now, in the run-up to the third date of the League, it was known that the attacker was opened an investigation in Dimayor, after his behavior at the press conference, and, therefore, he could receive a sanction.

“Under investigation. Events that occurred at the Atlético Nacional club press conference in the second leg of the quarterfinals of the BetPlay DIMAYOR Cup 2020 against Club Deportes Tolima SA”.

Thus, a resolution of the entity is expected to know if the purslane gunner will have some kind of punishment after what happened at the Manuel Murillo Toro.

Nacional’s next challenge will be this Saturday against Deportivo Pereira, at the Atanasio Giraradot.