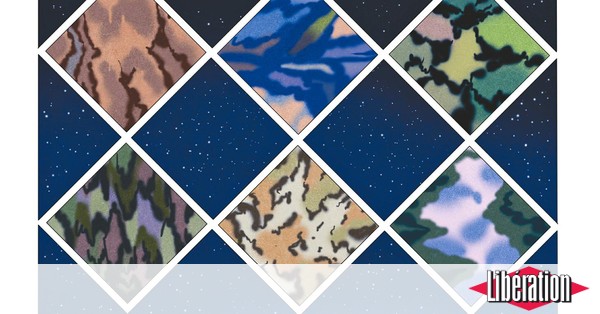 We cannot say whether this is due to an immaturity of the drawing which does not manage to settle down or, on the contrary, to a form of modesty full of doubts which leads Jérémie Moreau to seek new features. But it is very difficult to connect plastically the panther’s speech to the previous comics of the designer living in Drôme, the Grimr Saga, published three years ago, and Thoughts and folds of the world (2019). Others than him would have felt validated by this award for best album in Angoulême for Grimr and would have settled comfortably in this black drawing highlighted by a telluric watercolor. Far from the open line that led to confuse the state of the characters and the bewitching landscapes of medieval Iceland, far from the Penny who squinted towards Osamu Tezuka (especially in the insert of small boxes-close-ups), this Panther is endowed with an almost animated circle, perfectly closed line which would call almost to be animated industrially. A reminder, no doubt, of his first life in animated cinema, Moreau having gone through the Gobelins before being character designer for Despicable Me 2 or the Lorax. However, the author does not suffer from the tic which would consist in wanting to draw everything, to break down each movement in its entirety. This return to the digital tool also corresponds to a transformation of his treatment of color, less organic but no less splendid, somewhat reminiscent of the work of Belgian Olivier Schrauwen or of cross-experiments in the magazine Lagoon.

If the shape cuts radically, the panther’s speech fits perfectly, by its tone and its concerns, in the sequence of research on the question of naturalness opened by Grimr. A journey that takes a step away from an anthropocentric appreciation of the world, the human being here evacuated from the spectrum until this final fall where a distant cousin sneaks in. Composed of a series of animal fables, the speech does not give in the anthropomorphic imagery so familiar in comics. Rather than serving as masks for humans or values, the elephant, the mouse and the fish serve more to question the relativism of being to the world and the imprint that living beings leave there. When a pachyderm with an elephantine memory, but crushed by the weight of the years, tries to transmit to his grandson the history of the origins through a saga of great events, a macro view based on a strong hierarchy of information , the mouse, for its part, challenges this knowledge in favor of a micro approach, each individual of its species being entrusted with the memory of a day even in its most minute and ridiculous adventures; while the fish observe the interconnection of things on the scale of the amoeba and the microsecond. If Moreau opts for the fable, there is no right morality here, good or bad, only people in the world that are different. In a few words, he builds splendid tales that stretch beyond the page, empowered by the violent innocence of children’s story. At the end of the fate of a starling who, refusing to let himself be trapped in the migratory flows of his family, burns his wings by joining the race of marathon swallows, the young author touches on elementary forces, captures the invisible color of things in capturing all at the same time their appearance, their warmth, their smell. For the duration of a magnificent page, the stray birds, which have found refuge on the back of a Noah’s rhino-ark, sing the world they have traversed at wing speed in a kaleidoscope reflecting the landscapes-coats they got drunk.