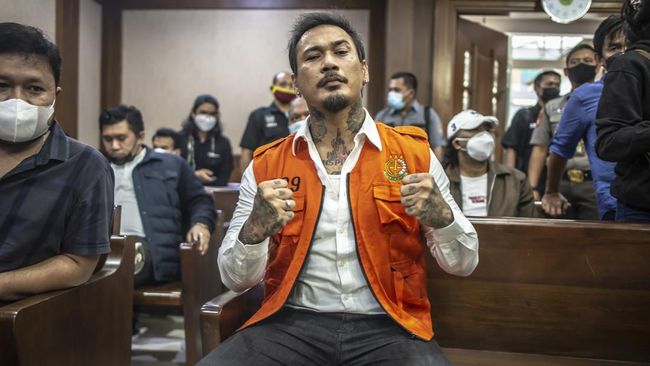 I Gede Aryastina aka Jerinx SID expressed his complaint after the trial of the threat case that made him sit as a defendant.

Jerinx holds a printed photo of a person showing his middle finger while holding a photo of President Joko Widodo. According to him, the alleged photo Adam Deni it was uploaded by Ni Luh Djelantik.

“This is not an edit, this is an original photo of a young man who doctor Tirta recognized with the initials AD. So this photo is currently viral in Bali, you can check it on Mrs. Ni Luh Djelantik’s Instagram,” said Jerinx after the trial at the Central Jakarta District Court, Tuesday (25 /1).

“So I only ask that if it is true that in this photo is a brother of the Army, and Tirta has also acknowledged that this is AD, then I ask the police to be fair, so that they will be processed as well,” added Jerinx.

He asked the police to investigate the viral photo that was allegedly taken in 2020. The reason, according to Jerinx, what he did was not comparable to the act of insulting the president.

“He insulted the number one person in Indonesia but was never processed. While I only fought with him, cursed him, challenged him to a fight, I was sentenced. I was in jail, while he was safe,” he said.

Furthermore, Jerinx quipped AD’s words when he revealed that AD had forgiven Jerinx but would not forget his threatening actions.

“Yesterday AD said if he forgives me but he won’t forget, well I hope Mr. Jokowi can forgive him, but don’t forget him either,” Jerinx continued.

Jerinx also expressed his suspicions about the AD statement at the Raffles Hotel. At that time, AD said he had a boss who had more power than the President.

Previously, Adam Deni admitted that Jerinx threatened his head to be stepped on the sidewalk. At first, Adam explained that Jerinx contacted him by phone and accused him of deleting Jerinx’s Instagram account. According to Adam, Jerinx also threw harsh words in a high tone.

Adam later explained to Jerinx that he was not involved in the disappearance of the Instagram account which had more than 1 million followers. However, Adam said, Jerinx didn’t believe him and continued to harass him indiscriminately until he uttered harsh words and threats.

Through his wife’s cellphone, Nora Candra Dewi alias Nora Alexandra, Jerinx accused Adam of being a hacker and deleted his Instagram account @jrxsid. Jerinx made the accusation with harsh words.

College football on free TV: How to watch Georgia vs. Michigan live on TV – US SPORT