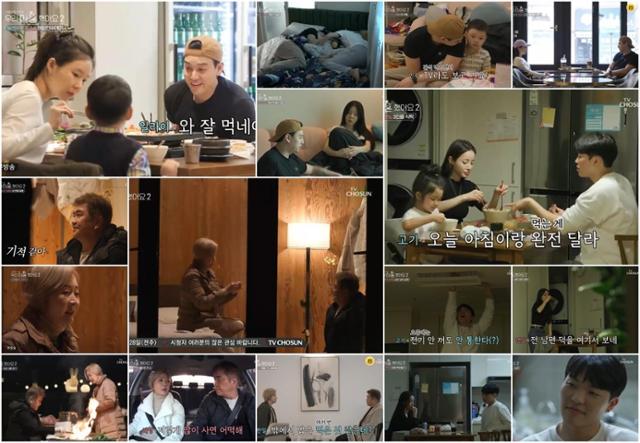 ‘We Got Divorce 2’ raised the topic of a new reunion of former couples. Provided by TV Chosun

‘We Got Divorce 2’ raised the topic of a new reunion of former couples.

The 4th episode of TV CHOSUN’s real-time drama ‘We Got Divorced’, aired on the 29th, recorded a nationwide rating of 7.0% and the highest rating of 9.0% per minute, according to Nielsen Korea, a ratings research company, taking the first place in ratings among programs aired at the same time. Mercury.

On this day’s broadcast, Na Han-il Yoo Hye-young, Eli Ji-yeon-soo, and Choi Ki-gi Yu sesame leaf gave a special impression as they understood each other’s point of view, read extensively, and made a real reconciliation.

First, Eli and Jiyeon-soo spent the night together with their son Min-soo’s earnest wish, and continued the conversation the next day. Ji Ji-soo brought up the conflict with Eli’s parents once again, and said to Eli, “It was difficult because I only had Eli as a son.”

“My parents are not like that,” Eli said. Is it a sin to want to live as a son?” “I was the object of your anger. He raised his voice, saying, “You have listened to all the stress at home,” and Jiyeon-soo said, “Deaf for 3 years, dumb for 3 years, and blind for 3 years. I’ve lived like that for 9 years.” Jiyeon-soo was crying, and Eli said, “You said you endured it, but in the end you did not.” “I endured a lot too. I was also going to give you your shield, and I was going to do it.” After protesting, “How long do I have to fight for this? Do you want to continue living in that memory?” he asked frustrated.

Eli, who went outside for a while to calm his emotions, said to Ji-yeon, “Let’s just think about how we will live in the future,” and “I will do everything I can to the best of my ability while you live with Min-soo.” The two, who accepted each other’s sincerity, headed to the cafe together, and Jiyeonsu confessed that she was worried that Minsu would get hurt while waiting for her father.

At this time, Eli asked, “What if I come in and live?” Ji Yeon-soo confessed that there were moments when he needed a father role despite his efforts, and asked, “Would you like me to tell you that I want you to live in Korea?”

Eli answered, “Everyone wants to be someone someone needs,” raising expectations for a change in the relationship in the future. At some point, it was time for Eli to go home, and Minsu grabbed Eli again and begged him to live with him. In particular, when Minsu said, “Dad is now a guest at our house,” he replied, “He’s not a guest. my dad is my dad So you have to live your life We’re a family,” he said, making everyone mourn.

The couple Na Han-il and Yoo Hye-young met again at the filming location of the drama ‘The Windless Zone’, where they joined two weeks after their first meeting, and attracted attention. Na Han-il tells Yoo Hye-young that she is talking about her travels, and she asks if there was a time she was most angry with herself. Yoo Hye-young made Na Han-il embarrassed by revealing an anecdote that she did not speak to her for a month, mentioning that she was an hour late to her birthday party when Na Han-il was with her acquaintances in the past.

Na Han-il asked Yoo Hye-young, “Do you think I have changed a lot?”, and Yoo Hye-young replied, “It has changed so much,” and then took out the engagement ring and necklace of the two, which he had cherished for 34 years, and surprised Na Han-il. Na Han-il put a ring on Yoo Hye-young’s finger and hurriedly said, “If the circumstances arise and ask you to reunite, are you confident that you will do it?”, and Yoo Hye-young thought for a moment and said, “Now, I look good with a good heart, but it might be difficult. . “I think it might be good if we go beyond that completely and go one step further,” she replied.

Na Han-il asked again, “I can have hope”, and Yoo Hye-young said, “Yes. Have hope,” she said with a bright smile. Hanil Na said, “It’s a miracle to sit and talk like this with you. I didn’t think something like this would happen to me. Do I have a late suit?” She was delighted, and Yoo Hye-young said, “I hope so,” and she smiled softly at Na Han-il.

Finally, Yu Sesame Leaf invited Choi Ki-ki and her daughter Pine Pine to their new residence in Seoul. The three of them had a long time together by eating feast noodles made by sesame leaves, and Choi Ki-gi and sesame leaves simmered in pine needles and continued their conversation. Yukaleip said, “I thought it was polite to tell my brother in advance when I had a boyfriend. I said it before my mother,” he laughed, and Choi Ki-ki told Yu Sesame leaf, “It has changed positively, has brightened up, and a lot of negative things have disappeared.” He evoked a heartwarming laughter with his mature appearance supporting him.

“Call of Duty” new work “Modern Warfare 2” officially announced! As announced in the sequel to the 2019 reboot version | Game * Spark