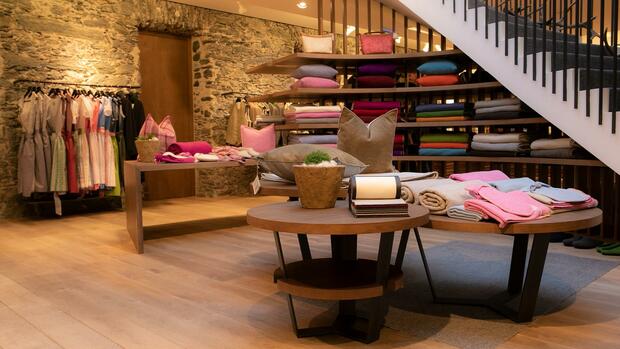 The traditional fabric is used for a number of products – Steiner shows this in the company’s own flagship store.

Wien The Austrian manufacturer Johannes Steiner now feels like an exotic, although he manufactures a product that many consider to be very traditional. He and his cousin Herbert run one of the last loden fabric factories in the Alpine region near the resort of Schladming.

Steiner1888 has existed for over 130 years, and the two cousins ​​are already part of the fifth generation of the entrepreneurial family. Many of Steiner’s competitors did not have such staying power. The 48-year-old entrepreneur estimates that there are still two loden producers in Austria and one manufacturer each in southern Germany and South Tyrol. “Many of our competitors have disappeared in recent years,” says Steiner. “And nobody seems to really miss her.”

The wool fabric loden has a somewhat old-fashioned image, even Steiner admits that. When it comes to loden, many consumers still think of bulky coats in hunting green. With such a product, however, one can no longer reach urban buyers these days. It is precisely this that Steiner wants to and must increasingly win over. “Today’s affluent consumers live in the city, not in the country,” he says.

In order to better meet the tastes of this clientele, the entrepreneur cooperates with the Vorarlberg designer Christian Weber. Together they have designed jackets and coats that are more fashionable in color and cut than traditional loden coats. With the new products, Steiner is targeting the so-called premium segment. He does not want to lead the competition by price. “There will always be a cheaper provider than we are,” says the entrepreneur.

The textile industry was once a key sector in Europe, but has been struggling to survive for decades. In Austria, too, fabric manufacture was an important branch of industry, especially in the west of the country. Today, however, according to the industry association, only 10,000 people work for the sector, about half as many as in 2000. Many manufacturers have perished, and the few surviving suppliers have specialized in niche products.

Steiner has been following such a strategy for some time now. The loden market is too small to be limited to just one segment or one sales channel. Last year, Steiner had 55 employees and generated sales of six million euros. In some years he has also achieved higher sales, he emphasizes.

Steiner sells around half of its fabric production to well-known fashion houses such as Yves Saint Laurent, Chanel, Hugo Boss or Jil Sander; The company processes the rest itself into jackets and coats, or it is sold as blankets and upholstery.

Business is characterized by strong cycles. In certain years loden is considered the latest craze by the big fashion houses; However, the fabric quickly goes out of style when designers prefer other types of textile for their creations. Steiner says of the customs of haute couture that you can get into business quickly, but also quickly out again.

But that’s only one reason why the textile market is considered difficult. In general, the business environment has continuously deteriorated over the past few years. Several fashion houses, for example, have gone bankrupt, which means that Steiner customers have been lost.

The entrepreneur runs the fabric manufacturer together with his cousin Herbert.

At the same time, the retail sector is in a difficult position. Long-established businesses cannot find a successor or have liquidity problems. As a result, sales stagnate: Asian manufacturers in particular are throwing cheap clothes on the market in large quantities, but European retailers are no longer able to sell all the textiles. There is simply too much product on the market, says Steiner. This depresses prices, and consumers are getting used to the fact that certain textiles cost almost nothing.

Steiner had to learn to deal with such imponderables. He benefits from the fully integrated production. This allows the company to quickly adjust the range if demand changes.

Wool from Australia, machines from Germany

In the attic of Steiner’s production hall, huge bales of wool are piled up. 80 percent of it comes from Australia. The wool is dyed, spun and woven on site. A tour of Steiner’s factory is also a journey through time in Europe’s industrial history. In the company’s production halls, machines from well-known German, Swiss and Italian manufacturers, some of which no longer exist, pound and rattle.

The actual loden is created at the end of the production process by the so-called fulling. Mechanical hammers then hit the woven fabric with such great force and with the use of water that it becomes matted. This creates a textile product that warms and repels moisture.

And these are exactly the properties that certain of Steiner’s customers attach great importance to. For example, the Norwegian Navy gets its uniform fabrics from the Austrian company. The demand from Scandinavia has recently become somewhat weaker, says Steiner. He attributes this to the lower oil price. Norway must also pay more attention to finances. The country is still a regular customer of loden fabrics.

But the example of Norway shows how global economic upheaval affects even a medium-sized company in the Austrian Alps. The demand for textiles is currently more unpredictable than ever, also as a result of the Covid-19 pandemic.

In the spring, for example, furniture covers made of loden were particularly in demand, says Steiner. Private individuals and hoteliers had apparently used the lockdown to freshen up the facility. On the other hand, purchases by fashion houses have declined. And the demand for fabric from cruise ship operators even collapsed. Last year they had ordered tablecloths made of loden, but now the tourism crisis has brought them economic problems.

Such turbulence forces Steiner to constantly look for new uses for loden. He recently created a loden seat cover for a chairlift. “That saves the seat heating,” says the entrepreneur. And ultimately, the many crises also motivated him to deepen contact with end users. During the financial crisis of 2009, Steiner built a visitor center for this purpose. Tourists should get an insight into the production. The visitor center is, says Steiner, a kind of bad weather offer for Schladming holiday guests.

More: Fair fashion instead of Wiesndirndl: the Almliebe founder creates a second mainstay.