What is the experience of participating in a concert in the cloud? Co-created by Kugou Music, Kugou Live and Guangzhou K11 Shopping Art Center, the “Cloud “Green” Moving” fully immersive concert exclusively named by Haval Kugou will be held on October 10 Officially opened from October 14th to October 15th. Recently, the official announcement of the concert guests: the new generation of singer-songwriter ODD Chen Sijian, the all-round singer Xilinnayi Gao will airborne “cloud”, creating a full sense of cool aesthetics. Audiovisual feast. 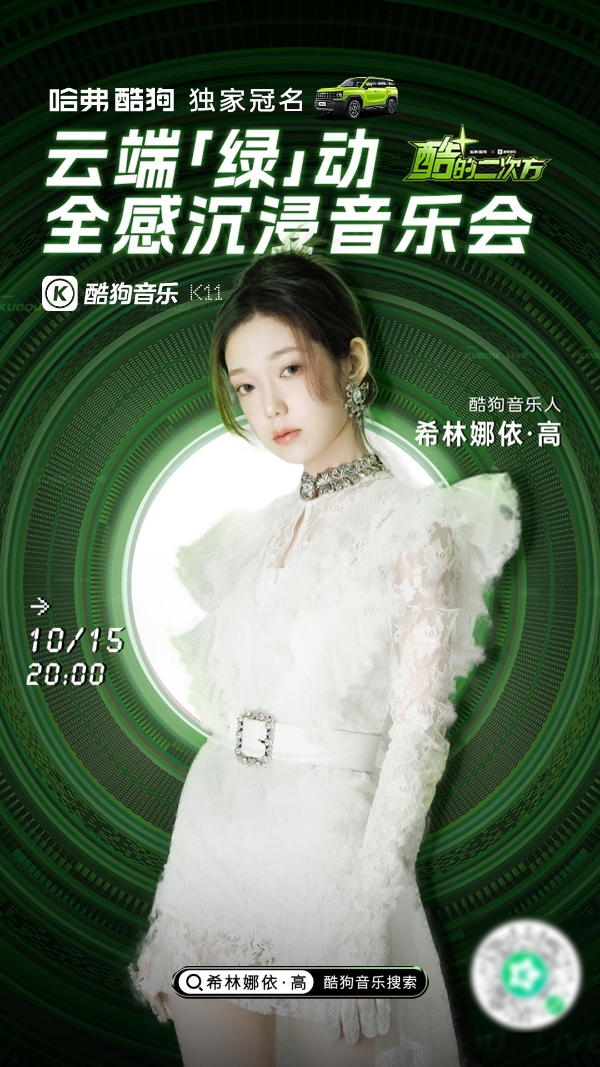 This “Cloud “Green” immersion concert has a customized main stage with a sense of art and technology, using installation art, interactive art, fusion and collision to create a multimedia visual feast of cutting-edge pioneers, providing music fans on site and online. They bring an extra-sensory immersive art experience.

Xilinnayi Gao, who was invited to join, has a unique timbre and a youthful and lovely “international face”, and her natural sense of fashion fits perfectly with K11 and Haval Kugou; another ODD, Chen Sijian, can play in many Switching between various musical styles, as a well-known local musician in Guangzhou, he also added more Guangzhou elements to the concert. 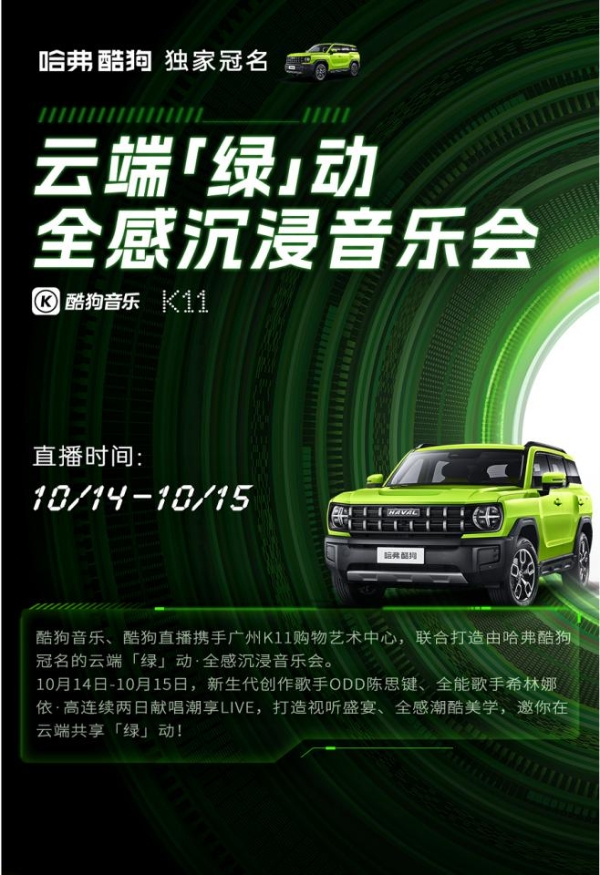 Before that, Kugou Music and Guangzhou K11 Shopping Art Center have jointly created a number of music LIVEs. The high-quality and high-level performance content has won wide acclaim and high reputation among music fans, fans and the industry. With the addition of Haval Kugou, the three parties will jointly create a more diverse technology-based music scene and new ways of playing music technology. At the same time, the concert will be broadcast live through the Kugou Live APP, and singers and fans will gather in the cloud to control the “full sense of “green” movement” together.

In addition to the concerts, many music technology experience spaces were also set up at the event site. While enjoying the performances brought by the singers, fans and fans could also experience the enhancement of the diversified musical sense brought by technological innovation.

As a partner of Kugou Music, the “Green” immersive music in the cloud is the third stop of Kugou Music and Haval Kugou’s “Cool Quadratic” music dream plan. This time Haval Kugou makes music Fans can experience the exclusive happiness brought by “mobile KTV” at the event site – the 18-speaker 4D sound-burning cockpit matched with Haval Kugou can create the ultimate audio-visual experience comparable to that of a concert hall. The rhythmic seat allows the body to rhythm along with the music, and with the Leishi KTV system, it seems to start a 4D sound-burning Live concert, which completely allows young people to release their music-loving instincts. 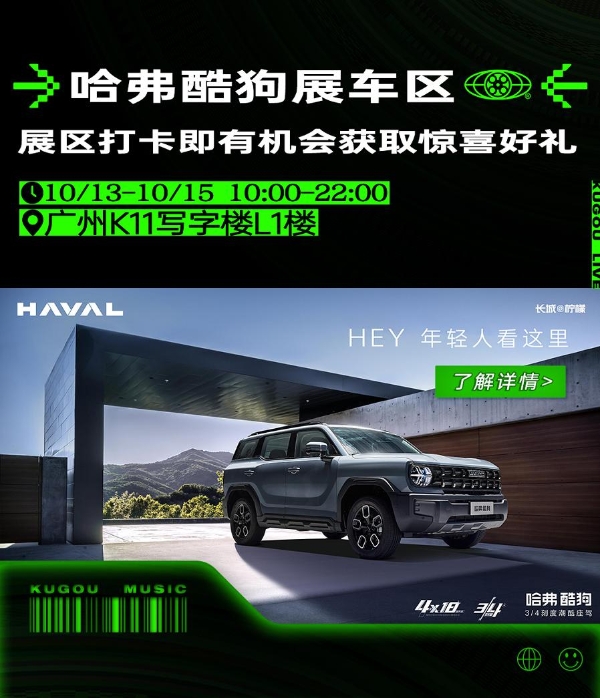 In addition to Haval Kugou’s “4D Sound Burning Cockpit”, in the “Kugou Music Viper Sound Effects Experience Zone”, fans can also get creative sound effects brought by Kugou’s digital audio processing technology. A leap in 3D music. For example, the “concert sound effect” allows music fans to get the shocking effect of being in the music scene, and it can also simulate the sound characteristics of different spaces such as “gymnasium” and “opera”, and restore the listening songs in the auditorium from different angles. experience. 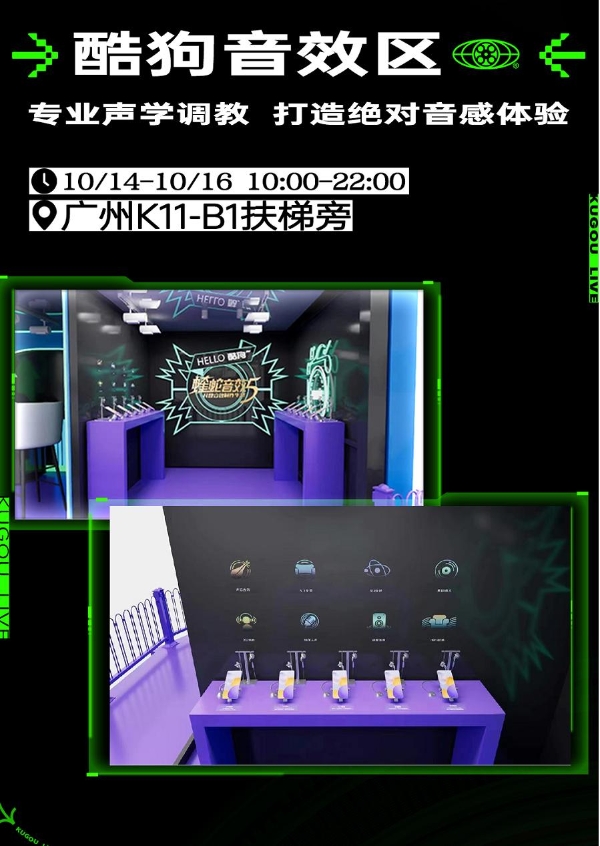 In addition, the “Haval Kugou car sound effect” created by Kugou Music will be displayed for the first time. Equipped with integration, passengers in every direction in the Haval Kugou can enjoy the stereoscopic surround sound effect with rich layers.

Kugou Music and Haval Kugou have also prepared the benefits of offline recording of the “Green” dynamic immersive concert on the cloud platform for young people with individuality, coolness and diversity. Music fans and fans only need to log in to Kugou. Gou Music APP searches for “Haval”, shares the special page of “Youth must be unrestrained and cool”, and publishes a comment on[that song you listen to the most in the car]to receive the qualifications, and then you can participate in this music in which music and technology are intertwined and integrated. Yes! On October 14-15, we will meet in the cloud, see you soon! 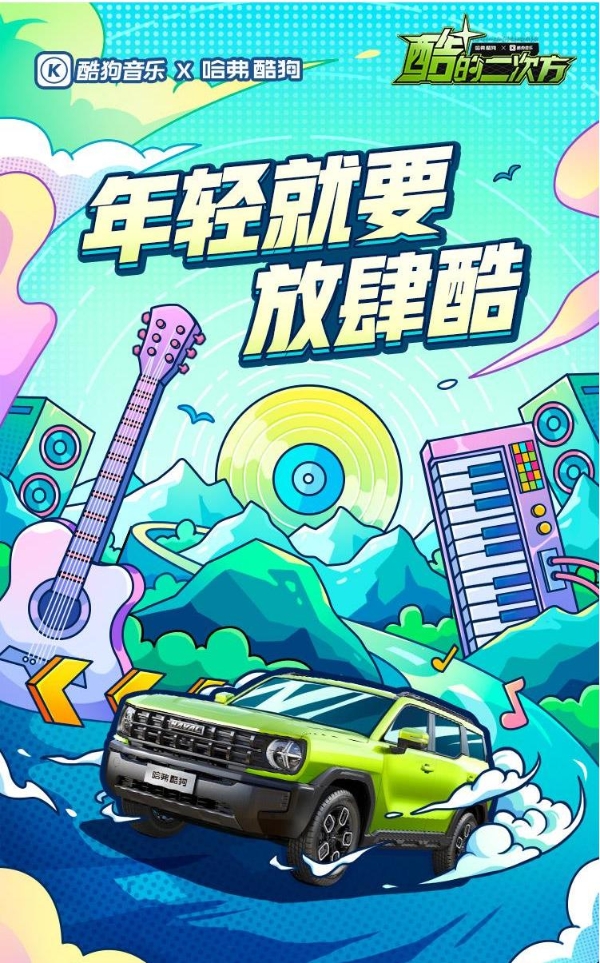 Real estate credit: the idea that banks are pushing to accelerate the rise in rates