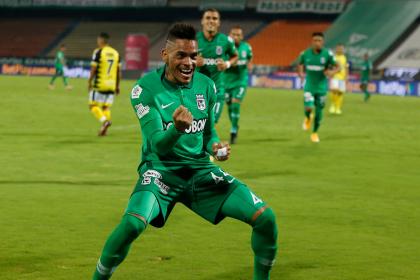 It was not a good season for Jonathan Álvez at Atlético Nacional. With just three goals in 25 games played, the Uruguayan forward could leave the team for the second half of the year.

With the departure of Alexandre Guimaraes from the technical direction, the possibilities for the former Junior to leave the Antioquia cast increased, and it is that of course, Álvez, who is criticized by the fans, was one of the fixed in the Brazilian DT’s scheme.

Given the situation, it transpired that Álvez had a great possibility of returning to Ecuador, where he was a scorer and a figure, to join the discipline of Guayaquil City; However, this option is nothing more than a rumor, after the Ecuadorian media Ecuagol, He will inform that the Uruguayan attacker is not in the team’s plans.

“Ecuagol learned from a direct source in Guayaquil City that Uruguayan striker Jonathan Álvez will not play for the club, as speculation began.“says the medium.

Thus, the situation of the Uruguayan in Atlético Nacional is a complete uncertainty after finishing a season for oblivion. Meanwhile, the purslane team is in search of a new coach to face the BetPlay League 2021-II.