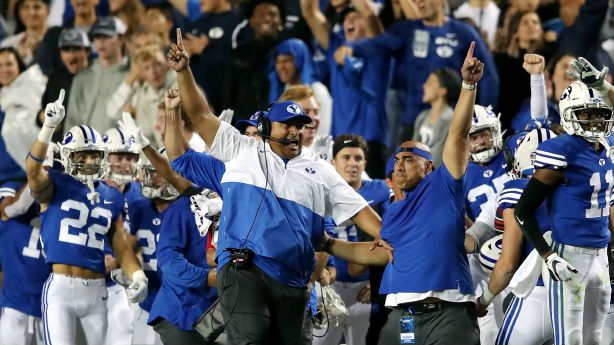 Brigham Young Cougars head coach Kalani Sitake and the rest of the BYU sideline begin to celebrate as they defeat Utah in an NCAA football game at LaVell Edwards Stadium in Provo on Saturday, Sept. 11, 2021. BYU won 26-17, ending a nine-game losing streak to the Utes. (Scott G Winterton, Deseret News)

PROVO — The day started out so promising for the Pac-12: Oregon did what the conference hadn’t done in a long time.

The Ducks went into enemy territory against a top-5 program and came away with a win as the better team against Ohio State. The impact of the game, however, did not make its way to the rest of the conference.

Washington forgot how to play football, USC dropped a conference matchup against a Stanford team that got beat up by Kansas State last week, California lost in a close game to TCU, Arizona got destroyed by a Mountain West Conference team, and Utah got outplayed by its rival BYU.

The roller coaster ride of the Pac-12 continues, but it leaves fewer teams with an opportunity to be ranked this week in my Associated Press Top 25 ballot. I moved Oregon up to No. 6 for their impressive win, but dropped USC and Utah out of the rankings completely.

If you can’t see my ballot below, click here.