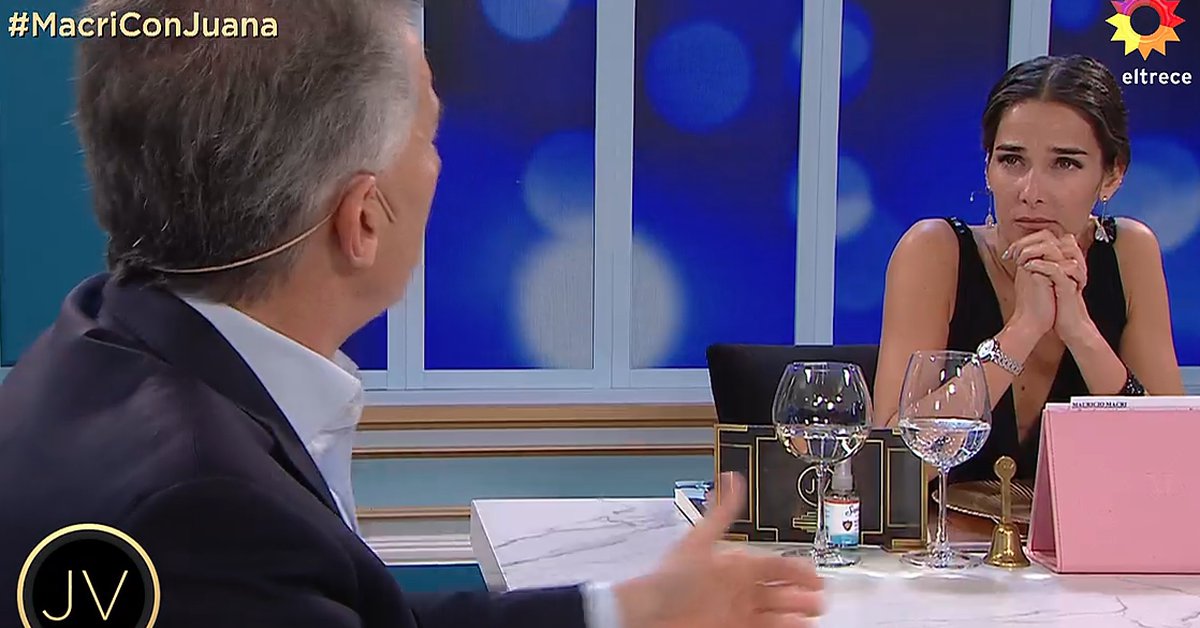 “It’s cold and what better than to stay at home and see ElTrece”, He said just after 9:30 pm on Saturday Juana Viale to greet the audience that follows her on her grandmother’s show, The Night of Mirtha. In a black natural silk organza dress with an embroidered waist, mega neckline and slits by Gino Bogani, the actress anticipated: “I know there is a lot of expectation. I am super relaxed because it will be a wonderful talk with the former president of the Nation, an engineer Mauricio Macri. We are not going to avoid any question ”. And then he did come to the table to eat heads-up with his only guest of the night.

After exchanging thanks, before receiving the starter, and already seated, Juana told what it meant for her to have the former president sitting on her right: “It is a pleasure for me. I am a little nervous. It is not easy to interview a former president ”. With a burrata served, the driver began by asking the president for Primer Tiempo, the book that Macri published in March. Then, resorting to metaphors, Juana asked the former president if in a second half he thought he would be a player or a technical director.

He also asked him when he had last spoken to the president, if he thought Alberto Fernández or Cristina Kirchner was in charge. And without hesitation he marked: “You said you were going to be the last Argentine to get vaccinated …”, in relation to the former president’s words who, finally, while traveling through Miami, got vaccinated. Then the former president alleged that he found out that they were inoculating near where he had gone to give a conference and despite the fact that in Argentina it would be his turn in the next few days because he is more than sixty years old, he wanted to do it so as not to get a vaccine from another Argentine. For Juana to be honest and clarify that she was not against people getting vaccinated abroad.

Without hesitating and making clear a certain familiarity with the former president, whom she has known for years from the summers shared in Punta del Este and from the bond that Macri has with her grandmother, Juana inquired: “Why do you think you were not reelected? ” And he also wanted to know: “Do you want to be president again?” Always to get clear statements from the former president, who said he wants to “develop the leaders we have.”

While when Juana marked her that only one of the candidates in her space will win and named leaders such as Maria Eugenia Vidal Y Horacio Rodríguez LarretaMacri –who has already ruled our country– confirmed: “All priests want to be popes. I am here to help you ”. In addition, the driver wanted to know who was in charge of that set up, confusing the term “rampant voice” to mean “rampant voice”. And he said it twice. Doubts were also raised about the engineer’s link with Marcos Peña, his former chief of staff, and with the Ecuadorian Jamie Duran Barba, his main press adviser.

Exercising listening and with patience, Juana also wanted to know from Macri’s experience when he was kidnapped thirty years ago. He asked him about the box where he was held captive, about the friendly bond he established with one of his kidnappers, and she followed attentively the shocking story of the former president. “How was your bond with your dad?” The actress inquired and the former president spoke of the competition between the two and the end that found them having healed wounds.

While –with the mushroom risotto on the table– when Juana pointed out that only one of the candidates in her space will win and named her leaders as a great cook ”, she assured Juana in relation to Awada, the former president’s wife, showing off how much he knows the Macri. Then, given the lack of skill of the engineer, he joked with what little he knew about gastronomy, suggested that he dedicate himself to something else and said: “Cooking is not your thing.” The toast? For values ​​shared by both: “for independence and freedom.”

Betina O’Connell recalled her participation in “Suave”, Luis Miguel’s video clip: “After the recording, he invited us to his house in Acapulco”
Eva de Dominici surprised her followers with a shocking makeover
Paola Krum spoke for the first time about her relationship with Iván Espeche: “She said that I was not going to fall in love with someone in the middle again, but it happened to me”