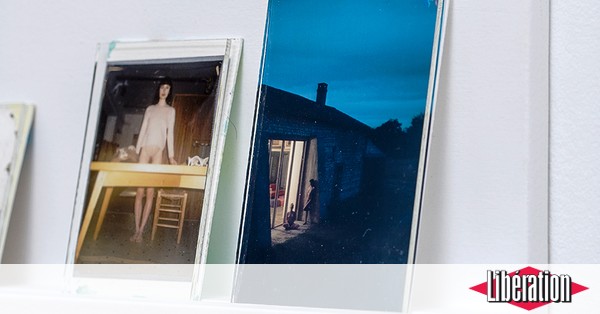 Julien Carreyn takes his photographs during his walks in Montmartre. He lives there. In these confined times, he could hardly venture beyond the mound. But the man has reservations: the photos from before. He archived them without classifying them, in boxes from which he now leaves them, noting the disorder, without claiming to be able to identify them exactly, nor to want to sort them. They all end up mingling. Both in her memories, vague, but also on the walls of the Crevecœur gallery which hosts her exhibition “Jeanne Cals and the pharmacies of the Sacred Heart”, in this disorder arranged with shelves with very domestic bills. The artist designates them as “Medicine cabinets”, but we also identify them as those modest shelves where trinkets, trinkets, postcards and other family photos neatly cluster in the kitchens of our grandparents. Or a model of attachment that cannot be overcome in its memorial virtues. Julien Carreyn’s exhibition here succeeds in challenging the conditions of visibility of an image in a gallery, these commercial spaces supposed to let the work of art shine, but which usually impose their law, their light, their surface, their aim (the sale). So it will not be on these walls that you will see his photos, but on this kitchen or bathroom display. As if you were there.

There remains the question of content. Hardly visible, reduced to Polaroid format, the images capture deserted urban landscapes as well as naked girls, alone or in groups, seen from too far away for their bodies to really take shape. Julien Carreyn plays with vagueness and stays at a distance from the subjects as much as from the viewer. As he does with his own photos and with the real that they capture but that he claims to evaporate. Between them, on his pharmaceutical shelves, he therefore interspersed tiny paintings, with abstract, volatile, mute, atmospheric patterns that parody, in his eyes, the front of playing cards and then the indescribable shapes traced by these artists whose strokes brushes delight him, starting with Matisse and ending with Raoul De Keyser, whom few people know. Whatever. These paintings of little, parody, only claim to make the link between the photos and therefore bend to their format, even their palette. Such a portrait, haloed with a green glow, will thus be enhanced, on the same shelf, with a miniature painting surrounded by a blur of the same tone. Which is most often adorned with a summer touch, the artist having anticipated, when he was preparing this winter exhibition, an overcast and grayish weather, between the livid walls of the gallery.

See Also:  Siblings in the delivery room: Birth as a family event?

Julien carreyn Jeanne Cals and the pharmacies of the Sacré-Cœur Galerie Crevecœur, 75020. Until January 23.