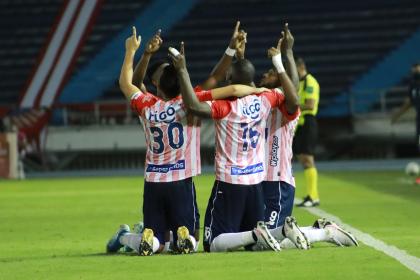 In a vibrant match, Junior defeated América de Cali 2-1 this Saturday at the Estadio Metropolitano for the third date and confirmed their leadership in the BetPlay I-2021 League with perfect scores.

Miguel Borja’s scoring and goalkeeper Sebastián Viera’s free-kick that determined the Atletico victory gave the greatest joy to coach Amaranto Perea, who was just celebrating his 42nd birthday. Meanwhile, the ‘devils’ – in the absence of the postponed game with Patriotas – they were left with just 1 point in box 14 of the contest.

The Valle del Cauca team came out to pressure the ‘shark’ and drowned it for a good part of the first period, generating two arrivals at the portico. Santiago Moreno had the initial at 4 minutes, but finished off left-handed without power, at the hands of Sebastián Viera. Later, Luis Sánchez tested the Uruguayan’s reflexes at 13 with a right hand.

Unfortunately, at the time when the reds were working better on the field, central Kevin Andrade committed a reprehensible foul, a stomp on ‘Teo’ Gutiérrez without any need, and was sent off after 18 minutes, after the Antioquia referee Jorge Tabares reviewed the VAR.

That forced Juan Cruz Real to modify his script, lowering Daniel Quiñones as left back and Pablo Ortiz to their natural position as a defender, as well as Luis Sánchez a few meters behind to establish a clear 4-2-2-1.

The player did not feel the visitor, who until that moment controlled the ball in the middle, without allowing Junior to be useful to disturb the red defense. Hinestroza, Pajoy, Teófilo and Borja were stone guests before the good actions of the two-time Colombian champion, although later they were more protagonists in the generation of ideas.

Danny Rosero swept over Moreno committing a foul before entering the area, but the judge did not give it, causing the scarlet coach’s claim.

A shot from Juan David Rodríguez on Rafael Carrascal made Tabares show the second red of the match at 28 PT at the junior midfielder, leaving both with 10 men.

The host’s first approach came at minute 37, when ‘Teo’ Gutiérrez crossed and Miguel Borja finished off, but Joel Graterol took the ball over the horizontal.

Hinestroza won the last line in a fast counterattack, he centered Borja, but the striker ‘shark’ wasted against Graterol in the clearest of the ‘ñero’ box on 46.

Junior got up on the scoreboard at 3 minutes after the complement after a cross from Viáfara, which left Quiñones behind, put the warm center and Borja beat Jerson Malagón and Cristian Arrieta with a header to beat Graterol.

Adrián Ramos entered at 10 minutes for the Peruvian Aldaír Rodríguez, who has not yet confirmed the reason for his coming to Colombia. In an action at 13, he left the ball to Luis Sánchez, who finished off deflected before Viera in the deepest presence of the outsider box.

Pablo Ortiz got up on a forehead, but deflected the ball at 27. The back entrance of Émerson Batalla was not important either against a Junior who despite having so much attacking player was not forceful.

Didier Moreno lost a ball with Santiago Moreno outside the area, the winger made the wall with ‘Adriancho’ and with a left foot adjusted to Viera’s hand, he got the tie at 33, a result just because of the improvement that the scarlet cast had had in the second half with the income of Ramos and Émerson Batalla.

A foul by Pablo Ortiz in the 41st minute on the edge of the area generated a free kick that Sebastian Viera charged like the gods to the upper right corner of Graterol’s goal and declared it 2-1. Great goal that unraveled a game that was complicating Junior.

At about 45, a counterattack by the local led to a non-existent foul by Giraldo on Fuentes, the referee Tabares gave a penalty, but they called him to watch the VAR, withdrawing his decision. He won the ‘shark’ set and looks at the others from the top with 9 points.

On the fourth date of the League, América will host Bucaramanga on Wednesday, February 3 (8:10 pm), while Junior will visit Equidad that same day (2:00 pm).