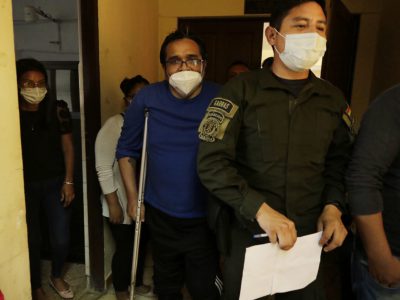 Colonel Anibal Rivas Guzmán is investigated for a video in which he is seen with the ex-civic Luis Fernando Camacho in November 2020, during the conflicts that led to the resignation of Evo Morales. Camacho said that the police or military who were part of the protests will not be left alone

The ex-civic and candidate for governor of the department of Santa Cruz Luis Fernando Camacho was summoned this Thursday to testify in an internal police investigation against Colonel Anibal Rivas Guzmán for the mutiny and mobilizations of November 2019.

He is summoned as a witness for 3:00 pm this Friday in the premises of the Departmental Directorate of Internal Police Investigation in Santa Cruz.

“We are not going to leave our people alone, neither the police nor the military who were part of this peaceful, democratic and constitutional mobilization,” said Camacho, referring to the protests in October and November.

Shortly after the resignation of Evo Morales Camacho revealed in a video broadcast on social networks that his father made contacts and agreements with the police and the military so that they do not come out in defense of the former president’s government, in the midst of the political-social conflict demanding his resignation.

Rivas was one of the first uniformed men who aligned himself with the protests made by civic groups demanding the resignation of Morales. In Tarija, as commander of the State Private Physical Security Battalion, he harangued “Who surrenders, who gets tired?”, A refrain that identified the civic movement

See Also:  Bafin does not see mergers as a panacea for German banks

“We want to ask (the Government) to stop outraging our institution, all the years that it has governed it has had the Police as well as its training, including usurping purely police functions,” he said, according to a November 9 statement published in the digital newspaper La Voz de Tarija.

The colonel is accused of misdemeanors such as “ordering or inducing the execution of acts that constitute misconduct, for personal benefit or that of third parties” and “instigating or leading riots, strikes, suspension or interruption of service, such as acts of protests or pressure measures” , according to Law 101 of Disciplinary Regime.

Camacho detailed that he was summoned to authenticate a video in which he is seen with Colonel Rivas on September 22, 2020.

“It was in a caravan, I met him and greeted him; now they are citing him because what they are looking for is to intimidate those who were in the deed, “he questioned.

The Deputy Minister of Decolonization, Pelagio Condori, filed a complaint with the Police against the uniformed men identified in videos cutting or removing the Wiphala from their uniforms or justifying their participation in the November 2019 protests.

Of the 26 police officers reported for offending the Wiphala and participating in the protests that led to Morales’ resignation, there are a general, eight colonels, four lieutenant colonels, four majors, three captains, a second lieutenant, three non-commissioned officers, a sergeant and a Corporal of the Bolivian Police.

A prolonged civic strike, complaints of electoral fraud, a police riot and the military “suggestion” of resignation forced Morales to leave office.