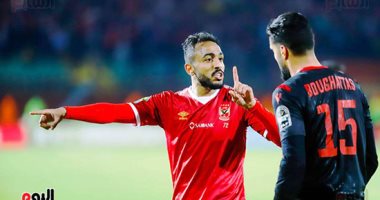 Mahmoud Abdel Moneim Kahraba, Al-Ahly player, expressed his happiness at his return to his club recently, commenting: “I am happy and happy to take home again, even if Heil Heil Kor is with the team … I went back to commitment as soon as I joined Al-Ahly, I play, I play, and when I keep, I sit on the bench with a seat.”

Kahraba said in statements during the official Ramez Majnoon program: “I have no problem sitting on the bench, I wanted to return to my family in any way and it was my dream for a long time, especially since it is the club that I was brought up in as a child.

On his argument with Tariq Hamid in the local super match, Kahraba revealed that the Zamalek player was the one who first insulted him in the match after his descent and confirmed that he had not insulted him, commenting: “Tariq Hamid interfered with me violently, so I said to him comfortably, so he did a captivity“.

Tariq Hamed quarreled with Kahraba in the last Super Cup match that was held in the Emirates, which Zamalek won the title after a penalty shootout after the match ended in a negative tie between the two teams.