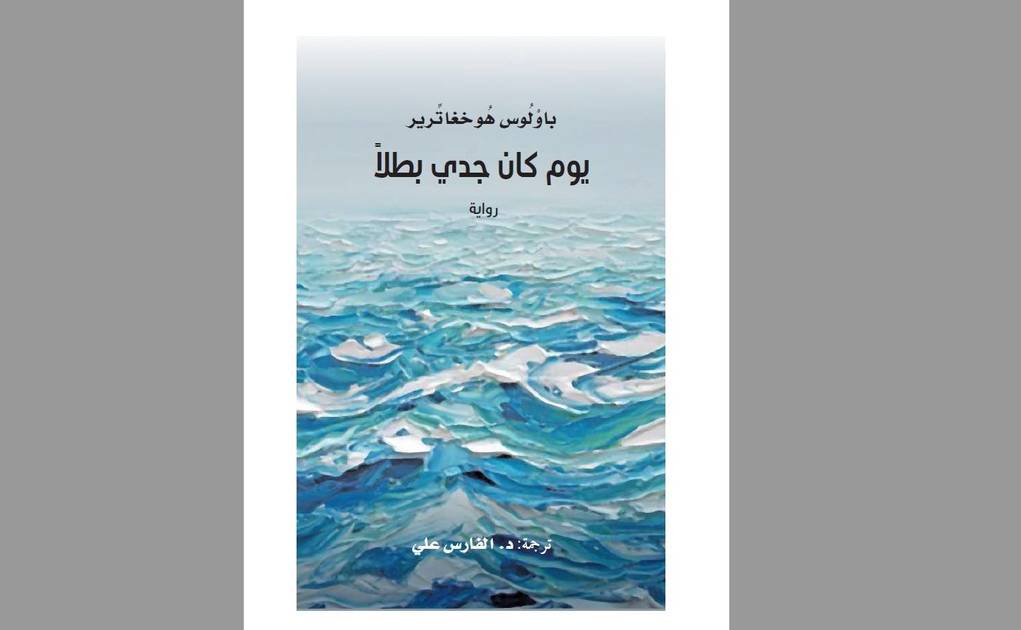 Abu Dhabi: «The Gulf»
The “Kalima” translation project at the Abu Dhabi Center for the Arabic Language of the Department of Culture and Tourism – Abu Dhabi has issued a translation of the novel “The Day My Grandfather Was a Hero”, by Paulus Hochgatterer, and it was translated into Arabic by Dr. Al Faris Ali, and reviewed by Mustafa Al-Sulaiman.
The novel takes place at the end of World War II, in an Austrian farm; Where the family of Jacob Leitner takes care of the stricken thirteen-year-old girl Cornelia Dinehart, who suffers from a nervous shock, which has left her memory, after one of the Allied air raids on her hometown of Saint Valentine in October 1944, which hit her home, and lost her family.
The author, a child psychologist, conveys the atmosphere of war through the eyes of Cornelia, whom her new family calls Nelly. She used to write down the details of life on this farm in her brown notebook, whether her relationships with members of the family consisting of the farmer Jacob, his wife Barbara, his five daughters, and his older brother Lorenz, or other families and neighboring personalities, and to monitor with her pen the features of these characters with great accuracy, and review their relationships Swinging with the farm girls, especially the girl Antonia, with whom her relationship was marked by jealousy, suspicion, anger, and hatred, as opposed to her relationship with Annemarie, which was characterized by warmth and affection mixed with hump. Five months later, a group of townspeople come to the farm to take cover from the non-stop air raids, and with them is a young Russian man who escaped from the captivity of German forces, in possession of a painting with strange geometric shapes, which he claims is his. The girl Nelly pays special attention to him, and a delicate relationship develops between them, and at the same time she watches his relationship with the girl Antonia.
A short, eloquently woven novel that sees many forms of death and life in its mirror. The absurd death in “yellow time,” as one of the farm girls put it. Moreover, it is a novel that contains a lot of life that appears to you in different pairs, sometimes in one moment; Love and jealousy, passion and anger, contentment and indignation, contentment and gluttony, disappointment and hope, sympathy and prejudice, facts and myths. With the last line of this novel, the reader discovers that it was in the presence of a distinguished work that should be included among the masterpieces of world literature, even German… a work that allows, with many other interpretations, perhaps the number of its readers.
Paulus Hochgätter; He is a writer, and a specialist in child psychology. He is the recipient of many awards and certificates of appreciation, most recently the Austrian Art Certificate in 2010. He has published several works, the most famous of which are: “A Talk on Surgery” (2005), “Nesten’s Base” (1995), “The Story of Wild Water” (1997), and “Carita Carita” (1999), “A Talk about Crows” (2002), “The Sweetness of the World” (2006), and “The House of Mattresses” (2010).
Knight Ali; He is an academic and translator, graduated from Cairo University, from which he obtained a master’s degree in comparative linguistic studies in 1995, then a doctorate from the Free University of Berlin in 2006 in Semitic and comparative linguistic studies. He is an assistant professor at Cairo University and Zayed University. The translator has a number of refereed publications and articles in his field of specialization and translations from German, most notably “The False Madeleine” for the “Kalima” project in 2017. He won the Cairo University Prize in Scientific Publishing.