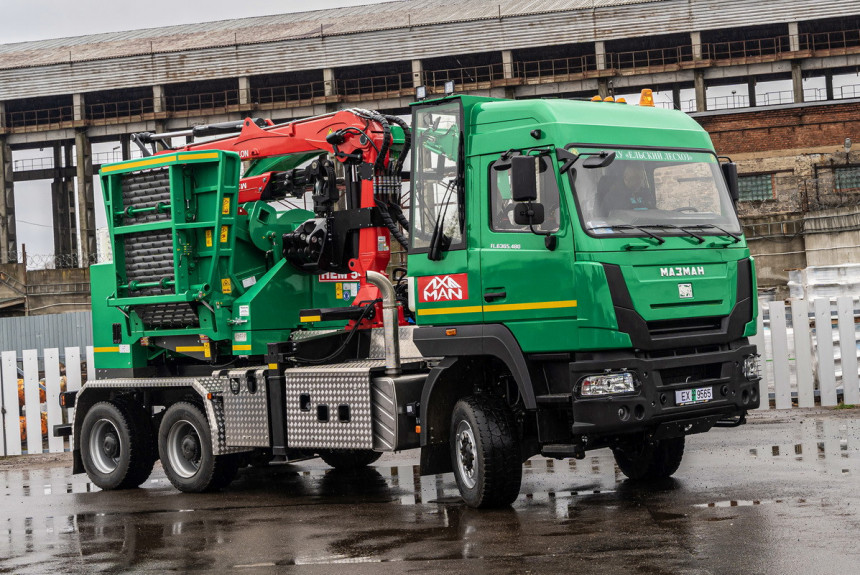 Belorussian MAZ-MAN expands the program. The main part of its production falls on all-wheel drive tractors and dump trucks for oil workers. However, Minsk understands that such a one-sided program is risky. For example, Minskers recently showed a novelty – a tank for transporting milk, the first of the ordered batch.

The 6×2 chassis is traditionally based on German units: 440 hp MAN diesel engine, gearbox – 16-speed manual ZF. The Polish tank car with a volume of 14,000 liters made of AISI 304 acid-resistant stainless steel is thermally insulated and provides heat transfer of no more than 4 ° C in 24 hours.

And recently, a chipper was assembled there – a machine for crushing branches and branches on a 6×6 all-wheel drive chassis. Her engine is more powerful, 480-horsepower, the gearbox and transfer case are also ZF. As is customary for such machines, an additional window is installed in the rear of the cab to monitor the operation of the installation. Superstructure – well-known brand Jenz with a rotor diameter of 820 mm. The maximum diameter of processed wood is 560 mm for softwoods and 420mm for hardwoods.

It is clear that under the sanctions, the stock of German units will soon run out. But, according to the manufacturer, alternatives to all the main units have already been selected – however, which ones have not yet been disclosed.

KAMAZ showed two firemenis car new generation – tank truck ATs-4.0-50/4 and ladder truck AL-42. The most surprising thing about them was the use of the chassis of the K5 generation, with a narrow and short “tipper” cab. Both vehicles are built on the basis of a two-axle chassis KAMAZ-63934. They are equipped with a 310 hp in-line six-cylinder diesel engine, an automated nine-speed gearbox and a 13-ton drive axle. The superstructure of the tank truck was made by Prioritet from glued aluminum. Tank volume – 4000 l, foam tank – 240 l; mixture feed rate — 50 l/s.

However, as in the previous case, it is unclear what will happen to the main units of the K5 generation in the near future. Probably, the development of fires was completed even before the change in the situation.

It is gratifying that the production of domestic trolleybuses is maintained, although not in the same volumes. latest news Ufa tram and trolleybus plant – their latest UTTZ-6241.01 Citizen arrived for testing in Stavropol. A 90-seat autonomous trolleybus (up to 25 km with all consumers) has already been tested in Novosibirsk, Yekaterinburg and Penza. Moreover, the car is already serial, nineteen units have been serving the routes of Novokuznetsk since the winter.

Spain’s Valladolid to receive 30 Irizar iE articulated electric buses over the next two years. It is noteworthy that the 18-meter futuristic-looking car can accommodate only 105 passengers, including 43 seated. The passenger capacity of a similar GAZ electric bus reaches 140 people, and the Minsk BKM Vitovt is 153 at all.

The Spanish electric bus is equipped with 630 kWh batteries and a dual charging system consisting of a pantograph on the roof and smart charging in the park. Charging time using the Combo 2 connector is about three hours. The price of the electric bus is not called.

50 cases in one day in Aargau