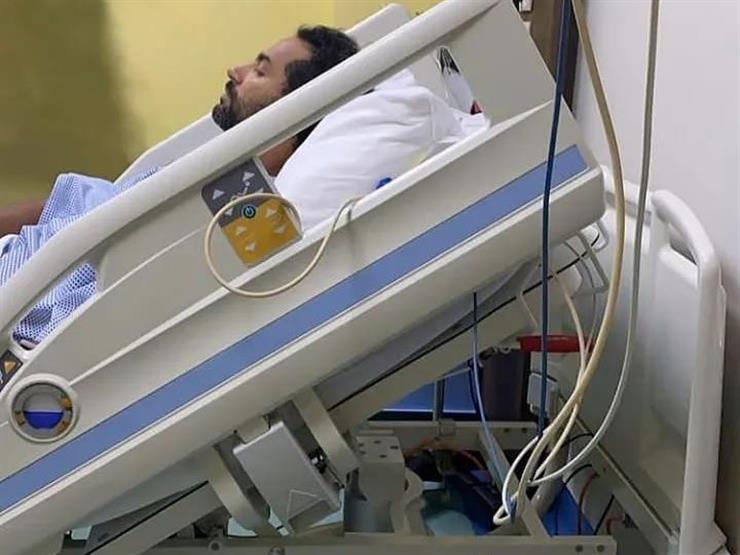 A state of anxiety prevailed in the pages of the stars of the artistic community after they circulated a picture of the artist Karim Fahmy, lying on a hospital bed, wishing him a speedy recovery after suffering two lung clots.

And the artist’s wife, Karim Fahmy, published, through his official account on the Instagram website, a picture of him while he was in the hospital, where he lay in intensive care, and asked his followers to pray for him and wrote: “Your prayers for Karim after he suffered two strokes on the lung … God willing, you will transgress well, and you will be safe, Lord.”
Karim Fahmy was previously infected with the Corona virus, but he recovered from it, and announced in late December that he was in good health after suffering from the virus, and in the past days he appeared in good health as he was in the Emirates, after obtaining the golden residency, according to what was announced on his account. The official Instagram website.
After the injury suffered by the artist Karim Fahmy, “Masrawy” reviews the causes of the “lung stroke”, according to healthline.

How does a lung clot occur?

It affects a person when a blood clot occurs in a particular artery in the lung, and these blood clots usually come from the deep leg veins in the leg, and this condition is known as deep vein thrombosis.
The clots don’t have to happen all at once, but parts of the lung get damaged with each blockage in the artery, making it more difficult for the lung to supply oxygen to the rest of the body.

When do you infect a person?

Most often, blood clots come in the lung during periods of inactivity, such as:

Long rest on the bed
If you are confined to bed for an extended period after surgery, such as: a heart attack, a broken leg, trauma, or any serious illness that may make a person more susceptible to blood clots.
In a sleeping position, the lower limbs are horizontal for long periods, which leads to a slow venous blood flow, and thus blood collects in the legs, causing some clots, including a lung clot.
long trips
Sitting in a cramped position while traveling by plane or car, slows blood flow in the legs, thus contributing to clots.

What are the factors that increase the risk of lung thrombosis?

1- Cardiovascular disease: specifically heart failure, as this increases the possibility of a stroke in the lung.
2- Having some types of cancer, including: pancreatic, ovarian, and lung cancers, all of which can increase the risk of developing blood clots.
3- Smoking: It prepares for a blood clot in the lungs, especially when combined with other risk factors.
4- Weight gain: especially in women who smoke or have high blood pressure.

Symptoms can vary depending on the size of the clot, and whether the person has lung or heart disease. Common signs and symptoms include:
Shortness of breath: This symptom usually appears suddenly and gets worse.
Chest pain: It feels like a heart attack, and the pain may get worse when you breathe deeply or when you cough and stand down.
Persistent cough: often mucus mixed with blood comes out.

There can also be other symptoms affecting other parts of the body, including:

Leg pain or swelling.
Skin color changed to blue.
Excessive sweating.
fast or irregular heartbeats;
lightheadedness or dizziness;
Tips to avoid a lung clot
There are a set of tips to avoid a pulmonary embolism, and they are as follows:

Take the anticoagulant prescribed by your doctor.
Wear compression stockings if recommended by your doctor. These fit tightly around the bottom of your legs and encourage blood to flow more quickly around your body.
Maintaining human activity.
If you have surgery, move or do leg exercises as soon as possible.
On long trips, do leg stretches: bend and straighten your legs, feet and toes every 30 minutes when you are seated. Stand and walk around when you can. Do some deep breathing. It helps if you drink water regularly.

Wear airline socks, and if you are at risk of developing blood clots, check with your doctor before traveling long distances.
Change your habits We can all reduce our risk of developing a stroke by changing our habits. For example: not smoking, exercising regularly – at least 150 minutes per week.
Not sitting still for a long time – such as when we watch TV or use the computer, take an active break every 30 minutes or so.

Eat a healthy balanced diet, with plenty of fruits and vegetables.
Maintain a healthy weight.
Stopping smoking is especially important in preventing a possible lung thrombosis, as well as keeping you away from grief.