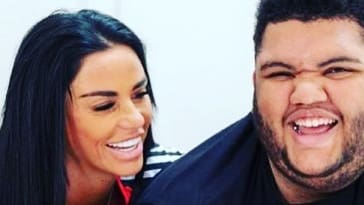 For Katie Price (42) it was probably one of the hardest decisions of her life. The British model decided to send her son Harvey, 18, to a nursing home. The mammoth task of looking after her severely disabled son was no longer up to the mother of five.

Last summer, she also said in an interview that she hoped that she survived her son. In the BBC podcast “Ouch” she explains again why she made this heartbreaking statement – even though she loves her son more than anything.

Katie Price is physically inferior to her son Harvey

She also tells of a dramatic incident that she experienced with her son. Harvey didn’t want their family vacation to end and refused to get off the plane. Price couldn’t do anything. Her son weighs 185 kilograms and is physically far superior to his mother. “He just didn’t understand why he should get out.” The reality TV personality didn’t know what to do other than to contact the police.

She tried to explain to officers that Harvey was autistic. In the end, he had to be taken off the plane by the armed police. Harvey then freaked out at the airport and did not want to be reassured. “He tried to knock the phones off the walls at the gate.”

Even when he should go to school, Harvey often fought back with all his might. He broke windows so his driver wouldn’t take him to school. “This fears that Harvey will break his windshield or attack him,” said Price in an interview with “Women’s Hour”.

Katie Price has now given her son to a nursing home, where he receives professional support. Harvey has been autistic and visually impaired since birth. He also suffers from a genetic disease, Prader-Willi syndrome. Those affected are mentally underdeveloped and muscular. When they are young, they develop an insatiable hunger that leads to obesity. Harvey is also very overweight.

Price insists she couldn’t give Harvey what he needed anymore. But she still has a hard time deciding to give it away.

But Harvey already has big plans for the future. In a BBC documentary, he and his mother visit a train station. There Harvey is enthusiastic about the trains – and shows his skills directly and makes a train announcement.

Fans were so touched by the scene that they tweeted about it and made “Network Rail” aware of it. And they immediately offered Harvey to record some train announcements. (paf)