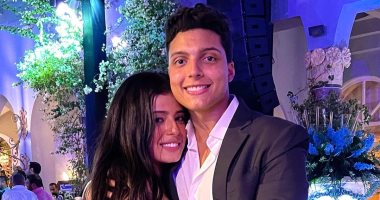 Khaled Amer Mounib, son of the late great artist Amer Mounib, was keen to send a message to his sister Maryam, who celebrated her engagement yesterday, amid a large number of family and friends in a huge party filled with fireworks and lights, and published a photo of their gathering through his personal account on the “Instagram” website.

The son of the late great star Amer Munib said in his message to his sister: “The sweetest Mariam, a thousand thousand thousand congratulations, my love, for your engagement to you and Amr. And Noor Habibi, it was the best day.

Ten years after his departure, joy entered the home of the late artist Amer Mounib, and his daughter, artist Maryam, celebrated her engagement in the presence of a family and artist in El Gouna.

Maryam’s engagement attracted the attention of the art audience on social media platforms, and a group of artists appeared at the ceremony, most notably the artist Sherine Reda.


Khaled Amer Munib and his sister

Weeks ago, specifically on September 2, Maryam celebrated her late father’s birthday, and published a picture of him holding her as a little girl and commented: “58 candles today… Please take a moment to wish this angel the happiest birthday.”

And Mary, who re-presented her father’s song “A Factor in Your Life” on the eighth anniversary of his death, said to him on his birthday this year: I made my life like a fairy tale with the happiest of endings. He did nothing but make everyone around him smile.