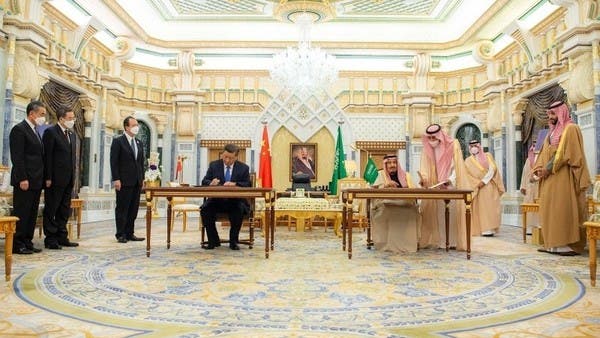 Custodian of the Two Holy Mosques King Salman bin Abdulaziz and Chinese President Xi Jinping signed today, Thursday, the comprehensive strategic partnership agreement between the two countries during a visit by the Chinese president to the Kingdom.

Conclusion of agreements and memorandums of understanding

And the Saudi Press Agency reported that the Crown Prince held an official session of talks with the President of China, during which they reviewed aspects of partnership between the Kingdom of Saudi Arabia and the People’s Republic of China, joint coordination efforts to enhance cooperation between the two countries in various fields in line with their vision, and discussed opportunities to invest available resources in both countries. the two countries in order to achieve common interests, in addition to discussing regional and international developments and issues of common interest and the efforts exerted in this regard.

King Salman and the Chinese President

After that, the Crown Prince and the President of the People’s Republic of China witnessed the exchange of a number of bilateral agreements and memorandums of understanding between the two countries, as follows:

First: Harmonization plan between the Kingdom’s Vision 2030 and the Chinese Belt and Road Initiative.

Memorandum of Understanding in the field of hydrogen energy

Second: a memorandum of understanding in the field of hydrogen energy and its exchange from the Saudi side, Prince Abdulaziz bin Salman bin Abdulaziz, Minister of Energy, and from the Chinese side, Chairman of the State Development and Reform Commission He Lifeng.

King Salman and the Chinese President

Third: An agreement between the Kingdom of Saudi Arabia and the People’s Republic of China for cooperation and judicial assistance in civil, commercial and personal status matters. They were exchanged from the Saudi side by Minister of Justice Dr. Walid bin Muhammad Al-Samaani, and from the Chinese side, State Counselor and Foreign Minister Wang Yi.

Fourth: a memorandum of cooperation to teach the Chinese language. It was exchanged from the Saudi side by Minister of Education Youssef bin Abdullah Al-Bunyan, and from the Chinese side, State Adviser and Foreign Minister Wang Yi.

Sixth: An action plan to activate the provisions of the Memorandum of Cooperation in the field of housing. They were exchanged from the Saudi side by Minister of Municipal and Rural Affairs and Housing Majid bin Abdullah Al-Hogail, and from the Chinese side by Minister of Commerce Wang Wentao.

After that, a ceremony was held to award the Chinese President an honorary doctorate in administration from King Saud University.

During the visit of the Chinese president, three summits (Saudi Arabia, Chinese Gulf, and Chinese Arab) will be held in the presence of more than 30 leaders of countries and international organizations, which reflects the importance of holding these summits, and the regional and international attention they enjoy.

‘No longer will babies be born in labs, not at home; Childbirth will be under human control’ | Baba Vanga Future Predictions | 2023 | Delivery