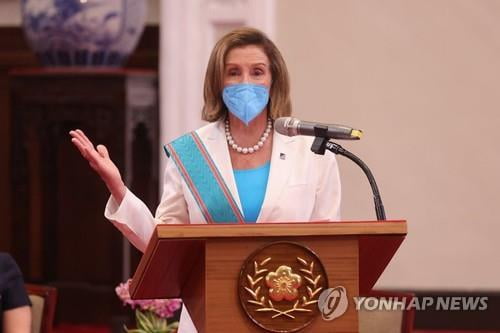 Tensions between the U.S. and China continue to escalate after House Speaker Nancy Pelosi, the third-ranked American in power, visited Taiwan.

Although Chairman Pelosi left Taiwan after completing a two-day schedule, China is not hiding its furious feelings, such as raising the level of armed protests against Taiwan and retaliating.

The United States criticized China for intentionally raising military tensions using this incident as an excuse, saying that the ‘one China’ policy remains unchanged despite Pelosi’s visit to Taiwan.

The long-standing conflict between the U.S. and China, which started in a struggle for hegemony, has rapidly spread to a precarious confrontation over potential regional security, raising a warning tone for world peace and security along with Russia’s invasion of Ukraine, which brought about a second Cold War.

China, which warned of the consequences of Pelosi’s visit to Taiwan, immediately entered into high-intensity armed protests.

Although ostensibly directed towards Taiwan, there is no theory that it is essentially aimed at the United States.

China announced that it will start a large-scale military exercise around Taiwan from the night of the 2nd, followed by live-fire training in six zones set around Taiwan for three days from 12 noon on the 4th.

There is also an analysis that it is actually implementing a Taiwan unification military operation scenario.

On the 3rd, when Chairman Pelosi was staying in Taiwan, 27 military aircraft, including J-11 fighters, crossed the midline of the Taiwan Strait and entered the Taiwan Air Defense Identification Zone (ADIZ) to press Taiwan.

The middle line of the Taiwan Strait is a boundary line declared unilaterally by US Air Force General Benjamin Davis in 1955 to prevent a military clash between the People’s Republic of China and Taiwan.

If a Chinese fighter crosses this line, it can reach Taiwan in a matter of minutes.

Taiwan’s defense ministry has strongly condemned China’s armed protests, calling it a “violation of sovereignty and violation of international law.”

China did not stop at armed protests, but also took economic retaliatory measures.

China’s Ministry of Commerce announced on the 3rd that it would temporarily suspend the export of natural sand used for building materials to Taiwan from the 3rd, and the customs authority, the General Office of Customs, also announced on the same day that it would temporarily suspend the import of Taiwanese citrus fruit, chilled cutlassfish, and frozen horse mackerel.

Chinese Foreign Ministry spokeswoman Hua Chunying said on the 3rd that “the independence and division forces of the United States and Taiwan must be held accountable for their mistakes and pay the price.”

Earlier, the Chinese Foreign Ministry summoned US Ambassador to China Nicholas Burns late at night on the day Pelosi arrived and delivered a strong protest.

The White House of the United States, which has expressed respect for Pelosi’s intention to visit Taiwan, has begun to prepare countermeasures for the ‘aftermath of Pelosi’, such as stating that it does not want to escalate the crisis.

U.S. President Joe Biden held a meeting with the National Security Team on the morning of the 3rd to discuss follow-up countermeasures despite being quarantined due to a recurrence of the novel coronavirus infection (COVID-19).

“We discussed a number of priorities, including a free and open Indo-Pacific and our continued support of Ukraine,” Biden said in a tweet.

However, given the mention of continuous support for the Indo-Pacific region, to which Taiwan belongs, it is interpreted as showing a willingness to break through without being intimidated by the Chinese threat.

White House press secretary Karin Jean-Pierre also said at a briefing, “China has no reason to turn Pelosi’s visit to Taiwan into a crisis, which is consistent with long-standing US policy.” criticized that

However, he cautioned against worsening the situation, saying, “The United States neither seeks nor wants a crisis.”

In the midst of this controversy, Chairman Pelosi, who was in the middle of the controversy, left Taiwan and responded with a statement saying, “China can block Taiwan from participating in international conferences, but it cannot prevent world leaders and people from visiting Taiwan.” shortened it

In a joint statement, the foreign ministers of the seven major countries (G7) also condemned China’s aggressive military activities in the Taiwan Strait under the pretext of Pelosi’s visit as unjustifiable.

Chairman Pelosi, who arrived in South Korea on the night of the 3rd, is expected to visit the Joint Security Area (JSA) in Panmunjom to encourage the soldiers following a meeting with National Assembly Speaker Kim Jin-pyo on the 4th.

For the first time.. Universities Affairs announces new decisions, including allowing the student to obtain more than one bachelor’s degree