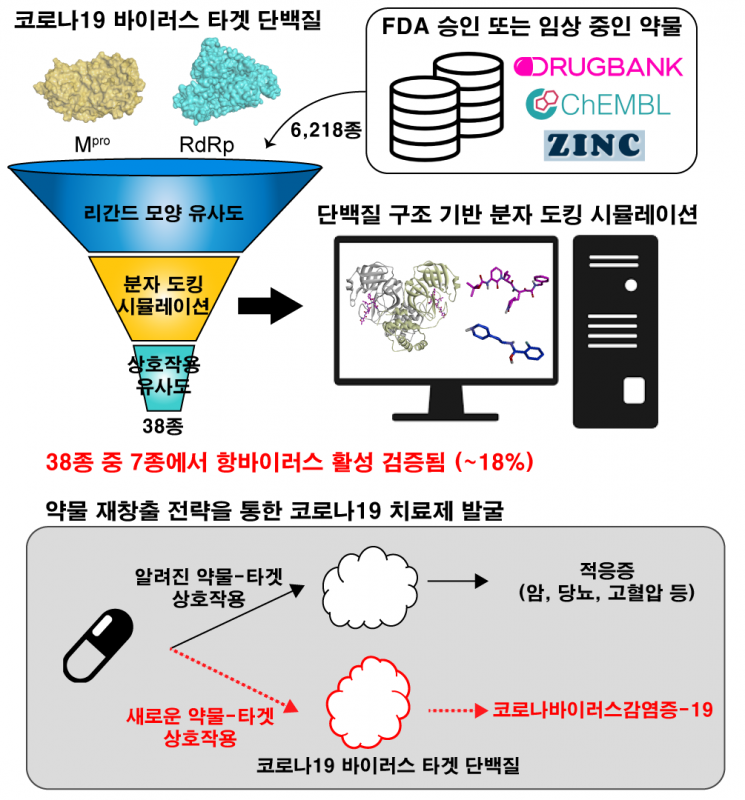 [아시아경제 김봉수 기자] A Korean research team has devised a new technique to quickly find substances that are effective against the COVID-19 virus among thousands of existing drugs. In particular, although toxicity was detected as a result of this result, it discovered a candidate for a treatment for COVID-19 that is 200 times more effective than the US remdesivir (becleri), drawing attention to future trends.

The Korea Advanced Institute of Science and Technology (KAIST) announced on the 8th that a joint research team led by Distinguished Professor Lee Sang-yeop of the Department of Biochemical Engineering and Dr.

Remdesivir was formally approved by the U.S. Food and Drug Administration (FDA) for the purpose of treating COVID-19, but it was evaluated that it did not reduce the mortality rate and only shortened the recovery period by about 5 days. As it is an intravenous drug, it has to be administered for several days through hospitalization at a medical institution, so it is also pointed out that the development of an oral treatment is urgently needed as it is not suitable for the pandemic situation.

Based on this, the research team conducted research on developing a treatment for COVID-19 as a drug re-creation strategy using virtual drug screening technology. Dr. Jang Woo-dae of the KAIST research team first built a virtual library of 6218 drugs by collecting FDA-approved drugs or drugs in clinical trials from the database. Because it takes a lot of time and money to verify all of these drugs in an experiment, we introduced a computer-based virtual screening technology that can quickly select only promising drugs as a virus treatment.

The existing docking simulation-based virtual screening technology had a very low hit rate of effective substance derivation due to a high false positive rate. Accordingly, the research team succeeded in increasing the accuracy of virtual screening by introducing the structural similarity analysis module and the interaction similarity analysis module before and after docking. The virtual screening technology developed through this research is characterized by being able to quickly and accurately screen various candidate drugs using protein-drug complex structure information.

The research team also developed an algorithm that automatically generates active structures of prodrugs based on nucleotide analogues, which are mainly used as antiviral drugs. Prodrugs have no medicinal effect by themselves, and must be converted into an active structure through body metabolism to show medicinal effect. Therefore, it is important to perform a docking simulation after structural transformation of the prodrug into the active form. The research team succeeded in automatically generating the active structures of several nucleic acid analogue-based prodrugs, including remdesivir, and was able to improve the accuracy of the docking simulation.

Through this, the research team discovered proteolytic enzymes (3CL hydrolase, Mpro) and RNA-dependent RNA polymerase (RdRp) that play an essential role in the replication and proliferation of SARS-CoV-2. Candidate compounds capable of inhibition were selected into 15 and 23 types, respectively.

Afterwards, the efficacy of 38 drugs selected through virtual screening was verified using a cell image-based antiviral activity analysis platform in the Biosafety Level 3 (BSL-3) laboratory of the Pasteur Korea Institute.

First, as a result of performing an in vitro experiment using monkey kidney cells (Vero cells) infected with SARS-Coronavirus-2, antiviral activity was confirmed in 7 of 38 drugs. Additional validation experiments were performed on human lung cells (Calu-3 cells) for these seven drugs.

However, the research team evaluated the efficacy of one of the candidate drugs through the Ministry of Science and ICT’s preclinical support project for corona treatment, and as a result, toxicity was found in animal experiments. Accordingly, the research team plans to conduct additional preclinical trials to find the optimal concentration of the drug that can reach the therapeutically effective concentration while minimizing the toxicity of the drug. Preclinical trials are also planned for the remaining candidate drugs.

Distinguished Professor Lee Sang-yeop of KAIST said, “This study is meaningful in that we have prepared a base technology that can quickly respond to the emergence of a new virus. We want to develop the technology we have.”

The results of this study were published online on the 7th in the Proceedings of the National Academy of Sciences (PNAS), an international academic journal.