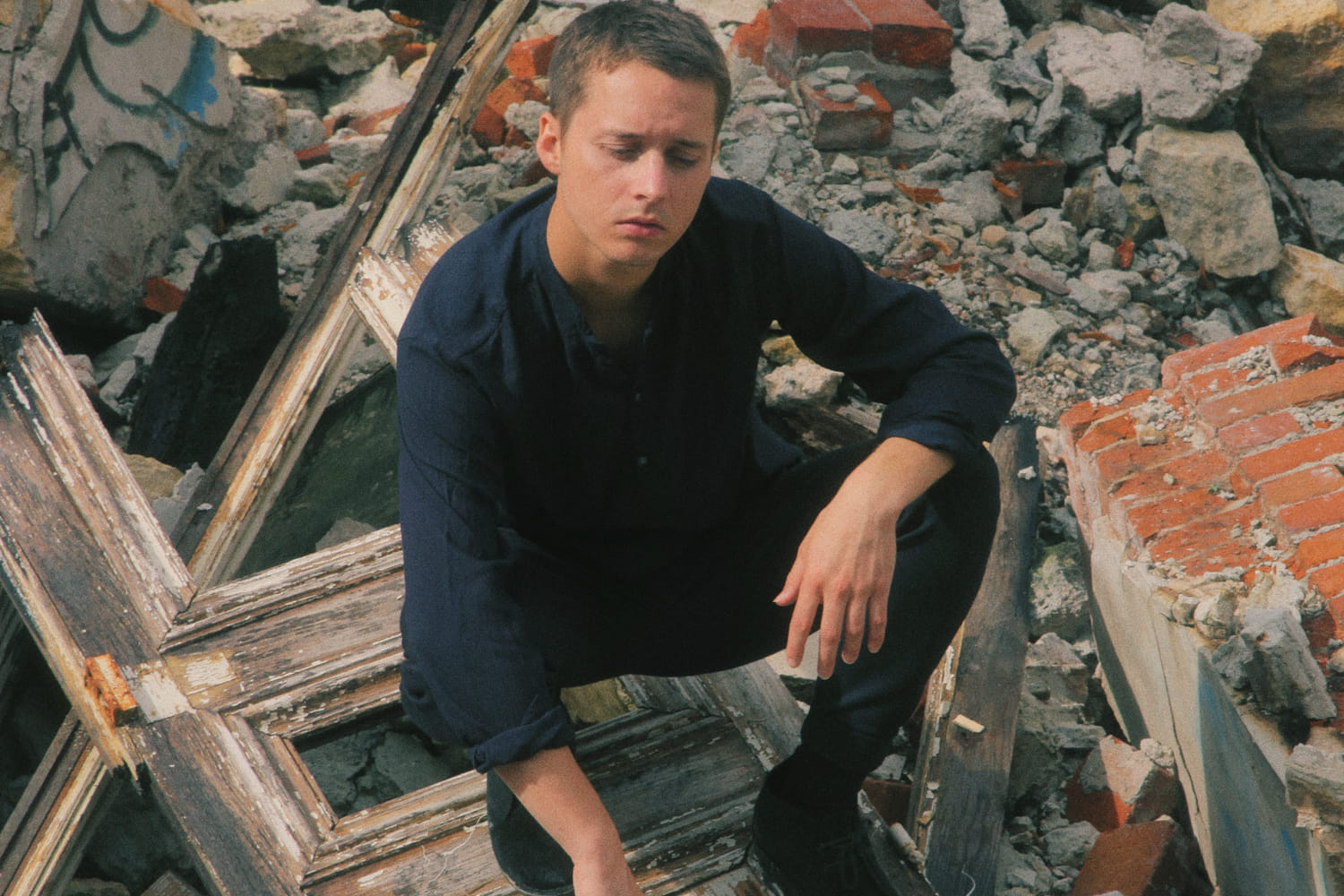 “Solar”. An adjective that would perfectly sum up Tim Dup’s third album, The mad rush, released this Friday, June 11, 2021. A new opus with Italian scents, bright and bewitching, one year after the release of his second album, What will be left of it?. “People are going to be able to listen to it and go on vacation with it, I’m too glad I fought so it could come out before the summer. I really wanted that. The records before were good to go. their place, an autumn record and a winter record. There, there is summer to listen to it! “, the 26-year-old singer confides to Linternaute.com. I have to say that The mad rush is cut out for the summer: twelve new solar tracks, which keep all the same the melancholy which makes the charm of the previous titles of Tim Dup.

“It speaks of love, but differently. I think the prisms are also shifting, it’s more carnal, I was less shy. The trip inspired me, the initial idea is movement , the lightness in its beautiful, serene, I wanted to make a serene record. Because I am and I feel good in my pumps. I think it’s a more peaceful record, more luminous also for that “, details Tim Dup, for whom this period of pandemic was paradoxically synonymous with” frustration, which gave rise to the desire for reunion, drunkenness … “.

So to draw this energy and this light, it is towards Italy that the interpreter of TER Center turned. “The image of Italy, it’s the kiff, it’s the summer, the sweet life… “. Three songs by The mad rush speak moreover of the peninsula, synonymous for the artist of “melancholy of childhood memories, a cinematographic melancholy that I find chic and there are I believe what are all the inspirations of this disc: the impressions, the perfumes , the colors, the sounds of summer… drunkenness and gluttony. Italy, that’s it: it’s wine, it’s too good food. “

And if the elapsed time between What will be left of it? and The mad rush is relatively short, it is the Covid-19 pandemic that pushed Tim Dup towards a third opus. “I had planned instead to defend my second album and to tour for two years. And in fact, in the constraint and the frustration, in the stillness, I was inspired. I had a little click where I was. I said, ‘go on, do yourself a little violence and go after a third album. The pressure, limit I put it on myself and I fought. “

It is more confident that the young artist unveils this third disc. “I love it and I don’t feel like a thief. Obviously, you feel like you have something to prove, but now, less. But it’s a battle every time, but at the same time, I believe that the artistic sincerity , it also feels when you listen to a record. It is true that it went quickly, but it took a confinement for this third album to arrive, clearly I did not think at all to do it so quickly “, underlines Tim Dup.

Paradoxically, despite the period, the album The mad rush is indeed the brightest of Tim Dup’s three records. “Lightness, it comes from letting go, both due to lacks, to be alone for a year, it makes you want to make music with other people. This desire for adventure in several, it came from there. Hence the collaborations “, underlines the artist.” On La course folle, there are indeed five duets: with Anaïs Demoustier, Alexandre Tharaud, Aurélie Saada, Thomas Enhco and Saane. A first.

“It was made of meetings, it was not at all prepared or arranged duets (…) It’s really a fun record. I think it comes from there this more solar side. not to say that he is less serious, there is always melancholy. But there is no ‘I did it quickly so I did it less well’ “, comments the singer from Rambouillet, who released, before The mad rush, three singles: Just to please you, Open air and Montecalvario.

If the song seemed to be about love and fiery declaration, Tim Dup’s music video for Just to please you totally takes the opposite direction. We discover Stéphane, witness of love for the bride, drunk, chaining blunders and causing general unease in the assembly. “That idea made me laugh. It gave another image of myself, a little more barjo, which I am, but that I was afraid to show. Because it was more intimate. And that gives another reading of the song, which is much more cynical. Because it is a song which is very cynical, which does not speak at all of seduction “, explains Tim Dup.

“It’s a song that was born under pressure, in ‘make us a bit more formatted’ mode and I had too much of the seum, adds the singer. I did it in one day during the confinement and I got caught at my own game because I love it! It’s also nice to get out of your melodrama singer snobbery and do things that can be danced, that are sung, if only in anticipation of the stage. Having people moving and yelling, I wanted that! “

After Just to please you, Tim Dup has released a second single, called Open air. “It’s a song that comes from my first inspirations of English pop, the Supertramp, the Beatles that I listened to a lot”, explains the singer. The title begins “with a quote at the beginning which is taken from the documentary What will remain, from the second disc, where we went to film my grandfather in Corsica, he had released this sentence his mother had said to him: ‘My son, plant flowers, the others will pick them for you’. “A link with his son. previous record therefore, but also a global moral: “Remember that what you undertake today, it will always have a consequence for tomorrow. Make songs, create, undertake fights, struggles… There will be people to reap the fruits of all this. “

Third and last single before the release of The mad rush, all as solar Montecalvario, named after “one of the belvederes of the heights of Naples”, where the clip was shot. “It’s the story of two girls who meet in Naples and who lose sight of each other because there is one who lost the paper on which the other had written his address and his first name. a beautiful story and I love putting songs in places. Places inscribe a memory and you can project yourself there easily “, emphasizes Tim Dup.

If the tour of the singer’s second album was quickly cut short for health reasons linked to the Covid-19 pandemic, Tim Dup hopes to find his audience as soon as possible, during a tour, which he “approaches with caution, because we do not know and we have assembled, disassembled, reassembled, reassembled. But here, it is encouraging, I have the impression that we are going for the best and that in the first place in the fall the tour can start again. And that’s the essence of what I like about this job. ” Tim Dup will be on tour throughout France and will pass by La Cigale in Paris on November 4, 2021. “I was made for that, for the connection, to eat, to drink, to meet people, to share …”, concludes l ‘artist.

Born on December 7, 1994 in Rambouillet, Timothée Duperray, his real name, was passionate about music very early on. As a child, he took piano lessons and began to compose. In addition to studies in social sciences, he began to perform in small rooms and followed the first parts, in particular those of Benjamin Biolay, Dominique A or Philippe Katerine. “I did a first degree in social sciences, sociology and political science and afterwards I did a master’s degree in media and communication, explains Tim Dup. I have always made music alongside. And when I returned to CELSA (École des Hautes Etudes en Sciences de l’Information et de la Communication, in Paris editor’s note) in my second license, music still took me a lot of time and I released my EP (To the polar bears, released in 2016), so I was missing a lot of the lessons. “

Tim Dup gives up the school benches and thus launches completely in the music. His three albums will be released, Happy melancholy in 2017, What will be left of it? in January 2020 and therefore The mad rush in June 2021. So many records which, despite the label of melancholy singer that they have stuck on his forehead, have made him one of the new faces of French song. “My image, I do not care a bit. The labels, they stay, they go away … Even if in France, once you have a label, you are well listed. But I find it pretty cool. worry and continue to make albums with the same pleasure. But it is certain that there are clichés which remain: often it is’ juvenile air ‘, in college mode,’ but it is crazy, it is very mature for his age. But it can be positive, “comments Tim Dup, who definitely has nothing more to prove to anyone.