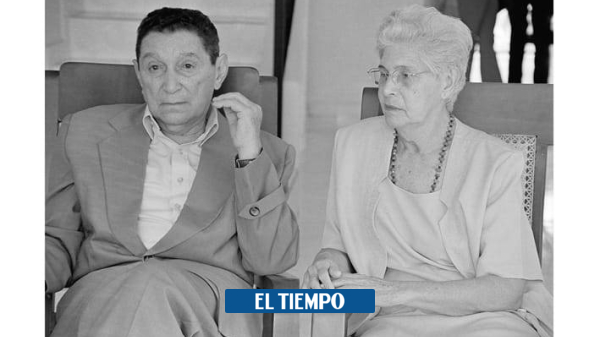 “I have a piece of paper in my pocket that my uncle Rafa sends you,” said a niece of Rafael Escalona Martínez to Marina Arzuaga Mejía. They both studied at the Magdalena School, a boarding school for girls in Santa Marta. Thus began the conquest of the patillalero composer to the sheltered daughter of a prestante family of La Paz.

Rafael Escalona already had a legion of inseparable friends, a reputation for being in love with all of them and had composed classics such as The Chevrolito and the first ‘jerre-jerre’ when his most important love, La Maye, crossed his path. The romance that would prevail over many other conquests of the pin-shaped composer began around 1945.

Marina Arzuaga Mejía (1929 -2020) would be the woman with whom Rafael Calixto Escalona Martínez would marry in April 1951. After the wedding, the composer disappeared from the parties with friends for a month and composed the song The married man.

Died by a respiratory disease (different from covid-19) on the night of December 22, in Valledupar, the famous Maye inspired several of the songs of the emblematic composer vallenato and the story of their love affairs was told by Consuelo Araujonoguera, ‘La cacica’, in the book Escalona, ​​the man and the myth, which was part of his trilogy of canonical vallenato texts.

Here’s a look at the history of songs inspired by La Maye.

This song was the first of those that Escalona composed for ‘La Maye’, in 1947. With great difficulty, conjured with the insistence that the composer had to conquer women with verses, papers and gallantry, he had managed to be accepted by Marina Arzuaga , a young girl from La Paz.

She knew that the composer traveled from one side of the Magdalena Grande province to the other and that the same gallantry that he dedicated to her had with the others. But finally, he had admitted to paying her a visit. And her family, even against those loves – she did not consider Rafael Escalona to be the man for her – gave her the green light to visit her. And that made La Paz consider that it was an official commitment.

In her book, Consuelo Araujonoguera relates that Marina’s father was clear about how much he had to take care of his daughter. “Here he comes to visit her and from here he takes her out for the church,” he had said.

So La Maye became the official girlfriend and convinced Escalona to finish her high school in Santa Marta (She was also studying there, at the Magdalena School). The idea of ​​her was to be able to see herself far from the surveillance of her parents. His was to finally get rid of that reproach that many made him to discard their loves because he was not even a high school graduate.

And, according to the book, even though he was always traveling, he did a whole farewell to his people in Valledupar, just before going to the Liceo Celedón. And he left, not without first dedicating to Maye, who had not yet traveled to her school, the song ‘Farewell’:

“I come to give you my farewell
with this sentimental meringue
so you know, maye dear,
I’m leaving Valledupar. “

The song was one of many that the young interpreter Guillermo Buitrago recorded for Escalona and popularized his name. From then on he had quite a few versions, including that of Carlos Vives.

2. The crescent of Caesar

After a time of official courtship (in which he was also hanging out with two great rivals of La Maye: ‘The little monkey with green eyes’ and ‘Vevita’ Manjarrés (It was Vevita who he wrote The testament and not La Maye, as is often believed), to which he also wrote songs.

See Also:  The most natural Marilyn looks out at the Film Library Culture

Escalona composed this song after an attempt to go visit La Maye, from Valledupar to La Paz. Although La Paz is a neighboring town, very close, the trip, which was to be short, took 72 hours to complete. They were already on their way, in Leonardo Maya’s car, when the storm clouds made the surrounding landscape disappear and Maya said that she didn’t dare to drive in that weather. So they looked for a place to shelter and formed a party.

“Seventy-two hours later, when it had cleared in the city but it was still” raining “good whiskey in the throats of the two friends,” wrote Araujonoguera, ” was born The crescent of Cesar, a walk dedicated to La Maye, which has among its twelve stanzas this one that alone would be enough to consecrate its author as the undisputed master of the vallenato narrative (…):

“It’s raining in the Nevada
and it will rain in the Valley,
The lightning is seen
like a candle that goes out. ”

The story of ‘La Cacica’ also reflects the emotion of La Maye, upon hearing the song: “All this allowed her to understand, with a reasoning that she had never done before, that it was natural that he sometimes did not come to see her, because Of course, every day is not the same and sometimes you can and sometimes you can’t. ” Thus he recorded in stanzas like the following:

“Maye, don’t be afraid of him
to the growing Caesar,
that I’m going to cross it
it’s over the Salguero bridge “.

“And I keep falling in love in life
everyone who inspires me.
And dawning on the street
although La Maye is offended.
Partying when I want
in my house and outside of it “

The verses were composed after a month of leading the exemplary life of a married man. According to La Cacica, Escalona had “untimely married” to La Maye on April 14, 1951, at four in the morning. They were married by Father Fray Joaquín de Orihuela in the church of San Francisco de Asís, in La Paz. The couple settled in Valledupar. The Arzuaga family had a farm where Escalona began working as a farmer. His friends miss him and one day they see him and make jokes about the change given by marriage. It didn’t take long, in July, to get them together and show them this song in which he responded to them.

See Also:  Neither holy nor perfect ... Goodbye to the topics of the ideal mother

La Maye had many reasons to be jealous. For years her rivalry for Rafael Escalona’s love with young women from other towns, even those who studied together with her, always kept her on guard. She was the official bride and many times she gave ultimatums to her lover, but they came back. Already married and when their two older daughters, Ada Luz and Rosa María were born, Maye continued to realize that her husband had gone out and that perhaps not much had changed. So Escalona composed Maye’s jealousy.

“Tranquilize, Maye,
leave Rafael alone,
that I spend on the street
I always return the same “.

Rafael Escalona had composed The brazilian and as the song became popular, Maye seemed to get more angry. It was 1958 when he composed this vallenato walk in which he sought to give an explanation.

“Because of the Brazilian,
that it was not my fault,
La Maye is resentful
And I’m sorry for her. ”

The arguments in marriage caused by this discussion were portrayed in the stanzas of this song:

“You started saying
what if I went with her
You burned the border
between Colombia and Brazil “.

And there is the comfort that Escalona tries to give him:

“And this is what it’s worth, Maye,
I come to tell you,
that she lives in Brazil
and I with you in El Valle “.