Find here all of our live #CONFLANS

19h04 : In Montpellier, in front of the prefecture.

18h58 : Gathering in front of the school complex in Apt (Vaucluse)

18h58 : People in Belfort. Moving speeches and calls for unity and solidarity from all in the face of barbarism. The teachers recall their already daily struggle against fanaticism and the institution’s lack of overall support. As proof, the privatization, reform after reform, of the school, the need not to “make waves”. Too many teachers have fallen, dead, having launched a last cry of appeal around a profession which no longer attracts anyone. The evil is deep. When will the acts? Resources for our school? When will we really listen to the needs of those who form future citizens?

18h58 : Here are new images and testimonies of the day’s events in honor of Samuel Paty.

18h43 : Samuel Paty’s assassin is called Abdoullakh Anzorov, a young Russian of 18 years old. Franceinfo looks in this article on the profile of the young terrorist.

18h44 : “These terrorists have nothing religious. They claim the Prophet as the Qur’an says: He who killed a man is the whole of humanity he killed. The Prophet does not need those people.“

In an interview with AFP, this Lyon religious leader reacts to the attack on Professor Samuel Paty.

18h30 : Currently in front of the town hall of Rambouillet

18h30 : You continue to send us photos of the gatherings organized in tribute to Samuel Paty. Thank you !

18h23 : In a press release, the Académie Goncourt “wishes to express its deep emotion, its indignation, its deep sadness and its anger “ after the assassination of the history-geography professor. “Samuel Paty died for having held high what founds our society, our State and our Republic, namely the exercise of critical thinking, freedom of expression and opinion, the awakening of consciences, the promotion of humanist ideas.“, estimates the Academy.

18h09 : Who are the eleven people in custody and what do we know about their link with the terrorist? Franceinfo provides an update in this article.

• Tens of thousands of people march across France to pay tribute to Professor Samuel Paty, killed in an Islamist attack on Friday. Follow our live.

• An eleventh person has been taken into custody, Franceinfo has learned from a judicial source. This is a friend of the aggressor, arrested in Evreux, continues the same source.

• Prime Minister Jean Castex announced that the aid of 150 euros unveiled this week for the most precarious people would be extended to all young people benefiting from housing assistance as well as to scholarship students.

• Julian Alaphilippe did not go after his first Tour of Flanders. While in the leading group, the French crashed into a motorcycle, leaving the victory to Mathieu Van der Poel. Victim of a wrist fracture, he will be operated on tomorrow.

17h33 : #Conflans #I am a teacherGathering in Poitiers

17h33 : #conflans the Perpignanais in front of their prefecture

17h51 : We continue our tour of France of tributes to Samuel Paty. Thank you for your photos:

17h24 : There are also many people in Toulouse, Marseille or Bordeaux to pay tribute to the teacher Samuel Paty, assassinated on Friday.

16h47 : Here are new images of the gatherings in honor of Samuel Paty. This time, we are going to Châteauroux, Troyes and Bourg-en-Bresse. Thank you @Maryse, @ Michèle and @No market for these photos.

16h41 : #ConflansSaintHonorine In order to honor the memory of the teacher beheaded on Friday October 16 in front of the establishment by an Islamist terrorist, the Department proposes to rename the Bois d’Aulne college by the name of Samuel Paty.➡️https://t.co/4fdAsV6mth https://t.co/5OWl4ia0B8

16h41 : The Yvelines department, which manages the Bois d’Aulne college in which Samuel Paty worked, proposes to rename the establishment with the name of the murdered teacher “in order to honor” his memory.

16h35 : This is one of the questions that arise after the death of teacher Samuel Paty. What did the intelligence services know and what signs could have alerted them? Elements of answer in this article.

16h28 : Here is the testimony, at the microphone of franceinfo, of a teacher present at the demonstration Place de la République in tribute to Samuel Paty.

16h21 : Demonstration of support for Blois 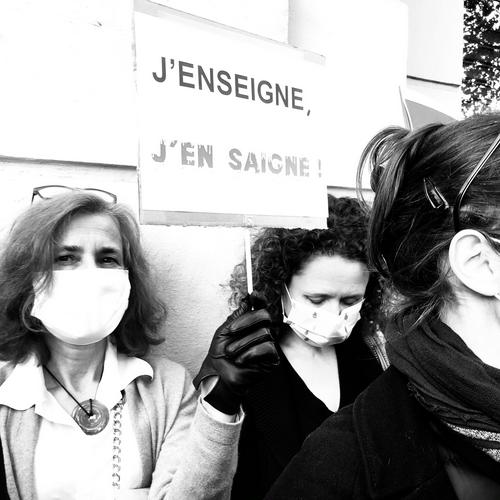 16h21 : Here are some photos of the events in Paris, Blois or Cahors, organized in memory of Samuel Paty.

16h10 : Present at Place de la République, the Prime Minister has just posted a video of the demonstration, accompanied by a short statement. “You don’t scare us”, he says.

15h57 : Thank you @Paddyfrogger and @Perpignansoutien, present in the gatherings, for their photos.

15h40 : Some came with the headline “Tout ça pour ça” by #CharlieHebdo, displayed near the monument to the 50-Hostages around which the #SamuelPaty #Nantes rally is organized https://t.co/truImC9nWD

15h39 : In Nantes, a protester wears a pencil during the rally in tribute to Samuel Paty. A journalist from Telegram is on site.