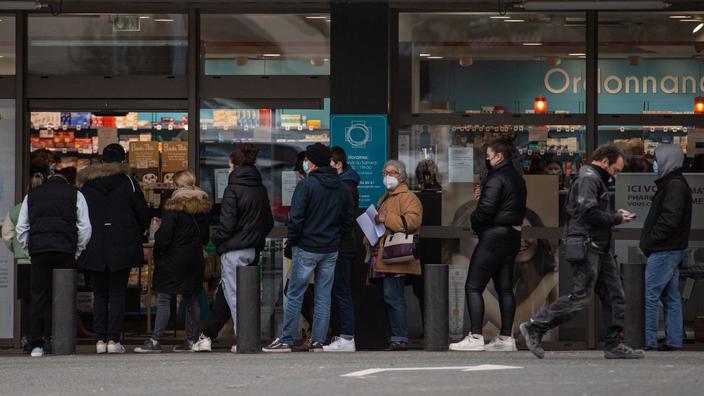 This is the “first drop in the number of tests since the start of the 5th wave”, notes the Drees. But the demand remains massive.

The pressure on pharmacies and laboratories is starting to come down. According to the latest data published by the Department of Research, Studies, Evaluation and Statistics (Drees), attached to the Ministry of Health, the number of tests carried out last week is down, after a record early January.

Read alsoCovid-19: with the outbreak of cases, should we still test everything?

From January 10 to 16, 11.3 million samples were validated by a health professional, a decrease of 780,000 compared to the week before, “that is […] 6,4%“. The twelve million mark had then been narrowly crossed, and this peak, driven by the Omicron variant and the holiday season, now seems behind us.

It’s about the “first drop in the number of tests since the start of the 5th wave“, underlines the DREES, which specifies that seven out of ten samples are antigenic. Despite this setback, the pace imposed on the sector remains intense: last week, more than a million tests were carried out six days a week, and the daily record was reached on January 10, with 2.28 million samples. in just one day.

The sharp increase in recent days was due in particular to the “under 16“, the start of the school year having led to significant screening in schools. Since the “modification of the health protocol» in these places has relieved the pressure: demand is falling more particularly among 0-15 year olds, but this decline is also observed in all the other brackets, although less markedly.

The beginning of the decline observed in the figures also leads to a reduction in the time between the sampling and the rendering of the result for the RT-PCR tests.

SEE ALSO – Covid-19: a screening center has emerged within a school in La Rochelle

Questions about the role of tests

The rush on tests observed during this fifth wave was particularly marked: since November 1, according to DREES, more than 66.8 million samples have been validated, including 13.8 million between Christmas and the day of the year and 24.1 million in two weeks, in January.

While the Omicron variant leads to an outbreak of contamination which continues to this day, some question the usefulness of continuing such a heavy screening campaign, both for the French and for professionals and public authorities. Some call for people to stop testing, a point of view disputed by epidemiologists.

Laporte case: “I reject the idea of ​​corruption”, Mohed Altrad defends himself

Video: Russian astronauts in the field