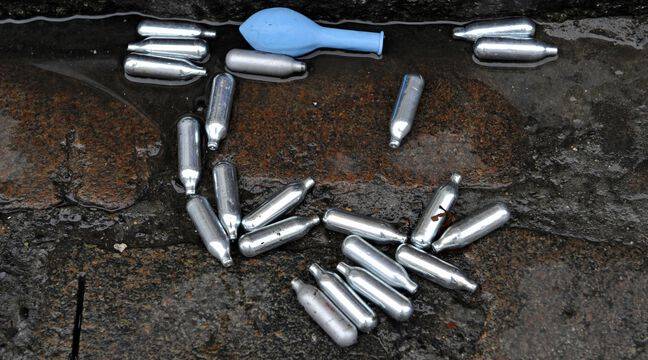 It was last Tuesday, on the Champs-Elysées. A motorist in her twenties lost control of her vehicle and hit head-on four pedestrians who were waiting on the central reservation of a protected passage. Three of them were rushed to hospital with absolute urgency. According to the first elements of the investigation, the young woman had just inhaled “nitrous oxide”, laughing gas now nicknamed “proto”. “His brain gave way,” confided the passenger of the vehicle to our colleagues from
France 2. She did not have enough oxygen, suddenly she was no longer conscious. His foot accelerated and I took the handbrake to stop the car. “

Friday, correctional court of Bobigny, in Seine-Saint-Denis. At the helm this time, two young men suspected of engaging in laughing gas trafficking. During their arrests, 1,218 bottles of nitrous oxide were discovered as well as dozens of mini-siphons and balloons to inhale it, ready-to-use “kits” in short. The two cases are not linked but bear witness to a phenomenon that increasingly worries the authorities. “In Paris, on weekend mornings, the sidewalks of the Champs-Élysées are littered with hundreds of capsules and the presence of overexcited young people riding scooters testifies to the growing use of this product”, within the Paris police headquarters, which specifies that such scenes are observed in all the festive districts of the capital but also in the inner suburbs.

What is the scale of the phenomenon? Impossible to say because this gas, which is generally used for whipped cream siphons, is sold legally in all supermarkets or on the Internet. “We began to observe a misuse two or three years ago,” said Yvan Assioma, Ile-de-France secretary of the Alliance police union. It mainly concerns minors or young adults in a festive context. »Diverted from its use, the product is however far from harmless. Last April, the regional health agency of Ile-de-France issued a note for professionals to remind people of its dangers. Serious neurological disorders sometimes going as far as paraplegia, anxiety, anemia, regular headaches, burns linked to the explosion of cylinders … And the health agency to insist: “recovery may be incomplete, sequelae are possible. “

A first step was taken in June with the adoption of a law reserving the sale of this product to adults. “The fact of provoking a minor to make a diverted use of a product of current consumption to obtain psychoactive effects from it” can be punished with a penalty of 15,000 euros. In fact, all you have to do is check the “major” box on the Internet to purchase small cylinders. Especially since this law, notes the Paris police headquarters, “does not allow action against consumers, adults and minors, who use it on public roads or while driving a vehicle”. It is therefore impossible to subject motorists to screening, as is the case for alcohol or cannabis consumption.

For the time being, however, the link between the consumption of laughing gas and delinquency remains difficult to establish. “Most of the facts observed concern traffic accidents or risky driving”, assures Yvan Assioma. According to the authorities themselves, cases involving people who have inhaled nitrous oxide are relatively rare. Some fights or acts of violence. In March, for example, a teenage girl fled to the 14th arrondissement police station, denouncing violence from her boyfriend who had just consumed it. “To speak of a direct link, in the few cases where the product has been cited, between consumption and commission of an offense remains for the time being daring,” insists the police headquarters.