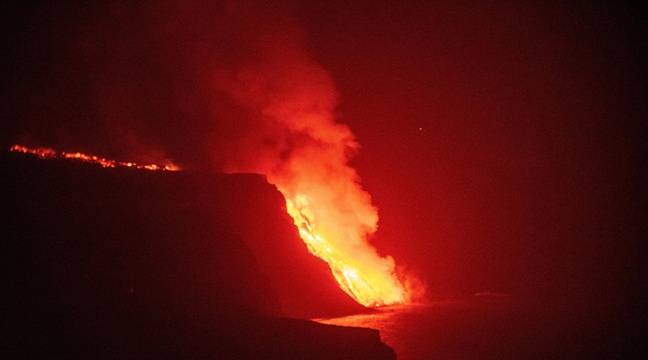 Lava of the volcano that erupted ten days ago on the island of La Palma, in the Spanish Canary Islands archipelago, reached the ocean on the night of Tuesday to Wednesday, a potentially dangerous phenomenon, announced the Canary Islands Volcanological Institute (Involcan).

“The lava flow has reached the sea at Playa Nueva,” said Involcan on his Twitter account shortly after midnight. The Cumbre Vieja volcano erupted on September 19. On Tuesday afternoon, the lava, which had varied in speed over the past few days, even coming to rest at one point, was still some half a mile from the sea, making it impossible to predict when she would reach the ocean. This encounter between molten lava and water was particularly feared because of the production of toxic gas and harmful particles that it could entrain, which makes it potentially dangerous.

For this reason, the regional government of the archipelago had decreed an “exclusion radius of 2 nautical miles” around the place where the lava was expected to arrive. On Monday, residents of several neighborhoods in Tazacorte, a village near the coast, had been called on to confine themselves due to fears of toxic gas emanation resulting from the arrival of lava in the ocean.

This decision had been taken because of “the possibility that there will be a small shock when the magma enters the sea water, and that this small shock causes vapors which can be toxic”, had underlined the technical director of the Canary Islands Volcanic Emergency Plan (Pevolca), Miguel Ángel Morcuende.

The entry of the lava brood into the sea came a few hours after the government released Tuesday 10.5 million euros in direct aid to victims of the volcanic eruption, in particular to buy housing for them. people who have seen their homes engulfed in lava.

The state of natural disaster has been declared on this island of 85,000 inhabitants, where lava flows have destroyed a total of 589 buildings – not all of which are dwellings – and covered 258 hectares of land, according to the European system of geospatial measurements Copernicus. The island of La Palma lives mainly from the cultivation of bananas and tourism. The eruption left no people dead or injured, but resulted in the evacuation of more than 6,000 people who had to leave their homes.