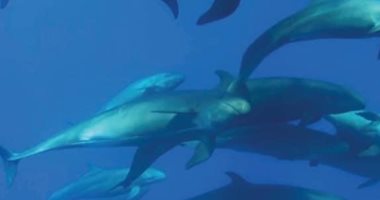 South of the Red Sea Governorate, specifically in the city of Marsa Alam, there is the so-called Dolphin House, the largest gathering in Africa and the Middle East of glass-nosed dolphins in the Samadai region.

Samadai is the largest dolphin swarm area in Africa and the Middle East, and the third in the world after the Hawaiian Islands and Brazil. Samadai takes the shape of a horseshoe, and is characterized by various coral reefs.

Before the arrival of tourist boats, the administration prevented the arrival of the shallow waters for the presence of mothers of dolphins and their young in the morning, with the aim of preserving them and not colliding with them, in the Samadai area, as well as Al-Arq and Al-Fanous north of Hurghada.

The Samadai reefs area is also one of the largest marine areas that is characterized by a distinctive biological diversity, as this area has been prepared for a sustainable development program for it, its economic use and the realization of financial resources for its management, through diving trips from tourists to this area, while preserving in the first place the natural resource, which is Dolphins and coral reefs.


Flocks of dolphins with Samadai

6 Simple Tips.. How to Protect Yourself from Monkey Pox

Five bacteria have been found linked to aggressive prostate cancer