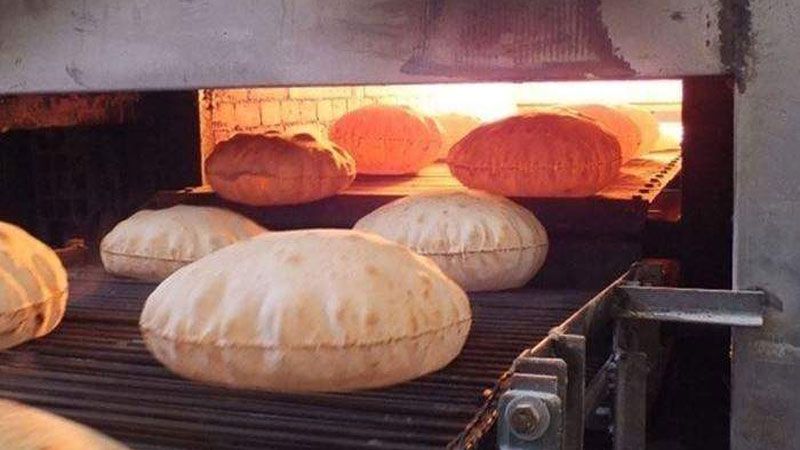 The queues in front of the bakeries forced the Ministry of Economy to limit the subsidy to Arabic bread only and raise the price of the bundle to a maximum of 16,000, but the crisis has not ended, especially since the Banque du Liban still controls the file of opening credits for mills.

Ibrahim: To develop a plan to secure flour in the long term

In this context, Ali Ibrahim, the head of the Bakery Owners Syndicate, described the situation in the bakeries today as “better than yesterday, and it will return to normal in the next two days after securing flour from mills that own subsidized wheat.”

In a radio interview, Ibrahim pointed out that “extra” flour is not available in the Lebanese market, warning of imaginary prices for foodstuffs that depend on this type of flour if imported from abroad.

Ibrahim asked the government to keep subsidies on a loaf of bread, and to put in place a plan to secure flour in the long term, not just for a few weeks.

In a press interview, Ibrahim affirmed that “the Minister of Economy’s decision yesterday to limit subsidies to Arabic bread flour only, will be reflected in all bakeries, large and small, and will inevitably lead to a significant increase in the prices of manakish, sourdough bread, French bread, hamburger bread and baguettes.”

Ibrahim pointed out that “the decision to limit subsidies to Arabic bread only is not temporary, but rather permanent, which means that the $150 million loan from the World Bank allocated to purchase wheat and maintain the price of a bundle of bread will be limited only to supporting the production of Arabic bread.”

And about the reflection of the decision on the work of the bakeries, he said: “We have to wait and see .. the rise in prices will be significant, and we will see who will be able to buy.”

Hoteit: Arabic bread will be delivered naturally to citizens today

In turn, the head of the Millers’ Syndicate, Ahmed Hoteit, indicated that “the concerned authorities decided to solve the crisis in two phases, the first of which started yesterday, after the Minister of Economy decided to redistribute the surplus wheat at some mills to the rest of the stopped mills, and thus the mills began Work since last night, and today all the bakeries will open and deliver Arabic bread naturally to the citizens.”

Hoteit added in a press interview that “the second phase is being completed today in the cabinet and is based on promises we received from the Minister of Economy, after communication between him and Prime Minister Najib Mikati, that additional funds will be spent on four ships loaded with wheat in today’s cabinet session.”

Flour distributors in the south are angry

Distributors of flour from different regions of the south held an emergency meeting at the home of the agent of the mills in the south, Ali Ramal in Al-Duweir, to discuss the new flour crisis and the Ministry of Economy’s prevention of handing it over to the Manaqeesh, Patissiri and Markouk bakeries.

The meeting included a call with the Director of the Office of the Speaker of Parliament, Nabih Berri in Moseleh, MP Hani Qubaisi, and the Director General of the Ministry of Economy, Dr. Muhammad Abu Haidar.

Rammal issued a statement on behalf of the meeting, declaring that “if the Ministry of Economy’s decision not to deliver the ovens of manakish, patisserie and marquq flour is not reversed, we have a tendency to escalate and to a real revolution, starting next Tuesday, when we have run out of all quantities of flour.”

“The mills warned that any flour truck that comes out of their gates, the small bakeries will unload their loads and pay for them, even if the loads will be unloaded into plastic tanks, which will be ready in all areas as of today.

Moghrebel: We warn against touching the loaves of the poor, workers and the deprived

For his part, the head of the Federation of Trade Unions and Employers in Nabatiyeh, Hussein Wahbi Mogharbel, warned against “touching the loaf of the poor, workers, the disadvantaged and the vulnerable,” and said: “If the flour runs out as the reason, as you claim, let the Bank of Lebanon take the initiative to pay the credits and import wheat,” stressing that “the government must Providing flour and developing a plan for treatment before it becomes a caretaker government.”

Moghrebel indicated in a press interview that “the prices of commodities and foodstuffs rose frighteningly after the rise in fuel prices under the pretext of the rise in the price of the dollar, which lost the value of the salaries of workers and employees.” before the social explosion.

Moghrebel announced that he “stands by the bakery owners who staged a sit-in today in Al-Duweir, demanding the provision of flour.”