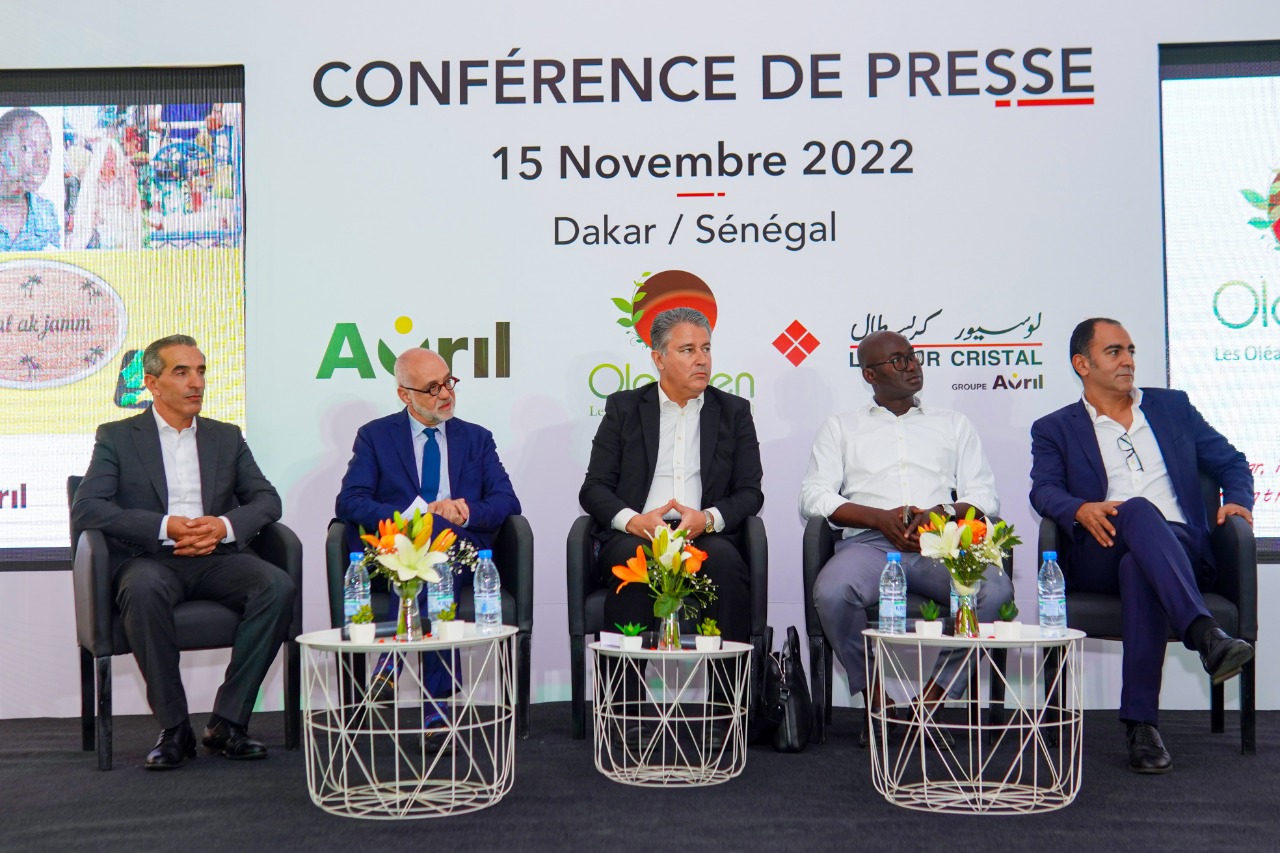 Lhe large Moroccan groups legitimately nurture expansionist tendencies. Which is fair game in the face of a narrow domestic market, moreover characterized by increasingly fierce competition. The royal orientation towards the revitalization of South-South cooperation has served as a springboard for several large Moroccan groups, wishing to extend their activities outside the Kingdom, particularly in West Africa. Obviously, this part of the South of the Sahara constitutes for many national operators the first stage of their establishment in Africa, a continent which is seeing its middle class grow. The geographical and cultural proximity, the absence of language barriers (French in common), the presence of national operators as well as the good economic and diplomatic relations between Morocco and several West African countries, are so many attractions for national companies looking for new sources of growth outside Morocco.

It is in this context that Lesieur Cristal has initiated a new phase of growth in its activities in Africa, in cooperation with Avril, its reference shareholder. In 2021, he entrusted him with the development of his African assets in the consumer goods sector. The press trip recently organized by the Moroccan group to the Senegalese capital to visit the industrial units of its subsidiary Oleosen, enabled representatives of the national and Senegalese press to find out more about Lesieur Cristal’s “African strategy”. A pioneer in Morocco and regional agro-industrial leader, Lesieur Cristal has been supporting the modernization of the Kingdom’s olive and oilseed sectors for nearly 80 years..

The Moroccan company intends to play the role of lever for the development of the French group Avril on the African continent. With 20% of its activity abroad in 2021, the group listed on the Casablanca Stock Exchange exports its products to 40 countries around the world, including 22 in Africa, where it has notably succeeded in establishing its brands strongly among consumers. in Senegal, Angola and the three Guineas, while continuing to strengthen its positions nationally in all of its segments. Note that Lesieur Cristal employs more than 1,500 people in the three countries where it operates (Morocco, Senegal and Tunisia).

No to all-out expansion

The press conference organized on the occasion of the visit to the edible oil refining and packaging plant and the new industrial soap unit of Oleosen, the Senegalese subsidiary of Lesieur Cristal, was an opportunity for journalists to exchange at random with the top management of the listed company. When asked whether Lesieur Cristal was going to multiply its establishments on the continent, the top management of the Moroccan company, headed by Brahim Laroui, CEO of the group, revealed its interest in certain markets, to mention only the Côte d’Ivoire and Cameroon, two buoyant markets in which Lesieur Cristal could play a leading role. Moreover, it is known that the time has come to consolidate the activities of the Senegalese and Tunisian subsidiaries.

The growth of Lesieur Cristal outside Morocco is better understood thanks to the assertion of its CEO. “Lesieur Cristal’s international development is one of the pillars of our strategic redeployment. Beyond the production of oils, which is our core business, we want to develop our other historical know-how. The soap activity is one of them. The opening of the new site in Dakar will allow us to meet the strong growth in demand from the Senegalese market, but also to benefit from the regional position and the country’s logistical assets to be able to export to the new markets we are targeting, such as Mali, Guinea and Burkina Faso”, he assures.

Response to the inflationary context

Discussions during the press conference also focused on the impact of the inflationary context on the business model of the Moroccan group and that of its two African subsidiaries. “Obviously, we are affected by the rise in the prices of raw materials and freight and that of the prices per ton of soybeans and sunflower seeds, which have reached record levels,” admits Brahim Laroui. And to reveal: “We are trying to limit these impacts as much as possible by using, among other things, hedging and monitoring mechanisms at the level of world markets”. It should also be noted that the listed company pays great attention to upstream agriculture, a key component of the table oil value chain. For example, in Morocco, Lesieur Cristal’s approach contributes to the overall increase in value of sectors and territories. It is based in particular on the dissemination of sustainable and virtuous farming practices, the supervision and training of aggregated farmers, but also the coordination of partnerships with all the professional and institutional players in the ecosystems.

For its African development, Lesieur Cristal relies on the strike force of its local subsidiaries, including Oleosen, for the region of sub-Saharan Africa. Locomotive of the French group Avril to accelerate its development in Africa, Lesieur Cristal, Moroccan leader in edible oils and soap, took control of the Senegalese company in 2021. With 10% of the shares, the company AKF, local shareholder of Oleosen, remains in the capital of the company. For Stéphane Yrlès, General Secretary of Avril, the large-scale deployment carried out in Senegal is an example of successful cooperation. “This is a new realization of our common ambitions in Africa. Building on the success in its home market, Oleosen will continue its role as a gateway to the WAEMU (West African Economic and Monetary Union) region, thus offering Lesieur Cristal a real springboard for growth into new countries, in line with our wish to strengthen our common approach to creating food sovereignty in Africa”, explains the SG of the French group, which achieved a turnover of 6.9 billion euros in 2021. Note that Oleosen, which already has an edible oil refining and packaging plant in Dakar, is diversifying its production with the launch of a new industrial soap unit. Based on its historic site in Dakar, the latest-generation unit, which extends over an area of ​​2,500 m², is dedicated to the manufacture of personal hygiene products under the “La main” brand. Equipped with a production line at the forefront of standards, the new tool has a production capacity of more than 30,000 tons of soap per year. The new location has enabled the creation of 115 jobs for the benefit of the populations of the Dakar region. The recruitment of a hundred additional people is planned over time to meet the various needs of the site. The civil engineering works for the construction of the plant were entrusted to local companies recognized for their know-how and their compliance with occupational health and safety standards. It is important to emphasize that the project was carried out on time, for a start in 2022, despite the disruptions and restrictions linked to the health context of Covid-19. More than 65 million dirhams (6 million euros) have been mobilized for the construction of the industrial unit. “A confirmed player on the Senegalese market, Oleosen brings real added value to the country’s economy, and contributes to the influence of our reference shareholders in Africa”, says Désiré Ouedraogo, CEO of Oleosen. The manager did not fail to point out that the company he runs has practically doubled its turnover. This shows the level of activity of the subsidiary of the Moroccan company on the Senegalese market.

The project of a new refinery under study

A leading agro-industrial player in Senegal, Oleosen manufactures and markets vegetable oils (soya, palm and peanut) under its Jaara brand and under license to operate the Lesieur brand. Resulting from the intention of Senegalese entrepreneurs to produce locally a table oil of superior quality for households, Oleosen was backed from 2012 by two international groups: Avril, renowned in particular for its Lesieur and Puget brands, and the Castel group. recognized for its experience of African markets. It should be noted that the subsidiary of Lesieur Cristal, based in Dakar, makes use of the expertise of a team made up of more than 300 employees. Oleosen also markets oils from the Puget house, established in Provence since 1860 and which selects the best olive oils. It should also be noted that Oleosen also specializes in the distribution of Lesieur brand sauces and condiments: mayonnaise, ketchup and salad dressings. In the end, let us specify that the operator plans to install a new refinery in the new port of Bargny. The investment project is under study.

Apple’s foldable could get a self-healing display