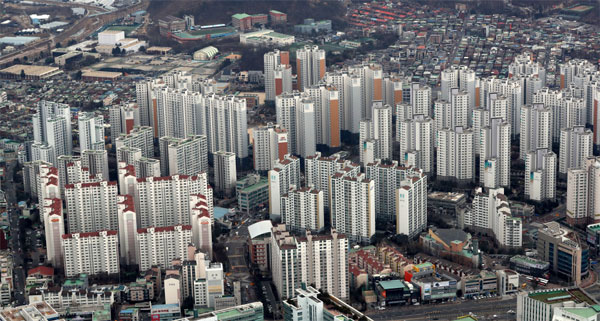 “After the loan regulations were relaxed, a lot of young people from Seoul came to see the house. They said that I should buy one even in Gyeonggi-do because house prices are so high. Here too, things under 900 million won are decreasing, but people in this neighborhood also think that house prices will go up. Pick up the sale.” (CEO of a real estate agency in Pyeongchon-dong, Dongan-gu, Anyang-si, Gyeonggi-do)

Apartment prices in the metropolitan area rose to the highest level in nine years. It is analyzed that as the loan limit for homeless end users has been increased from this month, the upward trend has been strengthened as purchases mainly flowed into the suburbs of Seoul, where there are many apartments under 900 million won, and Gyeonggi and Incheon. As criticism of the government’s easing of loan regulations grew, the policy was revised for end-users, stimulating the buying trend again.

According to the apartment price trend for the third week of July announced by the Korea Real Estate Agency on the 22nd, apartment sales prices in the metropolitan area rose by 0.36%, the highest rate in 9 years and 2 months since May 2012, when the Real Estate Agency started compiling statistics. . Apartment sales prices in the metropolitan area rose 0.35% in the third week of June, the largest increase since statistics were collected, and this record was broken within a month. An official from the Real Estate Agency analyzed, “Buying sales are steadily flowing into mid-to-low-priced complexes and reconstruction complexes that have favorable transportation and development benefits, such as the Metropolitan Express Railway (GTX) and the Shinbundang Line.” Anseong-si, Gyeonggi-do (0.89%) ranked mainly in Geumgwang-myeon, Ayang-dong, and Gongdo-eup, where traffic network expansion is expected, and Dongan-gu in Anyang (0.87%) mainly in Pyeongchon and Gwanyang-dong. Incheon rose mainly in Yeonsu-gu (0.59%) and Bupyeong-gu (0.50%), which have favorable conditions for transportation and reconstruction. 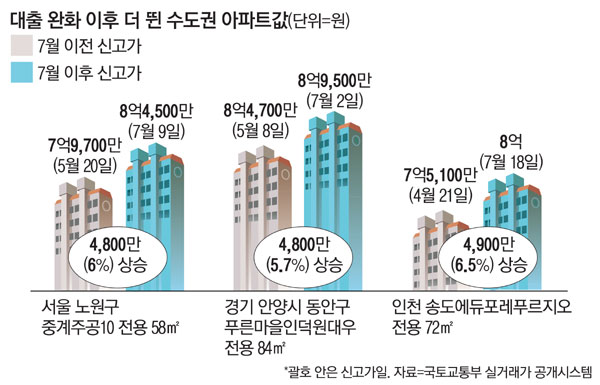 According to the actual transaction price disclosure system of the Ministry of Land, Infrastructure and Transport, it was confirmed that apartment prices in the suburbs of Seoul and Gyeonggi-Incheon areas under 900 million won broke the new record price. The 58㎡ exclusive area of ​​Junggyejugong Complex 10, Nowon-gu, Seoul was reported for 797 million won at the end of May, and on July 9, it was traded at 845 million won, up about 50 million won, breaking the record. Apartments near Indeokwon Station on Line 4 are also using new prices this month. In anticipation of the opening of the GTX-C route, house prices soared as young people in their 30s and 40s joined the buying trend of apartments. The 84 m² dedicated to ‘Blue Village Indeokwon Daewoo’ in Dongan-gu, Anyang-si, Gyeonggi-do, which was traded at 847 million won in early May, was changed to 895 million won, up about 50 million won earlier this month.

Incheon Yeonsu-gu, where expectations for GTX are alive, is similar. According to the real transaction price disclosure system of the Ministry of Land, Infrastructure and Transport, the 72 m² dedicated to ‘Songdo Edufore Prugio’ in Yeonsu-gu, Incheon, which was traded at 751 million won at the end of April, was sold for 800 million won, up about 50 million won this month.

A representative from a nearby brokerage office said, “Apartment prices jumped a lot due to the good news of the GTX, and when the news that Songdo, Incheon was selected as a candidate for ‘K-Bio Lab Hub’ by the Ministry of Small and Medium Ventures, the asking price jumped by tens of millions of won in one day.” told

While the nationwide apartment sale price rose 0.27%, the increase was larger than last week (0.24%), while in Seoul, the increase increased from 0.15% last week to 0.19% this week, the largest increase in 1 year and 7 months. Apartment prices in Seoul were driven by the ‘Nodo River’ area, which is filled with low- and mid-priced apartments. “As long as interest rates do not rise by more than 1 percentage point, the market impact is expected to be negligible,” said Yeo Kyung-hee, senior researcher at Real Estate 114.