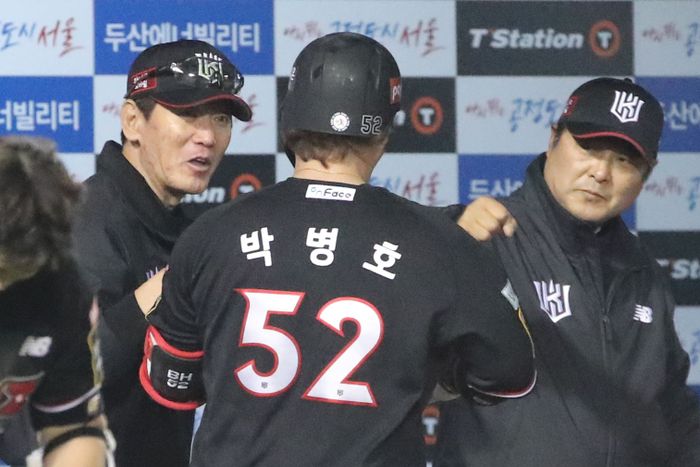 In the 8th inning, falling 0-2, Jung Woo-young attacked a 154km fastball and tied for two runs.

KT won 3-2 in the home game against LG Twins in professional baseball held at KT Wiz Park in Suwon on the 17th thanks to Cho Yong-ho’s finish-off hit in the ninth inning.

With this, KT escaped from a four-game losing streak. This season, he continued his strength with four wins against LG.

KT failed to attack LG’s foreign ace Casey Kelly that day, and was dragged 0-2 until the 7th inning. However, Park Byeong-ho, who is currently running the only double-digit home run in the KBO League, saved the team from crisis.

Park Byeong-ho, who could not record a hit in the previous three at-bats, hit his fourth at-bat in the 8th at 2nd and 3rd base. His opponent is Jung Woo-young, who is considered the strongest bullpen in the league.

LG’s core bullpen Jung Woo-young has appeared in 17 games this season and posted a 0.49 ERA. However, Park Byeong-ho pushed Jung Woo-young’s outer 154km two-seam fastball in a situation where he was driven with two strikes, and connected it with a two-run four that crossed the right fence.

Jung Woo-young, who was hit by Park Byung-ho, was shaken sharply. He gave Kim Jun-tae a walk and Oh Yun-seok a hit, and he was driven into a crisis at 2-4, 1 and 2, and then turned Park Kyung-soo to second base and grounded and barely finished the inning.

KT, whose morale increased due to Park Byeong-ho’s dramatic tie-up, eventually knocked down the LG bullpen. In the last attack of the ninth inning, the lead batter assignment team opened the door with a left-handed hit against Kim Jin-seong.

Kwon Dong-jin’s bunt failed to send the first-base runner to second, but Cho Yong-ho scored a final double and achieved a thrilling victory.

It was a valuable victory that broke the LG Mound, which ranked No. 1 in the bullpen ERA this season. In particular, the bullpen was so strong that LG did not allow a comeback even once in the previous game until the 7th inning this season.

However, veteran Park Byeong-ho changed the mood by bursting with a precious shot at the decisive moment, and eventually escaped from four consecutive losses and fired the signal for a rebound.

Park Byeong-ho, who has already operated the 13th home run gun, is cruising toward the 6th home run king in his career, widening the gap with Dong-hee Han (Lotte Giants) and Hyun-soo Kim (LG, 8), who are tied for second in this division.

last day of oil Sri Lanka is sad to prepare for the crisis – a mob to expel the president. – Live news