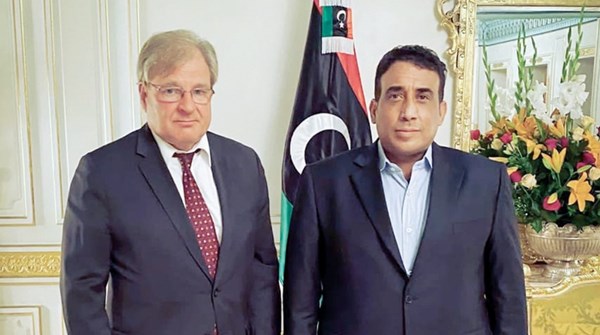 Yesterday, the President of the Libyan Presidential Council, Muhammad Al-Manfi, discussed with the ambassadors of the United States, France and Saudi Arabia to Tripoli the developments of the situation in the Libyan territories, and ways to unify the military institution and address the security problems in the country, an official source in the Libyan Presidential Council confirmed to Al-Ittihad.
The US embassy in Tripoli revealed, in a statement, the details of the Presidential Council’s talks with Ambassador Richard Norland, the US special envoy to Libya, explaining that the discussions touched on the mechanisms of unifying the military and security institutions and other institutions, as well as the file of elections and reconciliation, and the expulsion of foreign fighters from Libya.
The US Embassy in Tripoli said that the meeting that brought Norland together with the exile, in Tunisia, during the latter’s visit, witnessed a good discussion on a whole range of issues, especially the upcoming elections in December. The embassy pointed out that the meeting witnessed a discussion about improving security conditions in southern Libya, to better deal with issues such as human trafficking and the presence of mercenaries.
The Libyan political analyst, Ahmed Al-Mahdawi, explained that the exile is trying to give the new Libyan Presidential Council a role in the military file.
Al-Mahdawi confirmed, in exclusive statements to Al-Ittihad, that the exile refrained from attending the military parade of the National Army forces in Benghazi, for fear of entering into a confrontation with the armed militias in the west of the country, which recently stormed the headquarters of the Presidential Council in the capital, Tripoli.
The Libyan political analyst ruled out the possibility of an opportunity to unify the Libyan military institution in the coming days, especially since the other party represented in the militias rejects the idea of ​​a national army that follows the laws, regulations and institutions, pointing out that the terrorist group “Brotherhood” fears the Libyan armed forces, and the group’s keenness to destroy The national army, and the exhaustion of its ability, serves regional agendas seeking to control Libya
Al-Mahdawi stressed the need to give the Libyan Joint Military Committee “5 + 5” a greater opportunity to unify the country’s military institution, calling on the new executive authority to provide greater support to the committee so that it can complete the provisions of the Geneva and Ghadames outputs.