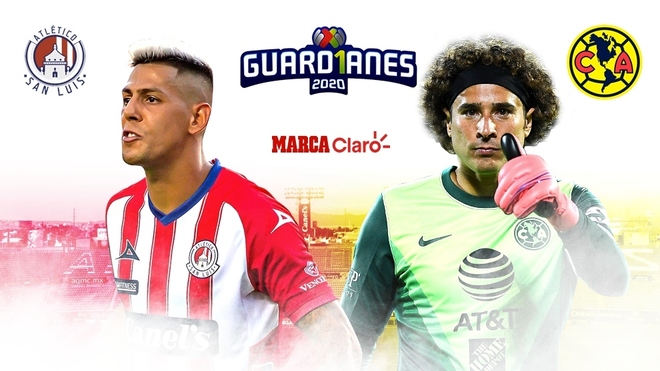 Liga MX Apertura 2020 At the moment all the statistics, goals, videos and photos minute by minute

ATS 1-2 AME | Min. 88 | Sorry the Americaaaaa. Alfonso Snchez bursts the crossbar of the Potosinos in a play in front of the goal.

Through thick and thin ALWAYS #Always#AmricaYYapic.twitter.com/3696COyS96

ATS 1-2 AME | Min. 82 | Uffffff! Felipe Rodrguez save at a corner kick, in what seemed the third of the Americas.

ATS 1-2 AME | Min. 78 | We are seconds away from entering the 80th minute. America chooses to damage the counter, but still does not make real danger.

ATS 1-2 AME | Min. 75 | Uffffff! Germn Berterame makes a great play, but his serve is cut from a corner kick by an American player. Neither does the corner kick!

ATS 1-2 AME | Min. 74 | America defends from the advantage in the final stretch of the match. The yellows put ice on the ball.

ATS 1-2 AME | Min. 68 | EIGHTOOOOOOA! Guillermo captures, as if he had glue on his gloves, another flash inside the area.

ATS 1-2 AME | Min. 63 | America closes the spaces and San Luis has to resort to balls, but without great danger.

#NoTeLoPierdas
49: GL for Henry Martin! With a header from the Yucatecan striker, the eagles remote the game.

ATS 1-2 AME | Min. 50 | America has already turned the game around at the start of the second half: Miguel Herrera still makes no changes.

ATS 1-2 AME | Min. 48 | Henry Martin connects a hammer blow only inside the small area to give the advantage to Americaaaaa. Goal of the eagles!

ATS 1-1 AME | Min. 46 | The complementary part of this match is underway with a tie on the scoreboard.

ATS 1-1 AME | Min. 44 | Ochoaaaaaaa! Memo captures a powerful shot from Mauro Quiroga in a short space. Impressive about the American goalkeeper to avoid the second.

ATS 1-1 AME | Min. 42 | Crdova’s escape to the Potosi area, however, the young Americanist commits an infraction.

ATS 1-1 AME | Min. 40 | We entered the final stretch of the first half with a 1-1 tie on the scoreboard. Goals from Ramiro Gonzlez (San Luis) and Aguilera (America).

#NoTeLoPierdas
30: GL! Ema Aguilera takes the penalty on her left and ties the match.

ATS 1-1 AME | Min. 35 | #ForceBruno It is Aguilera’s dedication to his Paraguayan partner who will be out of the field for six to eight months.

ATS 1-1 AME | Min. 33 | The meeting is already matched after half an hour in San Luis. The eagles tied it by way of the penalty.

ATS 1-1 AME | Min. 30 | ‘Ema’ Aguilera ties the cards with a masterful collection from the Argentine defender. A powerful shot that folds the local goalkeeper’s hands and kisses the nets.

ATS 1-0 AME | Min. 27 | There is an infraction on Henry Martin and the referee scores a foul! The Mexican falls into the area after a clash with Ramiro Gonzlez after Rodriguez concedes a rebound.

ATS 1-0 AME | Min. 25 | San Luis groups many people in the defensive zone, which complicates the elaboration of Americanist danger.

ATS 1-0 AME | Min. 23 | In the direct free kick, ‘Ema’ Aguilera pulls the trigger too high and the ball dies several meters above the local crossbar.

ATS 1-0 AME | Min. 21 | Rodrigo Noya knocks down Henry Martin and the referee signals a foul in favor of America.

ATS 1-0 AME | Min. 19 | The eagles wove their second advance with danger; After several touches the ball reached Crdova, but the attacker barely connected to the hands of the local goalkeeper.

ATS 1-0 AME | Min. 17 | The celebration of the rojiblancos after the goal by Ramiro Gonzlez. San Luis has an advantage at home.

ATS 1-0 AME | Min. 15 | Amricaaaa responds, but ‘Ema’ Aguilera did not give direction to her head in the San Luis area.

#NoTeLoPierdas
05: GL! Ramiro Gonzlez, with an accurate header, opens the scoring at the Alfonso Lastras Stadium.

ATS 1-0 AME | Min. 14 | REVIVE the GOAL of San Luis. A solid header from Gonzlez that Ochoa could not contain.

ATS 1-0 AME | Min. 11 | Ufffffff! Mauro Quiroga forgave America after heading out of order in the America area. It was the next one!

ATS 1-0 AME | Min. 09 | Miguel Herrera is not having a good time at the start of the match at Alfonso Lastras; There are already 11 goals received from his team in the current tournament.

ATS 1-0 AME | Min. 07 | In the first play of the Potosinos towards the front, the Argentine defender takes advantage of the bad Americanist marking to open the scoring.

ATS 0-0 AME | Min. 03 | Amrica, from the outset, shows that it wants to be the protagonist and is the first to link four and five passes in an advance that is cut off in the San Luis area.

ATS 0-0 AME | Min. 01 | Roll the ball on the Alfonso Lastras court! The eagles go to the Potosinos’ house with the mission of taking flight again.

Guillermo Ochoa leads these eagles with some changes in their alignment to seek to make a change after the negative results of the last weeks.

The eagles warm up and refine details on the Alfonso Lastras court.

The 11 holders of Guillermo Vzquez to face America.

With you our initial 11!

Come on, we won today!

Paul Aguilar and Luis Reyes, on the bench, and in good news for the eagles; Nicols Benedetti is also on the substitute bench.

This is how Alfonso Latras’ field looks like !! An excellent climate to play soccer in San Luis.

With all the health protocols of the #LigaBBVAMX, we get ready for the match between @AtletideSanLuis and @ClubAmerica at the Alfonso Lastras Stadium.#Guard1anes2020pic.twitter.com/Yn1TmbbZO4

The Liga MX shows part of the protocol designated for this meeting at Alfonso Lastras, with the intention of avoiding contagion of Covid-19 in favor of the footballers and elements around the game this Saturday.

[] The match preview is brought to you by @calientesports

And we leave you some data prior to this comparison between eagles and potosinos. America is urged to resume the good step in the Guardian.

All set for date 7#SOMOSAMRICApic.twitter.com/Gf5mZYQJFr

He America made its arrival at the Alfonso Lastras Stadium, from where to seek to get out of his losing streak with two consecutive defeats.

Everything ready at the Alfonso Lastras Stadium for the resumption of the seventh date of the Mexican championship in its Apertura 2020 edition. Amrica He has a dangerous visit to San Luis to face Atltico at the start of the Saturday activity. My name is Marco Polo and I will be happy to join you for the next three hours of this match.