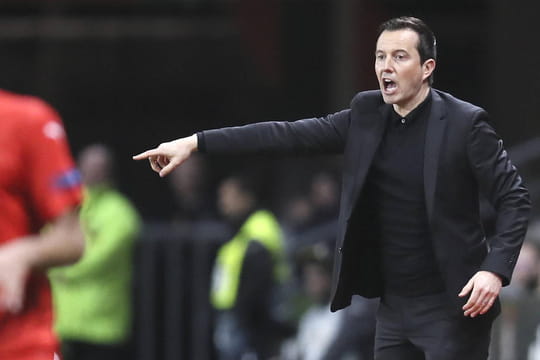 RENNES – NANTES – Incredibly, Stade Rennais managed to score two goals in additional time to finally win in the derby against Nantes on the score of 3 goals to 2, Friday night in Ligue 1. Discover the summary Match.

Substituting at kick-off, Benjamin Bourigeaud came into play in the second period and tied in extra time. The Rennes midfielder was happy when speaking at the microphone of Canal + at the end of the match: “It is an extraordinary moment this evening. Our state of mind, never giving up until the final whistle, that’s what makes us strong today. It was complicated for us today but the main thing is done with this victory in the derby. We thought we could do something in overtime , at least equalize so as not to lose this match. We did better by winning it and it’s an immense joy today. It’s good to continue our positive momentum and now we are going to have a good rest because on Tuesday we have a very complicated trip to Lille. “

The Nantes-based Imran Louza was upset at the microphone of Canal + and did not hang in front of the cameras when he spoke: “I have nothing to say, said the young midfielder from Nantes. It’s sad. How can we lead 2-1 ten minutes from the end and take two goals at the end of the match? This defeat in the derby, in this way, could well leave traces in the ranks of FC Nantes …

It’s over at Roazhon Park! Led 2 goals to 1 until the 94th minute, the Rennais managed to reverse the situation with two goals in two minutes, signed Bourigeaud (90th + 5) and Raphinha (90th + 7)! Incredible end of the match for Stade Rennais which wins against FC Nantes (3-2).

Stade Rennais is making an incredible turnaround! On a pivotal shot from Niang, Lafont turns to his left and Raphinha starts again to push the ball into the back of the net … but the assistant referee signals an offside at first. With the VAR, M. Millot finally grants the goal and Rennes leads 3-2!

Stade Rennais equalizes in extra time thanks to Benjamin Bourigeaud! The former RC Lens player takes a low-level cross from Gboho at the entrance to the surface and misleads Lafont with a well placed and slightly deflected shot. 2-2 between Rennes and Nantes!

Found on the left wing, Flavien Tait collides and transplanted into the axis to continue on a strike but it is too soft to worry Lafont who folds on the ball.

After a nice deviation from Niang in the background, Raphinha tries a half-volley from the right and is very close to lobing Lafont but the latter flies away to divert to a corner! This does nothing in the process for Rennes.

After having collected a yellow card, Abdoul-Kader Bamba leaves his place to Samuel Moutoussamy for these last moments in this derby. It was the last change of the match.

Mr. Millot allows six minutes of additional time in this derby between Rennes and Nantes! Everything is still possible in this unbridled end of the match between the two teams.

Christian Gourcuff makes a second change in this meeting. Percy Prado, for his first in Ligue 1, replaces Dennis Appiah, injured and who could not continue.

Third and last change for Julien Stéphan, who takes all the risks by bringing Romain Del Castillo in place of Eduardo Camavinga.

FC Nantes takes the lead in this end of the match! Departed from the collision, the Rennais forgot to return and Nantes negotiated a counter to four against two. The Nantes are playing well and Simon, with a little success, manages to deceive Mendy after a cross from Louza. 2-1 for Nantes ten minutes from the end of the match!

Mr. Millot interrupted the game for a few minutes because of a fog caused by smoke cracked by the Nantes ultras came in large numbers to Roazhon Park, but the game resumed.

FC Nantes is close to regaining the advantage! On the left side, Kader Bamba tumbles down and enters the surface before opening his foot. Mendy pushes back and at the far post, Blas appears to resume but misses his gesture and opens his foot too much …

Stade Rennais equalizes! Mbaye Niang hits this penalty but Alban Lafont pushes back … on Raphinha, who arrives launched and is the quickest to push the ball into the back of the net! 1-1 after 71 minutes of play between Rennes and Nantes.