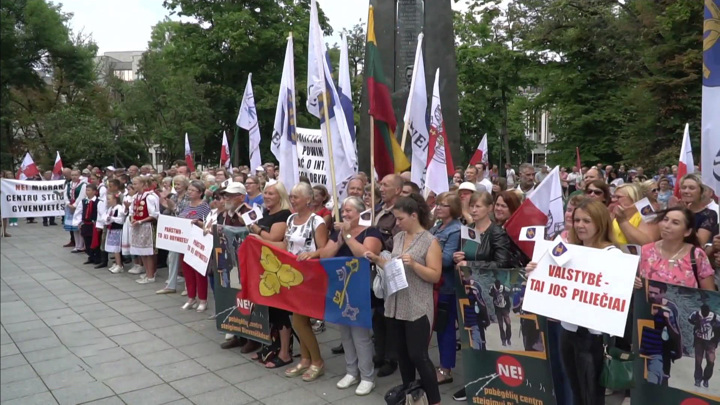 144 illegal immigrants were detained in Lithuania over the past day. The total number of migrants caught by the police and border guards has already exceeded 3.5 thousand people. This is 40 times more than a year ago. The migration crisis that hit the country has caused a series of protests: illegal immigrants riot in the accommodation centers, and local residents riot around. Why did the inhabitants of Africa and the Middle East need Lithuania, and how do they get there?

The migration wave brought a wave of protests to Lithuania. The action of the inhabitants of the Lithuanian Rudninkaya against the camp for migrants ended with the dispersal of the demonstrators, with detentions, truncheons and tear gas.

For a Lithuanian village, the picture is unusual. Residents blocked the road to the Ministry of Internal Affairs training ground, where the authorities decided to place a tent camp for illegal immigrants for 1.5 thousand places. The number of inhabitants in Rudninkai is three times less.

The government hastened to call the protesters provocateurs. The construction of the camp on the territory of the Rudninkai landfill and its settlement began in spite of everything. Residents are discussing the creation of self-defense units.

“We need to find physically strong guys who will be in direct contact and will be able to react in case of a critical situation. Everyone understands, there is no need to speak,” says a local resident.

Residents of the village of Devaniškės in eastern Lithuania decided to come to Vilnius themselves – an action against the placement of migrants was held in front of the Ministry of Internal Affairs.

“We are afraid for our children,” explains one of the demonstrators.

The Lithuanian authorities are planning to locate a center for the reception of illegal immigrants in an abandoned building opposite the school. The villagers, not finding understanding in Vilnius, turned to the Polish government. The fact is that mainly ethnic Poles live in Devyashiky.

Deputies of the Polish Seimas are outraged by the actions of the Lithuanian authorities.

“At the last session of the Seimas, I called on the government to react decisively on this issue. There was no reaction to this. I will write a request to the Minister of Foreign Affairs Zbigniew Rau about this, I will demand an explanation. Where is the Polish Embassy, ​​where is the reaction of the Republic of Poland to Lithuania’s violation of international treaties? ” – Polish parliamentarian Robert Vinnitsky is indignant.

But the migrants themselves do not want to live in such conditions. In the village of Verebeyai illegal immigrants staged a riot: in protest, they refused food and pelted the police with it.

Three weeks ago, all the refugees were kept in one camp.

There is not enough space at the Refugee Reception Center in Pabradė, Lithuania. An additional tent camp for 1000 places has already been built. But it can be seen that it is also inhabited: the laundry is drying on the fence, the bunks are very close to each other. Judging by the number of people, there will only be more such tents here.

Now the total number of those detained has exceeded 3 thousand people. On the border with Belarus, Lithuanian border guards catch more than 100 people every day. The infrastructure of small Lithuania was not ready for this. And the flow does not decrease.

How do they get into the territory of Lithuania? Journalists of the Vesti program conducted their own investigation.

There is no doubt that these people with backpacks in the forest crossed the border. Behind the border posts and a fence, which, according to the Lithuanian authorities, should protect from the flow of refugees.

Dozens of videos were found in one of the telegram channels, where detailed instructions are given on how to get from Iraq to Germany through Belarus and Lithuania.

“First: you need to apply for a Belarusian visa and book a plane ticket to Belarus. The whole process of obtaining a visa plus a flight costs from 400 to 500 dollars,” the Telegram channel says.

But this, of course, is not all expenses. In messengers, you can find contacts of taxi drivers on both sides of the border, and a list of mobile applications that will be useful during the trip. Once in Lithuania, migrants are looking for a transfer to Germany. Carriers can pick them up from the border itself, but this rarely happens – usually migrants leave the border towns or Vilnius, where they come on foot. Transportation costs from $ 500 to $ 1,500 per person.

But the correspondents did not find any mention of help from the Belarusian authorities in the studied Telegram channels. In Minsk, on the contrary, they stated that they are ready to cooperate with the EU in order to stop the route of illegal immigrants.

“If they want to really fight against illegal migration, then let them start with themselves. We see groups of people of a criminal nature in Lithuania… As soon as they liquidate these groups that bring migrants for money. If they need help, we will provide this help, “- promises the President of Belarus Alexander Lukashenko.

Against the background of reports from the border, even among Lithuanian politicians, calls were made to renew contacts with the official authorities of Belarus.

President of Lithuania Gitanas Nauseda, visiting the military training ground, reminded that Lithuania still does not intend to cooperate with the Belarusian side.

“What has been happening lately reminds of some, I would say, self-directed adjustment of the foreign policy course, and this is completely unacceptable. We will not speak with the dictator as he possibly expects. Foreign policy principles will remain unchanged,” the president emphasizes. Lithuania.

The Lithuanian authorities are planning to solve the problem with the help of barbed wire. The fence was planned along the entire length of the Lithuanian-Belarusian border, which is 550 kilometers. Here are just enough wire only 4.5. Lithuania asked neighbors for help. Estonia and Ukraine responded.

There was no extra wire in Poland; a helicopter was sent to Lithuania to patrol the border.

The European Union has promised urgent assistance to Lithuania, but not financial yet. Another 60 employees of the EU border agency Frontex will be transported to the republic. The introduction of a state of emergency is also possible, which will automatically expand the powers of the military and law enforcement officers. They should make a decision in the near future.