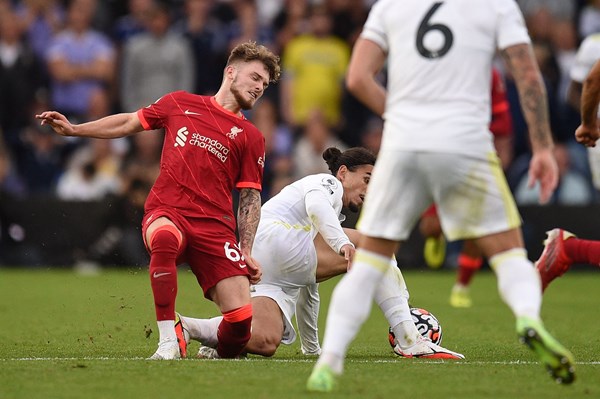 Liverpool coach Jurgen Klopp expressed his deep sadness over the injury of Harvey Elliott, the young player, during the red team’s 3-0 victory over Leeds United today, Sunday, in the fourth stage of the English Premier League.

Elliott suffered an ankle injury, during a joint ball in the middle of the field with Leeds’ Pascal Strick, who received a red card in the 60th minute, forcing the Liverpool player to leave the match stadium, affected by his injury.

In media statements after the match, Klopp said: “It was not good at all. I think everyone saw that the ankle was not in the right place, but the medical staff tried to do its job.” Klopp explained: We have to wait for the medical tests that the player will undergo, he is now in the hospital and we will see what happens.

The Liverpool coach added: “We saw how it affected the game and it was a shock to everyone, Elliott is like a younger brother to the players in the team, he plays with a group of veterans and has great quality and talent and what he was exposed to was really tough.”

Klopp explained: I cannot judge whether the interference was intentional or not, perhaps there was a difficulty in recognizing that, I did not celebrate the red card that the Leeds player received, we only cared about Elliott’s condition, but I do not imagine that this injury occurred intentionally, And I don’t want Strick to feel guilty.

The match was stopped for a few minutes to treat Elliott, before he was substituted when the result indicated a 2-0 lead for Liverpool over Leeds.

By defeating Leeds, Liverpool regained the tone of the victories that were absent from it in the last stage, with a 1-1 draw with its guest Chelsea before the last international break, as it raised its score to 10 points in third place, with a goal difference behind Manchester United and Chelsea, the second and third places on the Ranking, equals with him in the same balance.