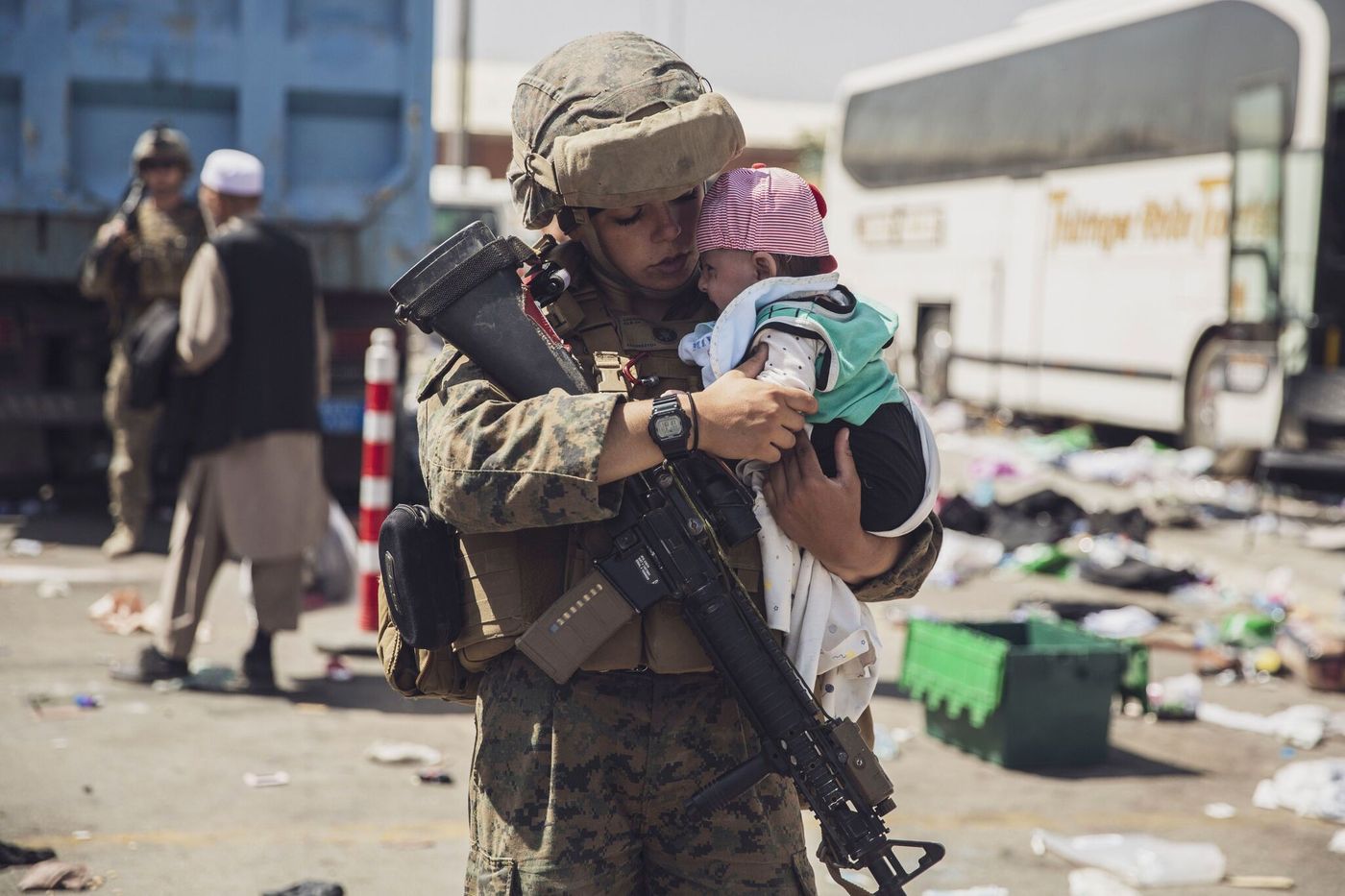 It will take a book for Zahra to explain, and to understand. Explain how, during these terrible days in August, desperation could have caused Afghans to cling to the cabin of American planes in full take-off, before falling and killing themselves. Understand what she herself went through, when she joined the crowd crowded outside the gates of Kabul airport before the imminent Taliban victory. Also understand this desperate wait, under a sun that makes her peel her skin, her feet bathing in a stagnant water channel running alongside the airport.

She started writing this book from a hotel in Brisbane, where the 25-year-old Afghan activist arrived in September, after several grueling days in Kabul and then in Dubai. “It was so hard to get here…” she breathes, mulling over the dreadful gears that have taken her from a cozy apartment in Kabul to a clinical hotel room in Australia.

Images of the American departure from Afghanistan have toured the planet. In Washington, they sparked a wave of criticism, which the suicide bombing at the Abbey gate of Kabul airport – thirteen American soldiers and 160 Afghans killed – turned into a hurricane on August 28. Republicans call for the resignation of Joe Biden, weakened. Democrats remain dumbfounded at this conclusion of twenty years of war ended by the collapse of the Afghan state and the meteoric victory of the Taliban. Even the figure of 120,000 evacuations in ten days, an airlift of exceptional magnitude, becomes inaudible amid references to Saigon, the eternal American trauma. The question resonates, again and again: how did the first power on the planet come to this?

Back to Wednesday, April 14, in the White House Treaty Room – an office where, 20 years earlier, George W. Bush had announced the first strikes in Afghanistan. There, Joe Biden wants to be firm as much as solemn: “I am now the fourth American president to manage the presence of American troops in Afghanistan, I will not pass this responsibility to a fifth” he asserts during his intervention. ” It’s time, he concludes after a quarter of an hour, to put an end to this eternal war ”.

Joe Biden’s conviction runs deep, the schedule is imposed on him

On the need to leave the country, the conviction of the American president is deep. But the schedule is imposed on him: on February 29, 2020, the administration of Donald Trump committed, in an agreement with the Taliban in Doha, to leave Afghanistan within 14 months. The countdown, set for May 1, 2021, puts America’s back to the wall. “If the United States had stayed too long beyond that date, the Taliban would have started attacking them again,” says Vanda Felbab-Brown, analyst at the US think tank Brookings and director of the Non-State Armed Groups Initiative. “Washington could not have managed this with the 2,500 soldiers present in the country”.

No more status quo possible, the choice is between withdrawal or « surge », an intensification of the military presence already attempted by Barack Obama. Joe Biden chooses withdrawal.

On May 1, the United States and the rest of the Western coalition therefore begin their departure. Its setting in motion is a brutal shock for an Afghan power which, after 20 years of presence, had convinced itself that the Americans would never leave. “Even after the Doha deal, the general feeling was that the United States might stay, and when Biden’s announcement came on April 14, it was already too late,” sighs an Afghan analyst, himself evacuated from Kabul.

Because Joe Biden doesn’t just want to leave Afghanistan. Scared by twenty years of war, fearing more than anything losses among American troops, he urges the Pentagon to go as quickly as possible. “A military retreat under threat from an enemy is one of the most complex military operations to perform, recalls Jonathan Schroden, program director at the American think tank CNA, and speed is one of the ways to mitigate these risks ”.

In the middle of the night, the Americans evacuate the Bagram air base

On May 8, General Mark Milley, Chief of Staff of the United States Armed Forces, assures us during a strategic meeting in the Pentagon basement that the bulk of the troops may have left the country in early July, well before the September 11 deadline set by the president. About 600 soldiers will remain to protect the airport and especially the American embassy in Kabul, a fortress and anthill where nearly 4,000 people work.

The schedule is held: on July 5, a dumbfounded Afghan general discovers that the Bagram air base, a huge military complex 60 kilometers north of Kabul, which in twenty years has become the epicenter of coalition operations in the country, is empty. . Fearing a last-minute attack, the Americans slipped away overnight, without warning their Afghan counterparts. A few days later, a security source told American media Politico that the withdrawal was “So to speak finished”.

But Joe Biden’s choice to limit the risk to his troops as much as possible does not just catch an incredulous Afghan government by surprise. It also takes the issue of a possible evacuation of Afghan civilians into the background. “It was an extreme dilemma for the Biden administration” summarizes Vanda Felbab-Brown. Twenty years of foreign occupation have resulted in the creation of a huge ecosystem of NGOs funded or supported by the coalition countries, which provide employment for a large part of the Afghan population. 90,000 people worked for these NGOs in 2013, according to New York Times. Figures that swell quickly if we add the families of these employees, and teachers, students, soldiers, police officers, judges – especially women – eager to leave the country in the event of the Taliban’s return.

To evacuate them upstream would be to take the Taliban victory for granted, at the risk of transforming this feeling into a self-fulfilling prophecy. “No one imagines at this time that the Taliban will be in Kabul in four months, the consensus is that the Afghan army will hold out at least until winter, and that 2022 will be the decisive year” explains Jonathan Schroden. Even Washington’s acceleration of the evacuations of interpreters who have worked for the US military leads to recriminations from Afghan President Ashraf Ghani. The former academic cast into the role of warlord fears that these departures will trigger panic.

Another very short-term evacuation deals the biggest blow to the Afghan state. In May, when the Taliban, galvanized by the news of the Westerners’ departure, triggered a “Spring offensive”, nearly 18,000 foreign civilians are leaving the country. Assigned to several bases, these engineers and mechanics were responsible for maintaining the planes and helicopters of the Afghan Air Force, Kabul’s crucial asset in its fight against the Taliban. The effect is immediate: SIGAR, the ruthless American inspector responsible for overseeing the reconstruction of Afghanistan, note in its report of July 30 that the operational readiness of the Afghan Air Force’s Blackhawk helicopters has collapsed, from 77% in April to 39% in June, even as the Taliban continue to win.

Corrupted, demoralized, scattered, the Afghan security forces relied on these planes and helicopters for their supplies, air support and the transport of special forces. Very quickly, the rumor spread within the army: the soldiers will not benefit from supplies or reinforcements. The Taliban are being kind to those who surrender. Desertions and massive surrenders are accelerating, army corps are disappearing, while the fundamentalist group tightens its grip on the big cities, forcing Washington to slow down its withdrawal.

American planes are carrying out strikes around Kandahar, the country’s second largest city, surrounded. It is already too late. Presented for two months as lightning, the Taliban advance further accelerated on August 6. The fall of Zaranj, the provincial capital in the west, marked the beginning of the disintegration of the Afghan state, which ended nine days later with the flight of Ashraf Ghani and the entry of the Taliban into Kabul on August 15.

The American Embassy urgently evacuates its personnel, and destroys what cannot be taken away. For a brief, dazzling period, the withdrawal was reversed: nearly 6,000 American troops and special forces from coalition countries landed at Kabul airport. Zahra, the Afghan activist, learns from a breathless neighbor in the stairwell of her apartment building. “At this moment, I see my life vanishing”, she says. She flees, like thousands of others, in incomprehensible chaos. The spontaneous efforts of foreign activists allow him to obtain, after days of terror, the visa essential for departure. It will be Australia, which she had never considered visiting… Quarantined in her hotel room, she begins to think about her book. To explain what happened in Kabul in August 2021, we will have to go back a long way, she says. Twenty years at least.

► Afghanistan on the brink of collapse

September 7. The Taliban announce a new government, made up of the movement’s most important and conservative figures. The flow of international aid is drying up, while nearly 75% of the budget of the previous regime was financed by the international community.

September 9. 97% of the Afghan population could fall below the poverty line (compared to 72% currently) if an international response to the political and economic crisis is not launched quickly, warns the United Nations.

September 13. The UN announces that it has raised nearly one billion euros for Afghanistan from international donors. Paris has announced that it will release 100 million euros in this context, when Washington will contribute 64 million euros. At the same time, a first commercial flight of the Pakistani company PIA touched down in Kabul, one of the first signs of normalization of the country.

► In Congress, the Biden administration under fire from critics

“We inherited a deadline, not a plan. “ Faced with a very critical parliamentary commission, Secretary of State Antony Blinken defended, Monday, September 13 in Congress, in Washington, the withdrawal from Afghanistan led by the Biden administration. The agreement signed with the Taliban by the Trump administration in February 2020 left Joe Biden the choice only between “End the war or start an escalation”, he assured.

The Secretary of State also accused the Trump administration of having frozen the process allowing Afghans who worked for the United States to obtain a visa to leave the country, and of having left 17,000 cases pending. “There has not been a single interview of a candidate for a SIV (Special Immigration Visa) in Kabul in nine months from March 2020” he said, while Republicans and Democrats alike continue to criticize the handling of the US withdrawal.