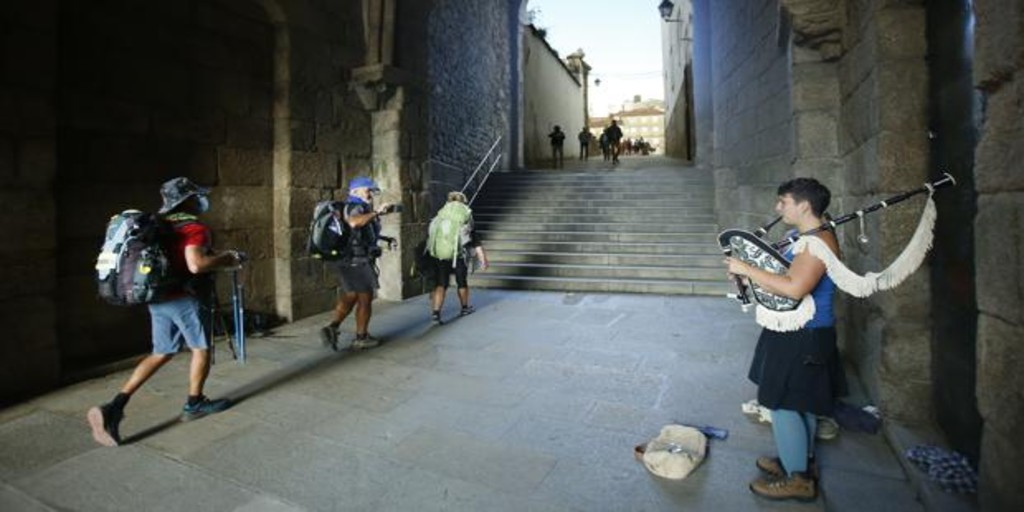 The pilgrim who sets foot for the first time, shattered, in Santiago de Compostela always remembers the music that welcomed you at the end of the road. In the north corner of the Plaza del Obradoiro there is a passage with a stone arch from where the piper plays his instrument. A strategic place that makes the Galician melody resonate throughout the square and guides the staffs (pilgrim’s sticks) to the Apostle’s tomb.

Xoan es one of the twelve musicians who take turns in the arch of the Gelmírez palace so that Santiago’s soundtrack continues like a celtic piped music. Every day around seven in the morning

Compostela pipers gather at the stone arch to “facer or quadrant.” The order of arrival is the one that decides. Names are noted in a sheet of paper that is kept in one of the crevices of the ancient rocks of the arch, that only they know. “There have been times when there were too many of us and we got up earlier. I have come to come to the arch at four in the morning to catch the time », recalls this Galician who has been playing on the margins of the cathedral for ten years.

Shifts are usually an hour and a half a day and their situation is “more or less regularized” since 2014. That year, the Galician capital city council prevented musicians and street artists from playing in the square. An activity that had been taking place for more than 30 years was interrupted for a few days after complaints about noise from the Archdiocese and the Hostal de los Reyes Católicos, near the arch of the palace. It was then decided that the Obradoiro pipers would have to draw a quarterly permit to play on public roads. “It has been tried many times to ban, and many other times it has been reversed. We are one of the few artists who can legally play on the street. In the end, we are free musicians of high quality. Nobody pays us, but we are one more cultural attraction of the city.

Xoan lives only from music, of what people leave “at will”, but he says that it is common for other colleagues to combine the bagpipes “with some other precarious job in the hotel industry, in craft workshops or working on the construction site.” As he says, this summer there have been more people than ever, he does not know if because it is the Jacobean Year, or because “people, after the Covid, had a tremendous desire to leave home.” In winter, however, things change and the group of pipers is reduced by half. “Our schedule starts at noon and they let us play until half past nine at night, but on January 1 you won’t find anyone,” he says.

Xoan does not remember the first time he pressed the skin of the instrument. “They put me in the conservatory since I was little.” At the moment, he is not considering living from any other profession. «What the bagpipe has, and it happens more than with other instruments, is that it shows if you are animated, melancholic or have slept badly. You see it by the reaction of the listener. There are times when people come up and ask you for Metallica songs. A group of Catalans asked me for ‘Els Segadors’, they recorded me with my mobile and made it viral on Twitter. I was very embarrassed. Traditional Galician songs are played here».