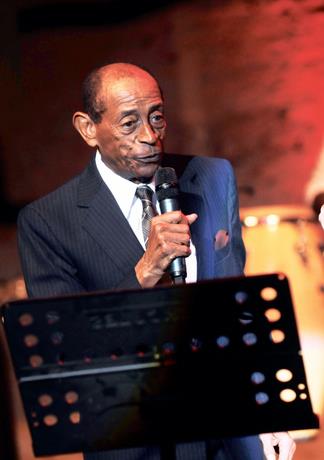 Vinicio Franco was seen having one of his last performances, before a large public, in 2015, when Gilberto Santa Rosa was accompanied by two glories of the merengue, he (Vinicio) and Joseíto Mateo, during the celebration of his birthday number 53 at the Nuryn Sanlley Amphitheater.

That night Vinicio “Mambo” Franco, as he was known in musical slang, at that time with 82 years, preserved his grace and elegance when interpreting the merengue, always pointed with his long finger, which became one of his characteristics when singing.

The Covid-19 on Saturday extinguished the life of one of our great interpreters of merengue, a rhythm in which he earned the nickname of “Mambo”, due to the contagiousness of his vocalization. The artist had been admitted to the Ramón de Lara military hospital in the capital for a week.

Vinicio Franco dies in the middle of Christmas, a time when his voice returned to the radio, since he recorded the album “Merengues Navideños” that contains “Good Night Arrived”, “Aguinaldo a la Sarandela” “Merry Christmas”, “Christmas Brisas “,” Antares de Navidad “and” Alegría navideña “, among others.

Vinicio Antonio Franco Rodríguez was born in Puerto Plata on September 14, 1933. He grew up with the pain of not having known his mother, Carmela García.

His father was a master builder, he was regularly called by the dictator Rafael Leónidas Trujillo to be part of the team of important constructions such as La Toma de San Cristóbal and the Heriberto Peter hospital.

Vinicio being two years old, his father, who had already started another family in Santiago, was torn from his mother’s side and was raised in Santiago with his stepmother and father.

“I never saw my mother, I did not know her because when my father took me with him, he was barely two years old,” he confessed to Ramón Pastrano in an interview on the late television program “Formally informal.” He only saw it in a photograph provided by a relative.

During his childhood his father gave him a guitar, despite the fact that he never agreed with his decision to be a singer or musician.

When he was 15 years old, he came to the capital to work with his father in the construction of the Doctor Heriberto Peter hospital.

In the capital he began to visit bars, where he offered to help the fashionable singers.

So from time to time they allowed him to sing and paid him with alcoholic beverages, which they then exchanged for money.

One day the singer of the floor orchestra at the Yubirí bar got drunk, he couldn’t sing, and Vinicio was asked to replace him that night, and that’s how he started in music.

“One day the Petán barber (José Arismendy Trujillo, brother of the dictator) came to the bar to see me sing and suggested that I go to visit Petán at La Voz Dominicana,” he said.

The next day Vinicio was tested by Radhamés Reyes Alfau (Petán’s advisor) and was hired to study singing and theater, with a salary of 125 pesos.

When Joseíto Mateo left the Super Orquesta San José (the Petán orchestra), led by Papa Molina, Vinicio Franco entered as a singer in the early 1950s, earning a salary of 200 pesos.

“Siña Juanica”, merengue by Félix López with Armando Beltré and Rico López, was another of his successes.

Vinicio formed the main singer of the orchestra of maestro Rafael Solano, according to what he said was with Solano for 46 years. With Solano he traveled different countries “In the Solano orchestra I recorded the merengue” El caderú “, it was with that merengue that I started to use my finger because it was because my father told me that you are half a caderú … and I did not like that father told me like this, ”he said.

In his meringues, Vinicio was also heard calling the oxen: “Ceja give me gusto”, “Come round bolefuego …”.

The artist recorded more than 460 meringues in his career years, nuanced by glorious years in his voice with first-rate orchestras in the middle of the 20th century.

Vinicio Franco recorded 66 years of career, in which he was a contemporary of Francis Santana, Joseíto Mateo, Luis Vásquez and Frank Cruz.

Vinicio Franco is survived by his wife Florencia Rosario and six children.

“The history of merengue loses one of its best cultists, sadly, a refined singer, with an almost perfect tuning, of long standing. We have lost one of the merengue singing gentlemen of all history. My compadre for the rest, I am the godfather of his first daughter and I deeply regret his death, ”veteran Johnny Ventura said with great regret to the LISTÍN DIARIO.

Gamers Discover New Dreamcast Game Based On The Simpsons

the great fight of the Ibn Al Baytar association