His enemies will have to admit at least that Luis Arce is tenacious. One year after the coup that ended the 14-year government of the coca grower Evo Morales, his political heir and architect of the Bolivian economic miracle pick up the baton again. And he does it through the front door after having obtained 55% of the votes in an election in which his immediate rival, Carlos Mesa, former president of the center-right, barely achieved 28%. And that in the first round. Invested president of the Andean country in a ceremony attended by, among others, King Felipe VI and Pablo Iglesias, has had the endorsement of the Organization of American States, the same one that so influenced the collapse of the Movement for Socialism (MAS), led by Morales since 2005 and to which Arce himself belonged.

The new president has risen to power with the support of the indigenous, but also broad sectors of the middle class to whom the eleven months of Jeanine Áñez’s interim government have caused more anxiety than anything else. Due to its inability to attract the most popular sectors and its mismanagement of the pandemic, which has brought with it a 7% drop in GDP and a fiscal deficit of more than 13%, Áñez has joined such an arbitrary management of state security that it has made the authoritarianism of the previous government pale. Repression, corruption and inefficiency is the legacy he leaves behind, after years of promises of reconciliation.

The accusations of “fraud” leveled at the former MAS government and of “illicit enrichment” against the figure of Evo Morales, they have not prevented Arce from taking the cat into the water. His has been a vote not so much of unconditional support for his mentor – who between 2014 and 2016 had lost 13% of his electoral support – as of resistance to the new order, which ignores the peasantry in general and the indigenous world in particular, as well as their traditions and languages, Quechua and Aymara. To change things, the new president has secured the support of David Cochehuanca, a native of Lake Tititaca and, unlike Arce, a historical militant of the MAS.

Nobody is aware that the main argument in favor of Luis Arce –married and with three kids– is its proven value in the economic field. During Morales’ first two terms, his faithful squire managed to make the country grow at a rate of 5%, reducing extreme poverty to less than half and making the gross domestic product go from 9,500 million to 41,000. All this at the cost of increasing public spending, although that would mean shooting up the fiscal deficit and devouring foreign exchange.

Arce now wants to refloat the ship that, he says, Áñez was in charge of torpedoing and wants to achieve it without getting rid of the public companies created in the last decade. His pretends to be a “moderate” socialism in which he invites everyone to participate, but above all with his own personality.. “If Evo Morales wants to help, he will be welcome, but that does not mean that he will be in the Government,” Arce told the BBC weeks ago, in an attempt to distance himself from a Morales who has not taken anything to return to the country from his exile in Argentina. 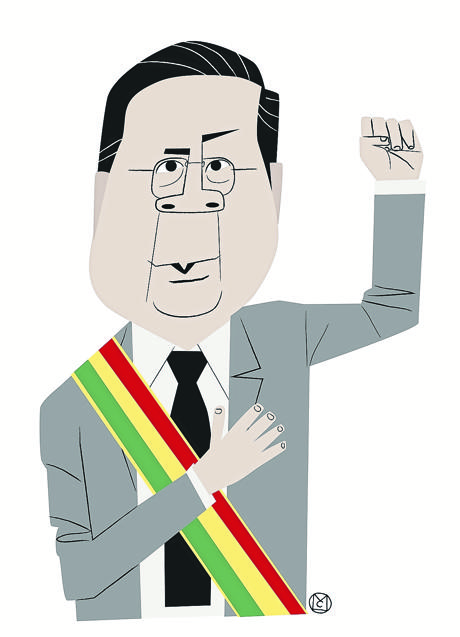 Luis Alberto Arce Catacora (La Paz, 1963) is a man without fanfare, “shy and modest”, also reserved with the family, “to which he has never wanted to expose,” some of his collaborators comment. Long before he was elected Minister of Economy and Finance (a position that only interrupted a couple of years to treat a cancerous tumor in the kidney), ‘Lucho’ was a middle class student – his parents, both public school teachers-, honest and responsible. The ‘crush’ for politics would come after listening to Marcelo Quiroga Santa Cruz, a Bolivian socialist who would be assassinated during a coup d’état at his school. Arce was 14 years old at the time and the ideology that he soaked in there would accompany him throughout his life.

In those days he was never bored. Captivated by the personality of Che Guevara or Víctor Jara, the still adolescent liked to play basketball –A hobby that she still cultivates today– and spent her free time learning on her own to play the guitar, the zampoña and the charango. He always excelled in his studies, first at the Institute of Banking Education and then at the University of San Andrés, where He graduated as an economist and from where he jumped to the Central Bank. There he stayed 18 years. The former president Juan Antonio Morales declared himself days ago the first surprised that someone “who had not risen beyond a sub-management”, ended up being appointed Minister of Economy, and even more president “because of his technocratic rather than political profile.” .

The jump to power materialized in 2006, during the first mandate of the MAS. ‘Lucho’, who at that time frequented a group of intellectuals called ‘Los Duendes’, met Álvaro García Linera there, who would end up being Evo Morales’ vice president. The call was not long in coming and together they designed a strategy based on hydrocarbons, savings and stability that would catapult Bolivia in times of crisis, while the economy of neighboring countries went into frank recession. A bonanza that Arce took advantage of to pay bonuses to pregnant women, schoolchildren and the elderly, while multimillion-dollar investments were made to industrialize lithium and natural gas production.

Arce’s influence was so great that Evo himself –of peasant origin and with a very rudimentary training– he put himself in their hands to take economics classes. The ‘graduate’ Arce, as his students refer to him, had time left for his family and to teach at the University he himself attended. “It is quite demanding, but very capable of descending into reality to explain matter,” they ponder.

Now, ‘Lucho’ has a double challenge ahead of him: show his rivals that the formulas already tested are still valid and that it is more than just Evo’s puppet. Also to convince the international scene that it is not a destabilizing agent for the region. Starting with Chile, with whom the old dispute over the exit to the sea confronts him. No matter how used to the rigors of the highlands, you run the risk of running out of oxygen.