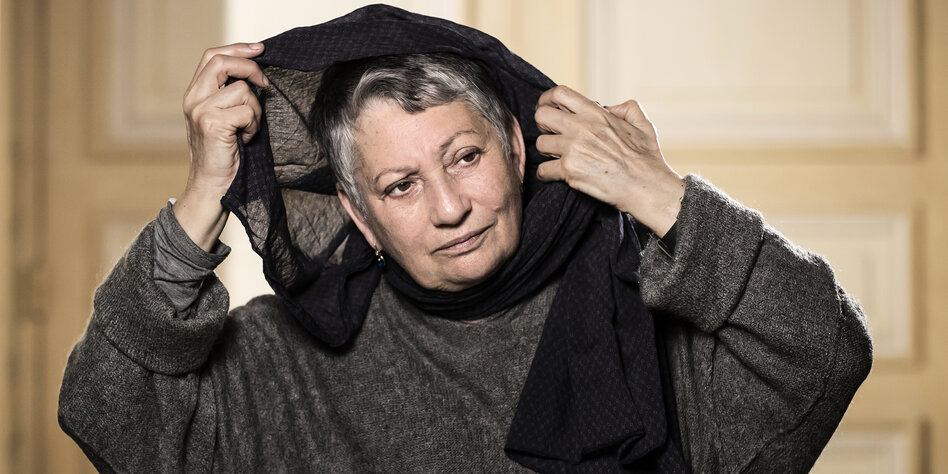 The writer Lyudmila Ulitzkaja worries about her country. In an interview, she explains how the arrest of Alexei Navalny sparked protests across the country.

Is not afraid to criticize the powerful: the writer Lyudmila Ulitzkaya Photo: Joel Saget / afp

taz on the weekend: Ms. Ulitzkaja, you have signed a petition calling for an end to the criminal prosecution of Alexei Navalny and for those responsible for the poison attack on him to be found and punished. Why is your signature so important to you?

Lyudmila Ulitzkaya: Putting my signature on letters of protest to those in power, written on behalf of society, is the only way to express my stance on the ongoing criminal prosecution of Navalny. A few days ago I signed a letter in defense of Yuri Dmitriev …

The historian, who researched Stalinism, is imprisoned for alleged sexual abuse of his adopted daughter. Human rights activists consider the process to be designed to get rid of an unpleasant voice.

… and before that I signed for the defense of those persecuted in the Bolotnaya trial, which deals with mass charges following protests in the run-up to Putin’s inauguration in May 2012. All of this is a testimony to the fact that I – like so many other people in Russia – do not approve of our country’s policy towards the opposition. The rulers must listen to the citizens and must not shut them up.

How do you assess the events in Russia after Navalny’s return?

Society has clearly become more active. I have seldom seen such a uniform outrage from civil society.

You used to take part in protests yourself, today you follow the events on the radio or on the Internet. What changes do you see in people’s potential to protest?

The most important change is the age of the protesters. Many people, including very young people, are now politically active. And maybe it’s the humor too – people are now laughing at the “power”. All of these ducks and toilet brushes show us just that: where there is more laughter, there is less fear.

The toilet brushes have now become a symbol of the wealth of the elites, alluding to Putin’s equipment in the golden palace. There are now protests across the country, including in smaller towns.

The rulers are given a very clear signal that society does not support them. But unfortunately that doesn’t change anything for critics of the regime. The power elite are still unwilling to enter into dialogue with the people. Instead, she arrests the organizers of the protests – but also indiscriminately people who are standing peacefully in the crowd. The rulers are becoming more and more cruel.

Axel Fischer is on the way to Great Britain with his truck. We accompanied him on his first tour after Brexit – read in the taz on the weekend of 30./31. January. Also: Last year, seven women were murdered in Italy within seven days. How could it possibly come this far? And: Why it helps us to rediscover our longing for lockdown. Always from Saturday on Kiosk, im eKiosk or in practical Weekend subscription. And at Facebook and Twitter.

What is Putin afraid of?

No idea. Maybe he feels the end of his power? Most likely he will build a successor for himself so that he can lead him out of his bunker like a puppeteer. All organs of power carry out their functions: the police dissolve protests by beating citizens with batons, judges are preparing for trials against people who go to rallies. Prison guards are likely to increase the space in the detention centers. Nobody can predict what will become of all this.

Do such events as the poisoning of Navalny, his arrest at the airport, the trial at a police station give thought to those who had previously little dealt with Navalny?

I myself feel disgusted with leadership types who have come up with a number like this. And I think that millions of Russians share this feeling with me.

Are you impressed that Navalny decided to return to Russia? In full awareness of what to expect here?

Alexei is a brave person. I think that as an opposition politician, he simply had no choice but to come back. Not going back to Russia after being poisoned would have meant admitting defeat. In my opinion, he acted the only way he could because it is the only real thing for a self-respecting person.

born in 1943 in Dalekanowo, Bashkiria, Urals. She grew up in a Jewish-Russian family in Moscow. In 1983 she published her first collection of stories in the state children’s book publisher. In 1992 she became known beyond the country’s borders with her story “Sonetschka” and received the French literary prize “Prix Médicis” for it. Her books (“The Lies of Women”, “The Green Tent”, “Jacob’s Ladder”, etc.) have been translated into twenty-five languages.

… For many people in Russia, Alexei is a symbol of dissatisfaction with the current balance of power. But I don’t think that he is the best alternative to Putin.

Who would be an alternative?

I would like to see educated people at the top of Russia. Professionals who have no ties to criminal structures that are not infested with the demon of greed. But I’m afraid I won’t see that again. Let’s take a look at Nawalny’s new revelations: murderous! However, I did not imagine the current rulers, their moral level and their aesthetic understanding any different.

Writers, actors and even athletes are now calling for protests against the system. What role does the cultural scene play in these events?

“Cultural scene” is a broad term, as there are freelancers like me, but also artists who depend on the state’s salary. It is much more difficult for people like this to express oneself in protest, let alone demonstrate. I’m not active in any creative union, I’m just a member of the local PEN club. I also signed the club’s letter of protest because I always use my name to stand up for the freedom of everyone. There are all kinds of cultural workers here. Some downright adore the regime, others are droolers; they don’t care who the boss is. And there are honest people who are ready to speak their true opinion. Ultimately, it is the sum of all these votes that will be decisive. The “power” is becoming more and more cruel, and nobody wants to get into the clutches of sadists and marauders.

Are you inspired by the events of the past weeks and months in your work?

Not at all. The events are not inspiring, they are rather alarming. We have just followed the events in Belarus with excitement and were even a little inspired. But apparently a little premature: the dragon has not yet worn its teeth. He swallows, chews and digests perfectly. Oh, how much has been written about the wickedness of those in power in all the literatures of the world! No, it doesn’t help, it doesn’t heal. But at least it illuminates the picture of those who want to see this picture too.