Hollywood stars Margot Robbie y Cara Delevingne They staged a violent episode last night in a restaurant in Buenos Aires, when two men in charge of their personal custody attacked and hospitalized an Argentine paparazzi who photographed them. The complaint was filed in a police station in the city of Buenos Aires and the aggressors, two men of English nationality, They were detained early this morning..

According to official information, as a result of the attack the photographer Pedro Alberto Orquera had to be treated at the Argerich Hospital for a open fracture of the right elbow. Both actresses were in the country incognito.

The facade of “Patagonia Sur”, an exclusive restaurant in La Boca, in Buenos Aires, which works behind closed doors

According to the police report to which he agreed Infobae, the violent situation took place after 1 am today in “Patagonia Sur”, an exclusive restaurant in La Boca, in Buenos Aires, which works behind closed doors. The complaint states that Orquera photographed Margot Robbie and Cara Delevingne without his consent and, because of it, he was attacked by Jac Rhis Hopkins and Josei Mac Namara Callum. Personnel from the 4C Neighborhood Police Station appeared at the intersection of Rocha Street and Pedro de Mendoza Avenue after calling 911 in which they were alerted to an incident on public roads. The officers found that there was a person injured with a broken arm and a bleeding wound on the scalp, a condition confirmed by the hospital doctor who diagnosed polytrauma in the right arm and neck.

The incident occurred when Orquera tried to take a photo of Australian actress Margot Robbie and British model Cara Delevingne in a restaurant and his guards attacked him. The victim expressed, after the intervention of the police officers and his hospitalization, the desire to denounce and urge criminal action for the attacks suffered and minutes after three in the morning on Sunday, October 2, the arrest of the custodians was validated by order of the South Flagrancia Unit, in charge of the assistant prosecutor Catalina Neme, for “serious injuries”. The victim is still sedated and admitted to the Buenos Aires health center: he will have to undergo surgery for his elbow fracture.

The presentation of the cast of “Amsterdam”, in London, in a photo of September 21 (REUTERS / Tom Nicholson)

From the prosecution, they ordered the rigorous measures according to the criteria set out for cases involving injuries, such as the “verification of the state of consciousness and possible toxicities through non-compulsory tests”, the statements of victims, doctors, prevention personnel, the photos of the injuries, the epicrisis and clinical history, the survey of private cameras and the film records, as well as the application for immigration status of the accused. Sources close to the Public Prosecutor’s Office of the city of Buenos Aires assured that Juan Mahiques, attorney general of the City, instructed the prosecutor of the case to apply the law with the greatest rigor.

Sources close to the investigation reported, in turn, that Robbie and Delevingne have a flight to the south of the country for Sunday afternoon, but they cannot be escorted by the two bodyguards who were charged. 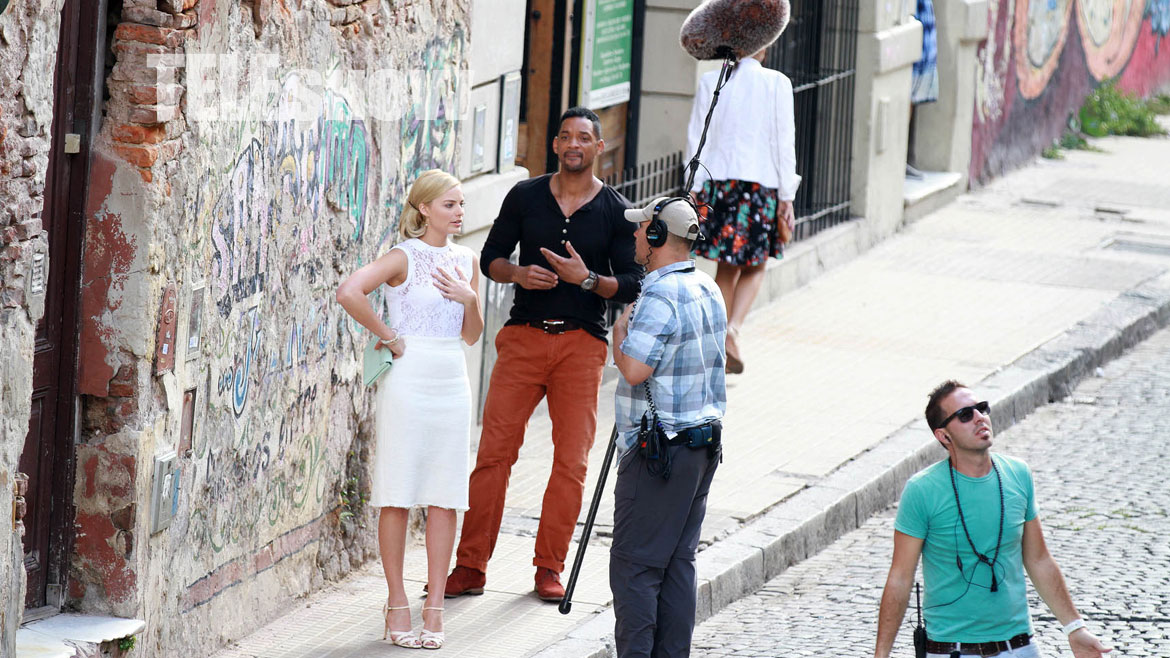 “Margot Robbie is in Argentina and we can’t help but ask you…”, said the tweet that ratified the leaks. When from the official twitter of Warner Bros, Pictures Argentina, they confirmed on September 30 that the protagonist of The wolf of Wall Street y once upon a time in hollywood, among other films, was in Argentina, social networks were filled with memes waiting for a photo to confirm that the Hollywood celebrity was actually walking through some city in the country. Until now, no photo confirmed the presence of the actress in the streets of Buenos Aires.

Opening next week is Amsterdam, a comedy directed, produced and written by David O. Russell, and featuring an all-star cast led by Christian Bale, John David Washington and Margot Robbie. The film, a tone of suspense and comedy, tells how three friends (a doctor, a nurse and a lawyer) become the main suspects in the murder of US Senator Bill Meekins. The Australian actress, born on July 2, 1990 in Dalby, is not in Argentina on a press trip. Her excursion obeys a criterion of leisure.

It is not the first time he has visited the country. Nine years ago he did for professional reasons. filmed Focus, also starring Will Smith, directed by Glenn Ficarra and John Requa and launched in 2015, between November and December 2013, in the warm spring in the city of Buenos Aires. The film was shot outdoors in neighborhoods such as Recoleta, in the San Telmo Market, in the Faena Hotel, located in the Puerto Madero neighborhood, in Caminito de La Boca.

Canada’s Rehabilitation Museum and the Ideology of “Decolonization”

“At gunpoint” gets this figure of revenue