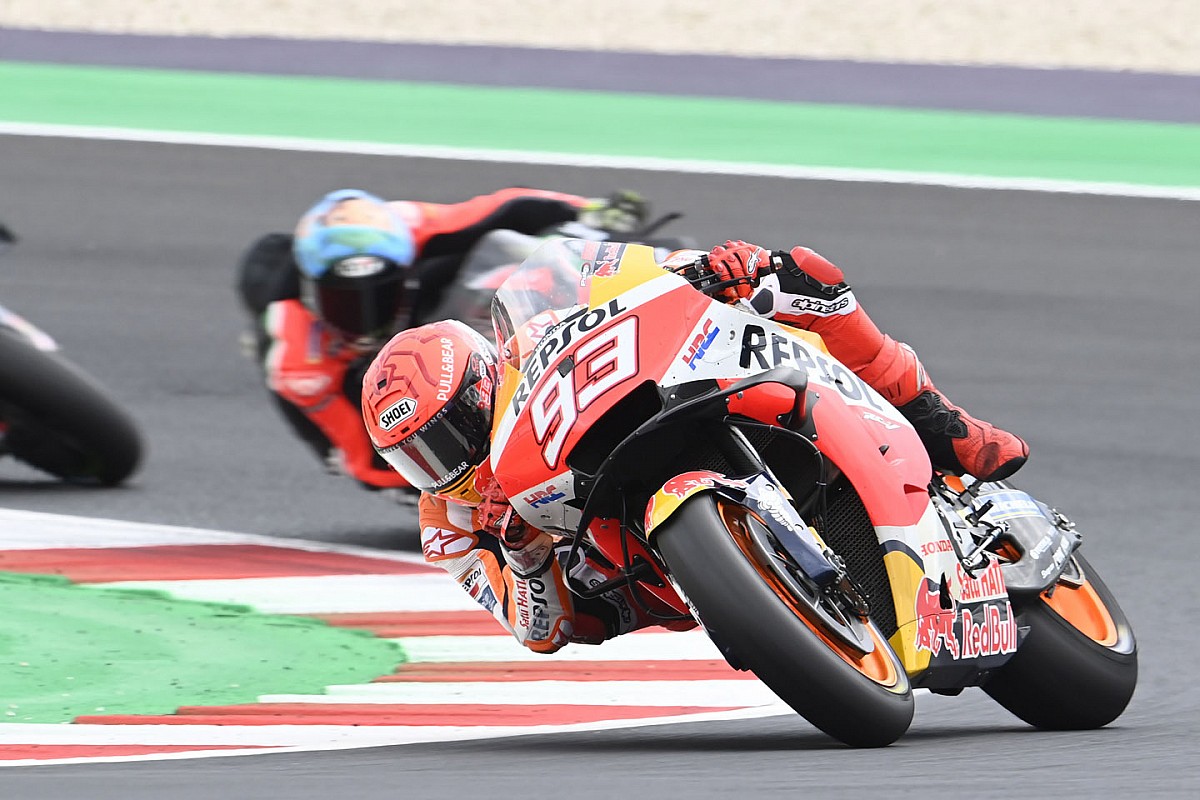 Seven days after his second podium of the season, Marc Márquez still notched a good result at the Grand Prix of San Marino. The Spaniard couldn’t fight for the lead this time around but he took fourth place after coming out victorious in a fight with Jack Miller and Joan Mir on the very last lap, a better result than goals he had after qualifying.

“Obviously I’m happy because I finished better than what I imagined before the race”, explained Márquez. “Yesterday I said my position would be between fifth and seventh and we were able to finish fourth. I’m happy because I didn’t feel very well in the first part of the race, but I was able to manage it well and do some good lap times at the end, with good feelings in the body. “

Even if this result is not as spectacular as the second place conquered in Alcañiz a week ago, it has more value in the eyes of Marc Márquez. The MotorLand is mostly made of turns to the left which saves its sore arm, while the Misano has a majority of turns to the right. The Repsol Honda rider has thus proven that he can perform well in unfavorable conditions, after showing a glimpse of it at the Red Bull Ring, but he will not be satisfied with performances of this level for long.

“Obviously this fourth place is more important than the second last week. It has more meaning. But my goal is to fight for the victory and we are still there. For example today, ok I have finished fourth but I felt far from the pace of Bagnaia and Quartararo, and Bastianini too, he was very good. Today I realized that I have to improve my physical condition and that I am not 100%. “

Marquez “seized the opportunity” in the last lap

It was thanks to a good approach that Marquez saw the finish at the foot of the podium. Starting seventh, he oscillated the entire race between fourth and sixth place, preferring to delay in order to save himself physically. The # 93 was fifth at the start of the last lap and was passed by Joan Mir, who took the lead over Jack Miller a few corners ahead. The two men got in the way and Marquez was able to infiltrate to regain fourth position, containing the Suzuki and Ducati up to the checkered flag.

“I’m very proud of the last part of the race because Joan followed me. In practice it was the other way around, I was following Joan but in the race he was behind me and I allowed him to fight with Jack. I was quick and felt great. In the last lap I couldn’t see myself able to fight but Joan passed Jack, they came out wide and I just took the opportunity. For example, I made more efforts in Aragón than here. I was just like ‘Okay I’m sixth’ but when they came out wide I took the opportunity. “