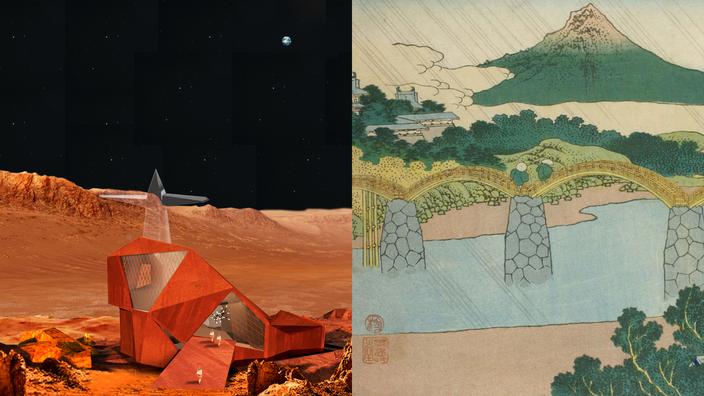 The Aguttes house will take off on February 8 in digital spaces for a virtual auction. A trial balloon innovation for the art market.

NFTs give hands to the metaverse. The «non fungible tokens» (“non-fungible tokens”), these traceable and certified digital objects whose trade has taken the art market by storm continue to flourish around the world. And beyond. In Paris, an unprecedented auction of digital works of art will open on Tuesday on Saint Louis Island, as well as in the interactive virtual universe of a metaverse. A first, assure the organizers.

With a “auctioneer and bidders physically present in the metaverse who will interact as in real life, this will be the first such auction in the world”, unlike online auctions, organized everywhere under the name “metaverse” but who are not there yet, assures the Aguttes auction house which organizes the event. This will not be its first attempt with NFTs: in December, the house had already organized the digital sale, for 107,000 euros, of the first SMS in history.

This time, Aguttes is aiming higher. In partnership with the Charlot gallery, the NFT ArtAtak platform and the LaCollection.io platform, certified by the British Museum, the auction house has imagined a hybrid auction. With an estimated starting price of between 500 and 70,000 euros, the various NFT works will go on sale on Tuesday 8 February. The public will be able to attend this sale wherever they are thanks to the metaverse, with or without a virtual reality headset. The public will be able to admire them parallel in a space of 1000 m2 replicated in the metaverse, accessible from a smartphone, tablet or computer. Around fifty digital visual and sound works of art by around twenty artists will jostle there. Emerging contemporary artists, mostly, as well as several classic prints by Hokusai (1760-1849).

Read alsoHokusai’s Japan or the Revolution of the Levant

The Japanese master clashes somewhat in the futuristic and refined world of sales. His works, still physically preserved in the British Museum, are offered in certified authentic and limited edition NFT copies. “It is a form of investment, which secures the belonging and provenance of the works, and which arouses new patrons”, explained to AFP Valérie Hasson-Benillouche, pioneer of digital art and founder of the Charlot gallery. A principle that has won over other European museums, such as the Hermitage in Saint Petersburg, or the Uffizi Gallery in Florence.

Franck Hollywood, Sabrina Ratté, Hélène Nepomiatzi or even Chun Hua Catherine Dong form some of the current artists offered for sale. Among the contemporary works, a unique 3D creation stands out in particular. An ocher and gray cathedral, with hard angles, set in a twilight and unreal landscape. This strangeness has its reasons: titled The Metacathedral, this creation by David Pons, “first station of a religious global Metaverse”, was imagined for the planet Mars. Its sale will be dedicated to the restoration of the Latin Chapel of the Holy Sepulcher in Jerusalem.

Read alsoKnights of the Order of the Holy Sepulchre: “For the glory of Christ and in the service of the Christians of the Holy Land”

Created from a physical reality or algorithms, all these works have been digitized and made immaterial by the magic of new technologies. “Each one has a certificate of ownership and authenticity called a non-fungible token (the famous NFT, Ed.), which makes it valuable”, told AFP Maximilien Aguttes, development manager of the auction house founded by his father. This revolutionary little digital object “is recorded in the “blockchain”, a kind of internet safe allowing the coded backup of works, their tracing and their certification”, also specifies Valérie Hasson-Benillouche. What for ?

“It is a new tool at the service of art, which gives artists access to new forms of creation, to infinite possibilities, and allows them to make themselves known.Valérie Hasson-Benillouche told AFP. They seized it in all areas.The organization of the event in the metaverse also allows the public to dialogue with certain artists and curators in real time. And this from all over the world. The sale itself will take place in the virtual world in the same way as in real life. A way to ensure some familiar references in a digital event to which few people are still accustomed.

“A double “meta-clerk” of the auctioneer will be at the disposal of the bidders, who will have identified themselves beforehand and can manifest themselves by raising their arm or by jumping into the metaverse“, developed for AFP Anton Toledano, technological and technical designer of the event. France only allowing the sale of material goods, “the intangible work acquired will be delivered in the form of a USB key to the purchaser and his NFT transferred to the blockchain”, specifies in turn Maximilien Aguttes. The process, new and hyperconnected, will perhaps confuse the most seasoned collectors from the traditional sales circuits. The auction house made no mistake about it and is aiming instead for “new technology-savvy, often young, NFT-initiated collectors and investors”. The product expected from the sale, on the other hand, will remain ringing and stumbling.

no to totalitarianism and dictatorship!