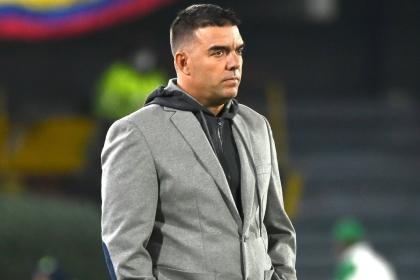 Martín Cardetti appeared after his departure from Independiente Santa Fe. The Argentine coach was dismissed from his position due to poor results in the BetPlay I-2022 League, and the last defeat, 2-1 in the classic against Millonarios, caused him to leave.

The coach was accused, in malicious versions, that he invented injuries so as not to align some footballers. Those statements made Cardetti react this Thursday, April 28, for which he stated in a forceful statement.

“Claims that some injuries were ‘invented’ to affect starting players are false, light and malicioussaid Cardetti, who revealed that when he took over as white-haired coach, in January 2022, eleven players were reported with injuriesor 30% of the campus.

Cardetti took responsibility for the poor results, citing self-criticism and respect for the team and the fans. Likewise, he rescued his will to promote players from the academy, mentioning six U-20 soccer players.

Martín Cardetti referred to the Santa Fe players and divided the group he led until last Sunday into two groups. A) Yes, thanked “the players whose commitment, discipline and professionalism contributed to this sports proposal”.

He then issued a strong recommendation to another group of players, without mentioning any proper names. “I make a respectful call to the players who still do not measure the greatness of the lionso that they understand that on their shoulders they carry the colors of one of the biggest teams in the country”, Cardetti sentenced.

Communication to public opinion regarding false and malicious information circulating on social networks and some media about the work of Martín Cardetti at the Santa Fe Independent Club: pic.twitter.com/iBtYZDMyyD