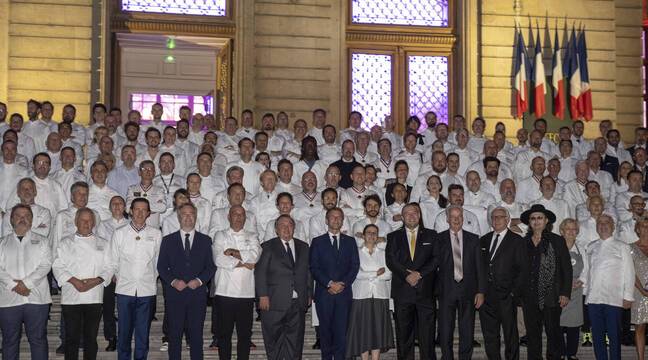 Will the “Dinner of the great chefs” turn into controversy? Invited to this prestigious reception in the presence ofEmmanuel Macron Sunday evening at
Lyon, the chef of Martinican origin Marcel Ravin was finally turned away. Discrimination according to him, a regrettable error according to the organizer.

This starred chef from a restaurant in Monaco had a proper invitation card when he presented himself at the Rhône prefecture, where the evening organized by GL Events was taking place on the sidelines of the International Catering Fair (Sirha). This document, which he produced on social networks, indicates that the President of the Republic, the boss of GL Events Olivier Ginon and Jérôme Bocuse, president of the Bocuse d’Or gastronomic competition, asked him to participate in the dinner offered in the honor of great chefs and pastry chefs. But he was refused entry to the premises by staff assigned to control guests.

“They told me that I was not on the list and their manager did not want to know anything”, affirms Marcel Ravin, “shocked and disappointed”. “Sad evening. Be invited and end up on a sidewalk to eat an andouillette. […] And they explain to me that we are no different. I’ll tell you what humiliation is, ”he wrote on Facebook.

“I hope that our profession will come together and that no chef recognized by his peers will ever be left on the doorstep again. I want to believe that the organization of this event apologizes for the lack of consideration “, he added, while the president of the territorial community of Martinique, Serge Letchimy, denounced” an unacceptable act “.

For GL Events, “there is nothing orientated about it”

Asked Monday evening, GL Events spoke of “an unfortunate error”. “We regret this obviously unintentional incident on our part, there is nothing orientated about it”, declared Luc Dubanchet, director of the Sirha Food brands. According to him, “a priori”, Marcel Ravin did not appear on the lists because he had not responded to his invitation. Other people were in his case Sunday evening, “for whom we were able to make up for it because we were warned”. “But there, we were not made aware, alas,” added Luc Dubanchet, apologizing from GL Events to Marcel Ravin.