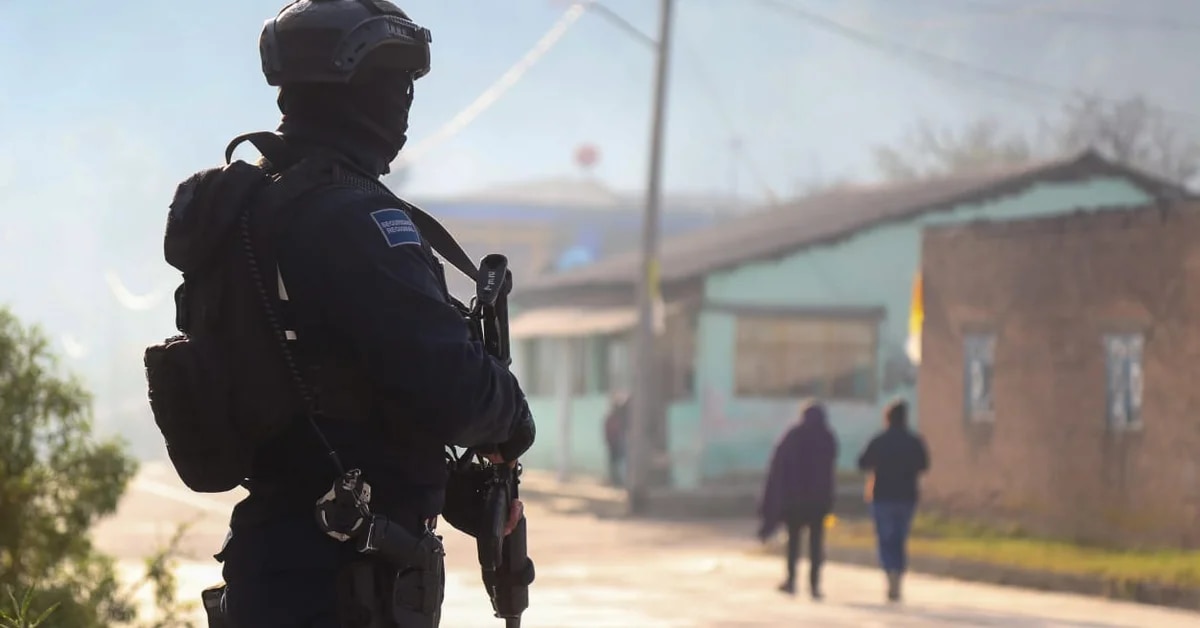 Authorities immediately moved to the area of ​​the events (Photo: SSP-Michoacán)

A video circulating on social media shows a group of hit men from Michoacán who brought together at least a dozen people in front of a wall and then they were executed in cold blood, in full sun.

After going viral, personnel from the Michoacán Public Security Secretariat (SSP) announced in a statement that elements deployed in the town of San José de Graciabelonging to the municipality of Marcos Castellanos, where the attack was reported.

They also reported that in the area bordering the state of Jalisco An operation was orchestrated in conjunction with agents from the Secretary of National Defense (Sedena) and the National Guard (GN).

Around 5:00 p.m. this Sunday, February 27, the tour of state and federal security forces began with patrols on highways, gaps and surrounding towns in order to prevent further acts of violence.

Upon arriving in the area, the authorities did not find bodies, but they did find a clean street and cleaning products (Capture: Twitter/fernand17704066)

What’s more, began the search for those possibly involved in the aforementioned illicit actswhile in the area of ​​the events, investigations began to clarify the facts and determine the number of victims.

Finally, the SSP asked all the citizens of the region to have information about what happened in San José de Gracia, to join the investigations by handing them over to the corresponding authorities, or to the emergency number 911 and the number of anonymous complaints 089.

For its part, the Attorney General of the State of Michoacán (FGE), reported that they opened the investigation folder related to the facts occurred in the municipality of Marcos Castellanos.

The hit men would have taken all the bodies after cleaning (Photo: Sedena)

Staff of the Prosecutor’s Office, attached to the Specialized Crime Scene Unit (UEEC), he moved to Reforma Street to carry out the first investigations.

According to the data of their experts, they revealed that the execution area was freshly washed, and no victims were found. What they did find was a bag containing various containers of cleaning products.

They also confirmed through a statement that the Both state and federal authorities are already searching for the bodies of the victims.

The authorities launched an operation to find those responsible and the bodies of the victims (Photo: SSP-Michoacán)

They revealed that all the bodies, without exception, would have been removed immediately of the place by the same assassins who committed the execution, or by people related to them.

On the other hand, a motorcycle and two vehicles that had damage from a gunshot were seized, although for the time being it has not been revealed who they belong to.

Authorities invited the population to give evidence that could lead them to those responsible for the massacre (Photo: SSP-Michoacán)

The recording of the crime appeared on social networks on the afternoon of February 27, 2022. In the images, you can see a heavily armed commando that shoots at least a dozen people, according to preliminary reports.

The victims allegedly attended a funeral, according to unofficial information, but they were interrupted, and formed outside a home to later be executed in broad daylight and in front of several witnesses.

In addition to carrying large-caliber weapons, the gunmen wore tactical gear and moved into various vehicles from which they fired.

CJNG threatened the governor of Michoacán for alleged support for Carteles Unidos: “Don’t forget the commitment”
Confrontation between the military and the Michoacan Family left two dead in Zitácuaro
The nebulous history of avocado in Mexico: the “green gold” that transits between the economy and the siege of drug traffickers

Towards a “historic” humanitarian crisis in Europe

the announced program, the information