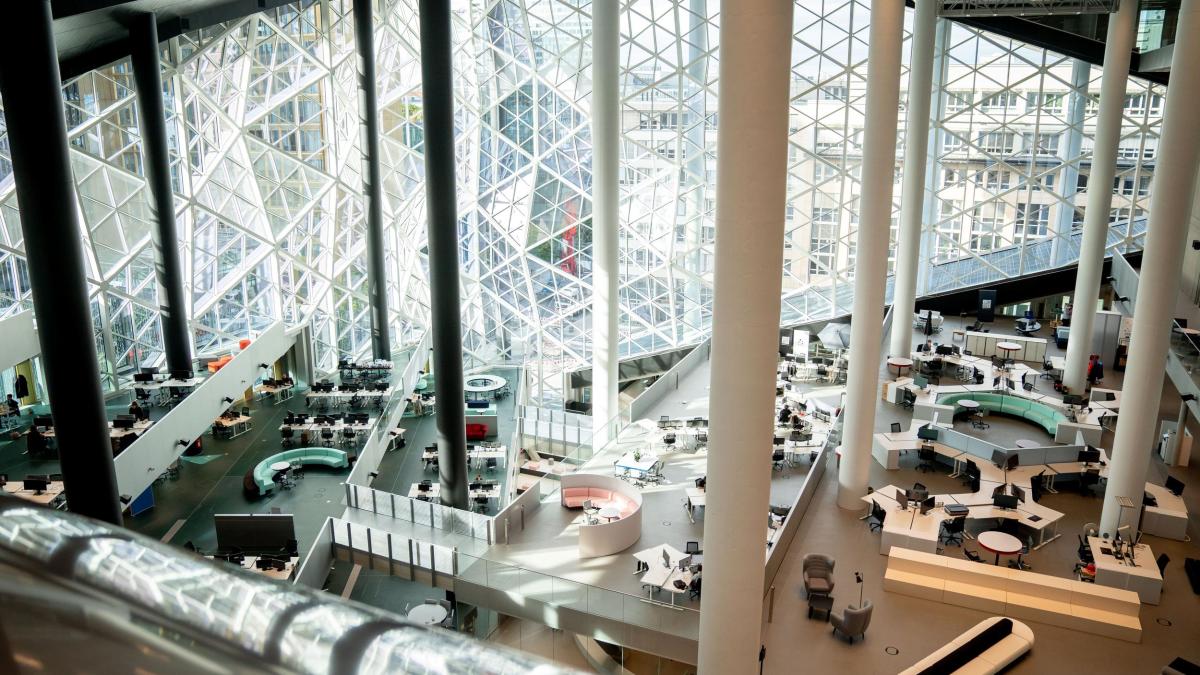 “Rem, you make thousands happy who work here every day”

Today is the real opening of this building with the people who work here. I hope that you will enjoy the evening and that you will stay until after midnight, because tomorrow is October 6th, and this day happens to have a special meaning in connection with new buildings at Axel Springer.

On October 6, 1966, the golden tower across the street was inaugurated. Construction of this building began on October 6, 2016, and on October 6, 2020 we celebrated the small inauguration with Federal President Frank-Walter Steinmeier and a small group of people. But that was far from real life and without the people who are most important here: you, the employees. So today we’re celebrating the real opening, and it’s a very exciting moment.

I would like to read something from May 27, 2013. On this day we gathered all architects here in Berlin to hold a first briefing about the architectural competition for this building:

“We think this project is fascinating for two reasons. One is the conceptual element of the project. A very fascinating question for architects. It’s about defining the role of office space in a world where an office is actually no longer necessary. At least in our company, which is not about the production of any goods, but about intellectual property. A good story may be better written on the beach, in a café, at home or in another country than in an office in Berlin. Why does one have to sit in an office to make a presentation for an advertiser? Almost everything in our industry can be done elsewhere.

What is the reason people go into an office? It’s about communication. It’s about exchanging ideas. It’s about getting better in a team than alone. But what attracts people? I recently met someone who said, ‘I don’t expect privacy when I’m in an office. I’m public in an office. But when I go out, when I’m on the street, then I’m private. ‘ So there are interesting changes in perception.

I can only raise questions: What role do space and the material play in an immaterial economy? What motivates people to go to the office every morning? How can we combine private and professional needs? And what about the work-life balance? And that’s why I don’t even know whether the idea of ​​the individual office, but also these large loft-like floors, on which hundreds of people sit next to each other, are not out of date. What does the inspiring workplace look like for journalists, marketing staff and developers who work in a creative industry? That is our key question to you. I ask you to think about it and redefine this in a radical and innovative way.

The second challenge is one that applies to any large building. It’s an aesthetic one – and I want to be very brief here. We want a breathtakingly beautiful building. How you define beauty is another question. But it should be so nice that car accidents happen in front of the building! “

Now this beautiful, huge building has been erected, which in 2021 looks like it was designed in the knowledge that the pandemic and the consequences for a new way of working, for home office and hybrid work models, are coming.

So if we need a definition of what a post-Covid office should look like and how people can be motivated to come to the office and want to come to the office despite working from home, then this building is it. You won’t find the old definition of a desk for every person, there are job opportunities everywhere. That is exactly what we need in a post-Covid office. There is an infinite amount of space, a lot of fresh air and an inside that almost looks like an outside or is almost outside. The transitions between inside and outside are very fluid. This also includes the spectacular roof terrace. And probably the most important thing is the many opportunities to meet each other. They are everywhere. There are the cozy corners, the large conference rooms, lounges and many other places where people like to get together. And then of course there is the beauty that motivates people emotionally to go into this building.

Here in this place you, Rem, have really achieved everything and more that a building can do nowadays. We are so happy about the effect this house is already having on the employees.

In addition, this building fulfills a dream of our founder Axel Springer. He built this golden tower right here on the wall when this wall literally separated the west from the east on this street. His dream has always been that “one day I’ll be in the middle of a reunited Germany with my publishing house. In a Germany where Berlin is the new capital ”. And now we have this symbol. This new building as part of the complex that bridges the gap between east and west. You can have lunch in the east and hold a meeting in the west and vice versa. The building is also a symbol of the fulfillment of Axel Springer’s lifelong dream: reunification.

Rem, I can’t thank you enough for what you did. You make me happy every day when I look at this building and I think you make happy thousands of people who work here every day. Thank you very much for that. “

Greetings from the architect Rem Koolhaas

In 1989 the wall fell … and the market economy was unleashed. In that year the word “Starchitect” – star architect, archistar – was invented. Was that a coincidence?

Not really. There is a connection: In order to please in the new economy and to survive in it, it was not enough for an architect to only show good intentions – we had to create something exciting, even sensational, we had to invent, design … the more unusual , the better.

The star architect is, by definition, a terrible person! He is a perfect offspring of neoliberalism, interested only in his own ego, he arouses the worst instincts of his customers, is completely indifferent to the needs of users, does not care in the least about the residents of his building. What drives it is just the effect it creates.

That was more or less the situation when Springer announced the competition for this building in 2013. But Springer – that is, you – were actually lucky. Even as star architects, we began to realize that shape was overrated – why should we just make the outside rather than the inside “interesting” so that the real users of the building couldn’t enjoy it?

They really were important to us. We thought about how we can make you happy.

We imagined what it would be like to live here, to work here, to eat here and to interact with one another, about the surroundings in which you would like to meet or be alone, how you would most like to relax.

We wanted to bring so many options into a single structure just so you could enjoy them. We thought about the variety we could offer you, we even took care of nature on the roof.

And you, too, were very lucky with your team.

Are concerns a German specialty? Are the Germans professionals in worrying? This is how it looked at first, but over the eight years that it took, seriousness slowly gave way to support, and even, in small, discreet doses, to ease and enthusiasm.

After all, you were very lucky with Mathias Döpfner – if, deep down, I am a good person, then deep down, he is an artist.

A secret futurist. Who else would dare to formulate their architectural wishes as follows: “We want a breathtakingly beautiful building … it should be so beautiful that car accidents happen in front of the building!”

Who would, seriously, announce, with so much reputation at stake: “We are looking for radical proposals. Radically modern, radically visionary. And yes, radically beautiful. “

When it came down to it, Döpfner was on the side of beauty. He was critical, but in critical moments he supported our vision. I’ve seen with my own eyes that it makes him happy to have created a building that makes you happy.

And so my final advice is this: this is a place to be enjoyed … please enjoy it.